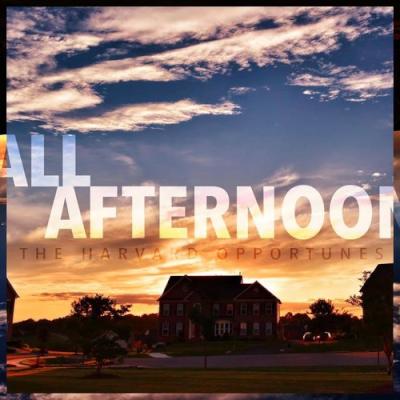 Sophisticated with a whole lot of spirit: these are the best words I can use to describe All Afternoon. The Harvard Opportunes have crafted a unique work of art with their latest studio album and it's sonically pleasing, artistic, and vibrant. The group's imagination is on full display from beginning to end with their fascinating arrangements and nearly effortless singing.

What the Opportunes truly excel at in All Afternoon is their ability to take highly mature arrangements and deliver them with the liveliness and vivacity of a youthful college group.

With this project, it's simple to see that the music comes first for the group. As a whole, arrangements are polished, ambitious, and often times surprising. Electric Lady and American Boy, two tracks featured in the first half of the album, are prime examples of the group's craftiness and attention to detail.

Electric Lady has a catchy throwback groove that stays rocking throughout thanks to a bouncy bass line, tight harmonies, and quick hits offered by the higher vocals. The song is also jam-packed with a plethora of buildups and a twinge of jazz that adds color and substance.

American Boy is ambitious with its complex chord structures, multiple tempo changes, and overall feel which does a balancing act between dark and cool. At times the song is sassy and cabaret-esque when the lead is steering the ship, while other times it's fun and nonchalant, as seen by the male chorus in the bridge.

Both tracks are a major win for the album.

The Opportunes' true vocal abilities come into full view with their rendition of Thirdstory's Grows Old. This arrangement is incredibly beautiful as it fuses so many elements, from a short solo to old-school harmonizing to body percussion to one thumping bass. The emotion of the song is so real and authentic as the Opportunes place no restrictions on dynamics and conviction. It's all a bit indie and new age; it's even soulful as multiple members belt in the background near the song's end. To not fall in love with this piece is nearly impossible.

Even with more popular tracks such as If I Ain't Got You and Adventure of a Lifetime, the group is capable of adding a slight twist in the tone or feel — or simply just singing the heck out of the track to make you feel that it is an Opportune original.

While All Afternoon gets so much right, the disparity between tracks that are done exceptionally well and those that are just ... good, is pretty big. The major show-stopping songs have a certain element of surprise and explosion of vocal ability that leaves one slightly unimpressed when arriving at the less phenomenal numbers. This would be the primary critique in what holds the album back from propelling into that next level of really stellar work.

Either way, there's so much to love about this body of work, and thus the Opportunes should be proud.

I've probably listened to this album a dozen times while trying to write my review for All Afternoon. However, after each listen, I keep having the same recurring issue: I'm having problems remembering what I've heard. That's not to say that there's anything about this album that's bad —  All Afternoon is a collection of songs that are performed well, but a lack of uniqueness in group identity prevents this album from standing out in the pack.

Starting at the top, Electric Lady sets a groove. Eli Schleicher's arrangement is all about providing a background for the soloists without oversaturating the feel. The majority of the drive is given by the bass and the percussion, keeping everything in the pocket. However, these parts feel rigid in some ways. I can almost hear the bass vocalist thinking about the part, making sure every beat is exactly correct, rather than trying to feel the groove. The rhythms are complicated, but every note is heard at the same level rather than flowing. The percussion has the same issue in the opposite manner: the rhythms are simplistic for the most part, more providing a metronome than a beat. Neither part is wrong in its method, but the result feels more like a manufactured rhythm section. Perhaps it is a personal preference, but adding a bit more of the human element to let the groove flow more naturally would take this arrangement and really propel it to the next level.

Across the board, I really like a lot of the soloists on this album. Eli Schleicher does a phenomenal job on Phoenix of just letting loose. There are a plethora of little runs all over the place that keeps everything interesting. The shift through the passagio is incredibly clean, keeping an almost soulful countertenor sound relevant and strong when it needs to be and a floating falsetto for the high notes. Patrick Tan's arrangement lets the soloist shine through everything, taking caution not to overpower the lead, especially when in a range with natural volume. One of the highlighting features of this album is that throughout each track, the different soloists offer a unique personality that doesn't strive to be a carbon copy of the original, but rather lets his or her own personality shine through.

The juxtaposition of these two thoughts create the issue for All Afternoon. On the surface, I want to like this album — the soloists are great and there are no blatant flaws in the album. However, there is nothing on this album that screams that only the Harvard Opportunes could pull off this work. There are no defining characteristics of the sound that make these tracks unique, nor material selection similarities that are blatantly obvious. However, to create such stylistic choices is a risk. Without the risk, there's no reward. This album is risk-free and well-executed. It's good enough for a few listens, but perhaps not the major impact this group sounds perfectly capable of performing.

The Harvard Opportunes' most recent release, All Afternoon, gives listeners a solid album they can listen to on a cloudy winter ... afternoon.

All Afternoon is not an album of club bangers, but one dominated by low-to-mid tempo songs that you might pull out if you're not feeling your best. It gives listeners the nostalgia of songs from artists such as John Mayer and Estelle, and the familiarity of songs from artists who have been on the charts over the past few years, such as James Arthur and James Bay. The ten tracks span nearly twenty years of pop music, so it is bound to have a track you like or at least recognize.

The biggest strength of this release comes through tracks such as American Boy and When We Were On Fire, which are well executed and build on the original songs. The American Boy arrangement tastefully builds on the original by infusing jazz and swing elements into the song. I enjoy the approach the group takes with Kanye West's bit from the original. I should also mention the soloist, Nora Sagal, who is a perfect fit for the track — I was actually surprised not to see her listed as an arranger of the song, because the song fits her voice so well. Sagal is perhaps the strongest soloist on an album with multiple talented singers. When We Were On Fire, although less innovative than American Boy, is well-arranged and well-executed. The second half of the song has a contagious build of stomps and claps, followed by beautiful choral swells. Toni Divic does a stand-out job with the solo, and the background vocals match his intensity without being distracting.

The album drags a bit through songs such as Ordinary People and Adventure of a Lifetime. Not because they are bad songs, but because they lack the intensity and engagement of other tracks. Ordinary People does not keep the listener's attention. The soloist does a good job, but on a ballad with so much potential I want more — more intensity and innovations to draw listeners in. The track also has moments where it drags and moments where the background distracts listeners from the soloist. Adventure of a Lifetime equally struggles to reach beyond mediocrity. It's an uptempo song from a well-known artist (and I would have even liked a couple more uptempo songs!), but the soloist and group do not do much with the song to make it stick.

The track Grows Old is in a category of its own. It is the most recent song to be released and one listeners are not likely to recognize. Even though the track does not fully fit with the notoriety of the other tracks, the song fits the aesthetic of the album well and is a great listen. For listeners that enjoy a rawer a cappella track, this is the track for you. There are no soloists, the production is minimal, and the group gives listeners a traditional choral sound with all of its virtues.

The Opportunes were able to work with some of the top production professionals in a cappella, and that influence makes All Afternoon a smooth listen. The production team hit the goldilocks point in the production of this album: not too much, not too little.

This album has more memorable and less memorable tracks, but you won't regret taking a chance on All Afternoon.

All Afternoon streams on Spotify.