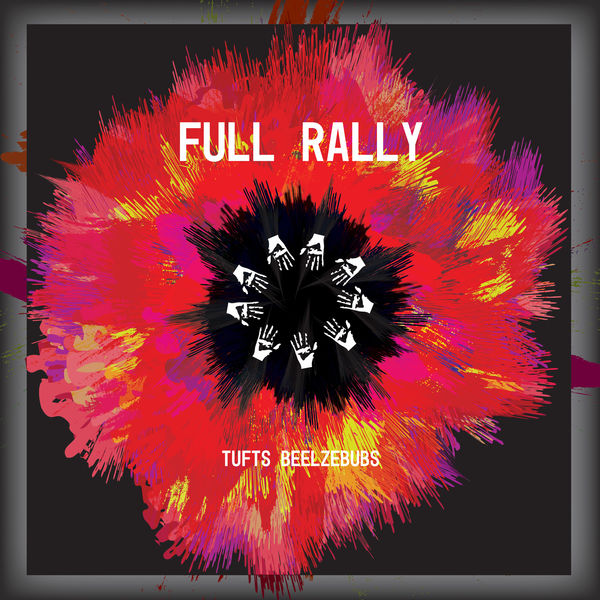 This is an excellent album of too many unexcellent songs. Looks sketchy, to say it baldly like that, but I can't think of any other way to tell you what I made of Full Rally. The Beelzebubs are so talented and they put so much work into their recordings. And I listened to this record over and over again trying to find something I could point to that I liked, instead of just appreciated. I came up with three songs, and one of them is an arrangement that's thirty years old.

G Train is really a lot of fun. I'm a sucker for drones and stomping, and the two soloists do great things trading off the lead. Leonard Fiannaca and Nathaniel Goff each brings his own style, keeping momentum as the tune moves from one to the other to the whole group and back. The song never fails. Maybe if the disc had started off on this note, I would have loved the rest of it more. Instead it kicks off with a couple of forgettable bangers, like the '90s fell asleep on you.

Temple is good, too. It's got some swing to it, anchored by a strong percussion line. Soloist Adam Gotbaum keeps the groove going. In contrast, Should Have Known Better and Liability feature some lovely ballad arranging by Michael Grant and Alexander Koutzoukis, respectively. They are also whiny and hard to listen to, which I blame entirely on the source material. Arranging songs is hard work and folks mostly do it for the love, but it's hard for me to imagine loving these songs anywhere near enough. Take Me Home is a little better, and the second verse harmonies are lovely, but I still don't want to spend a lot of time with this tune.

Danger Zone is at least highly authentic. This was a bland, but catchy song when it came out and it remains so here. I bet it was fun live. But the better '80s flashback is the blast from the past that is Space Oddity / Major Tom (Coming Home).

It is nice to see a new incarnation of Marty Fernandi's classic mashup. A cappella may get louder and more professional all the time, but the fundamentals still delight us. This is a good performance, too — the group handles the texture changes well and the percussion has a great kicky '80s feel that keeps you dancing all the way to the end.

After decades of a cappella trendsetting, the Beelzebubs still got it. What they do with it next remains to be seen.

Other than The King's Singers, I'm not sure there is an a cappella group I've been listening to for a longer period of time than the Tufts Beelzebubs. That reality was thrust to the fore of my consciousness in listening to Full Rally, which features arguably the most famous collegiate a cappella track of the early '90s in Marty Fernandi's ahead-of-its-time take on David Bowie's Space Oddity / Major Tom (Coming Home). Re-recorded here, it makes use of technique and technology that few had dreamed of back in 1991 and it was pretty much destined to get a "5" from me no matter what, given how fond my memories of playing and re-playing this cover are, and the fact that the "Alex"s of Plaid Productions (Koutzoukis & Green), aided by mixing from Ed Boyer and mastering from Bill Hare, only make it that much more awesome. Ditto for Danger Zone which is as cheesy and unabashed as you'd expect in its employment of vocal effects but they all work brilliantly and the finished product has me smiling from ear to ear. By contrast, the note-perfect and great-sounding (but unflinchingly transcriptive) 1:24 teaser that opens the album, in the form of Foo Fighters' T-Shirt, leaves me unmoved.

With that trip down memory lane out of the way, I can tackle what I consider the "meat" of this album, and for the most part, it's a series of answers to the same questions. Namely: 1) are we going to interpret this song or reproduce this song? And 2) if we are going to bring a meaningful interpretive quality to this song, what artistic choices are being made in so doing? Now these may seem like obvious questions and/or they may seem like questions that inform any and every album you listen to that focuses on covering other people's materials. But irrespective of the answers and the success/failure in execution of intention (more on that below), the fact that the Bubs are so palpably asking these questions in their work is laudable and refreshing.

As I've written repeatedly before, the Bubs' legacy and consistency in contemporary a cappella, in particular over the last three decades, is the gold standard, which means we needn't waste much time worrying about the quality of tone and blend and arrangements and energy engineering. It's all reliably first-rate every time they step into the studio. What does that leave us with? As noted above, it often becomes about repertoire choice and interpretation.

Repertoire choice is, of course, a very personal thing. The dynamics of how music is selected for arrangement performances in collegiate groups calls for major decision-making, as inevitably the musical preferences of the group's members in any given year will change. While it perhaps does have some effect on the "Repeat Listenability" score awarded, I feel loathe to criticize too pointedly the group's choices, but for me at least, songs 5, 6, 8, 10 on the album don't necessarily do the group any favors in such close proximity. They all, in some fashion or another, rely on a certain plaintive, raw, emotional, at times hypnotic feel that gets to be a bit overbearing after a while. Individually, the source material is all lovely, and while it's perhaps unexpected to see the Bubs show such a dominant preference for this sort of material, the similarity and relentlessness of the material went from touching and contemplative to a bit overbearing.

As for interpretation, there is some truly exquisite work to be found here and in truth, even when the execution falls maybe a bit short, the results are still very lovely. As you may be able to glean from the individual song scores, the former category includes Dreams, Never Give Up On Me, Should Have Known Better, and Take Me Home; and in the latter, we find Temple, Liability, G Train, and Heavenly Father. What makes the first quartet that much more enjoyable is that they all feature (to varying extents) "addition by addition" — that is, even if they are predominantly transcriptive, they are enhanced by the way vocal solutions are found for instrumental challenges. In Dreams, it's the sort of understated brilliance that I probably take for granted by now from Ed Boyer (here, doubling as arranger) with a full and layered sound that still finds places to breathe, subtle variations and ornamentations between verse 1 to verse 2, and an invented variation on the instrumental section of the original that wisely and successfully shortens the song by a full 1:30 without compromising anything. On Should Have Known Better, it's a full-on expansion on the original that grows more layered and complex and rhythmic than the original and thus offers a fresh take. I'm not even saying I love all of the choices but I love that the choices were made and that they were thoughtful and tasteful. On the flip side, the extra voices in Liability are true to the name of the song, acting as "subtraction by addition" — that is, the close-mic'd, fried vocal lead now sits not just on top of a sparing piano, but atop a much lusher bed of voices that undermines the fundamental self-doubt and frustration of the original. In another case, G Train is nearly all automated/gridded bass and hand claps, plus running eighth notes and block chords, all of which saps the momentum of a song that needs a certain spontaneity and emotion to bolster its blues/gospel swagger. Heavenly Father sounds perfectly delightful, but Bon Iver has such a specific, raw, and soulful sound, and the Bubs here just smooth over all of the idiosyncrasies in sound and tone and arrangement that make him Bon Iver. (For an a cappella version of this tune, I recommend the live version recorded with The Staves on the stage at Sydney Opera House.)

This is an unusually long review — even for loquacious me — but the Bubs somehow always make me want to write more about them. The topline takeaway is "buy this album". It isn't the most revolutionary or impactful or mindblowing or even enjoyable Bubs album you'll ever hear. But it's the Bubs doing terrific work nevertheless, and you'll still be glad you did.

The Bubs are back!

It's been a few years since we've heard a full-length album from the group, and the previous album (2015's In The Book) was very, very good, but seemed to be missing the cutting-edge innovation that we've grown used to from the Bubs. The group has found itself again on Full Rally — surprising song choices, innovative arrangements, emotive deliveries, and cohesive production; it's all here, and it was worth the wait.

There are still a few examples of the bombastic pop/rock songs that have permeated the Bubs' recent releases (Dreams, Danger Zone), and while the group sings those exceptionally well, they aren't the shining moments of Full Rally. The group excels when tackling something new and different. The Bubs' cover of Should Have Known Better is phenomenal; former Bub Michael Grant does an incredible job with the arrangement here, starting with the cold and sparse memories of the narrator's mother, then shifting into a more positive outlook of the future anchored by a bright, vocalized electric keyboard line. It stays true to the intent of the original Sufjan Stevens version but adds warmth through layered vocals, still capturing the feel of Stevens' glitchy electronics.

There are some other standout moments here, too: on Heavenly Father, the group shows that it can still nail a gorgeous crescendo on sustained notes, and it's a definite improvement to turn this into a melodic ballad rather than trying to transcribe Bon Iver's over-electronic original (arranger Joel Reske and soloist Harper Wise both deserve credit for their interpretations here). The delicate Liability, the sassy G Train, and the lush Take Me Home all stand out and keep the middle of this album interesting: too often, songs on a cappella albums blur together, but the Bubs have done a great job of picking songs that each have a unique sound and then tracking them in an order where they can all stand out.

The group ends the album with another bang, reviving an old arrangement of Space Oddity / Major Tom (Coming Home) into a grandiose performance that's impossible to turn off. It's a flawless interpretation of the Bowie classic mashed up with the Peter Schilling single. This has been recorded on Bubs albums in the past (most recently, 2001's Next), but improvements in technology help the 2018 Bubs: the recording sounds huge — and rumor has it that this recording incorporates pieces of the earlier recordings as a nod to the Bubs' history. It's a great way to end Full Rally, which is a return to form for the Bubs, a fantastic album that highlights the group's strengths and reminds us of its ability to innovate and push boundaries.