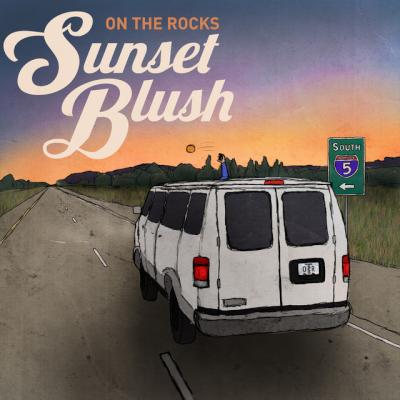 There were a myriad of ways I contemplated approaching my review of On the Rocks' Sunset Blush, but ultimately, it's perhaps most instructive to begin at the end. You want to own the closing track, Tom Anderson's arrangement of the Earth, Wind & Fire classic, September. Period. Full stop. Buy it. Do not pass go. Do not collect $200.

Unfortunately, if we start there, most of the rest of the album suffers a little bit by comparison because the inventiveness and complexity that is on display in September is rarely equaled elsewhere. We do get a taste of it in Love On Top, which has a depth that itself is more interesting than most of the other selections offered here. But whether the approach originates with the arrangers (Anderson alone on nine of the tracks with two further editing credits; Ben Bram arranging two others; and group member Donovan Cassell arranging the remaining track), or with the group's repertoire choices lending themselves to this style (or even the group's talent level being better suited to it), this album heavily favors covers (and even originals) that rely on pristinely sampled and gridded vp. Also, rich thick bass lines that are placed prominently in the lush mix by Ed Boyer and Bill Hare, over which an establishing background block is layered in — generally moving along in homophony — plus the occasional secondary rhythm line to add a bit of texture.

Now this arranging style is a tried and true formula we hear very often from much smaller a cappella ensembles so we know it works quite well on a musical level. On the other hand, with a larger group like On the Rocks with more voices to play with, it's hard not to wish that there was more being done with the voices — especially when we know from both past work by this group and collaborations with many others that Anderson (and Bram) are more than capable of providing it.

How much this may or may not nag at you while listening to Sunset Blush is really impossible for me to judge on your behalf.  Furthermore, your assessment may be complicated by the terrific production work provided by the aforementioned Boyer and Hare, working in tandem with Danny Ozment (who recorded and edited the bulk of the album) and Russell Kamp (who handled two tracks), who ensure that everything sounds fantastic no matter how simple or complex it may be. It's hard to complain too much when things sound this good. What's more, even in the simpler and/or more straightforward moments, the arrangers always give us rich, dense chords — and some playful/crunchy reharmonizations — so where the rhythmic complexity may be lacking at times, and the texture of a given arrangement may be a little thin, the density of the harmonic work rarely is.

Since it was a bit of an issue on the group's last release — has it really been five years?!? — it's worth noting that OTR definitely restores its swagger with this album. There's a confidence and an energy to the singing that is palpable, and the solos are uniformly excellent and occasionally superior (see the Ethan Alvarez trifecta of Señorita, (1/2 of) That Pusher Love Girl, and Gorilla). If there's any issue at all to be taken with the swagger level, it's that it may come at the expense of more nuanced dynamics. The group does do well to tone things down a bit in the country music section (Colder Weather, Embers, Coming Home (Oregon)), but there are opportunities missed for some effective dynamic variation in some of the other material (which is rendered pretty much "full tilt" from beginning to end). It's also worth noting — and lauding the group — that Sunset Blush features three original songs, of which the Bublé-esque Royal Crown is my personal favorite by a wide margin.

Returning, then, to my opening sentiment, you need to own September and in an iTunes world, you can in fact own only that track and call it a day. But unless even your casual a cappella enjoying — in the car, at the gym, etc — is done with a heavily critical ear, you'd be well-served to pick up the whole album. Does it break new ground? No. Is it as good as some of what this group has given us in years past? No. But (slight) underachievement by a given group and/or this or that arranger is not what we judge here at RARB. As recorded a cappella goes, it's a terrific listen, full of infectious energy, appealing repertoire, and great-sounding music. You could do a lot worse.

On the Rocks is cooking with gas on this one. Wow, what an incredible release from the guys in the Pacific Northwest. Sunset Blush is almost everything that you could want in a collegiate album. It is full of cheeky fun, engaging soloists and unobtrusive arrangements. Get it if you want some silky-smooth singing just suitable for a late Sunday evening sitting out on the veranda and making grandma's heart flutter.

Now, thematically, the album is a bit disjointed. The first third of Sunset Blush has this sexy swagger that's a bit amusing upon first listen. I don't think the guys should have opened the album with two Timberlake tracks because of the similar style and subject matter. Gorilla is just all-out bump and grind music — the last words you hear on the track is the repeated phrase "baby making" from the chorus. Subtle it ain't and it's just not what I'm used to hearing from these guys, but they perform the song extremely well here. And original context aside, Feeling Good makes you feel just that.

After this, you get eight tracks that are completely in the OTR wheelhouse. We're given a little alt-country, a singer showcase, and some folk-pop. Songs expected from these clean-cut crazies. They perform these with equal parts super success and ho-hum simplicity.

The singing is really what carries this album. And I mean that seriously. Many of the soloists are at the top of their game and the backs are lush and comfy, really evoking the comfort aura. Jazz influence and R&B stylings permeate many of tracks. There are some nice crunchy chords sprinkled throughout. The group scat backgrounds on Feeling Good are lined-up perfectly; whether this is from the innate talent or studio magic doesn't matter because none of it sounds artificial. In fact, Sunset Blush is another release in line with the natural sounding albums ("dim"s, "bop"s, "ba doo"s, "ah"s and all) that have been released in the past year.

And all praises to the fact that OTR includes not one, not two, but three (!) original songs again. Jasper Freedom gives us two deliciously wonderful compositions. The title You Lift Me Up initially made me think it was a Josh Groban cover (admit it, you had to go and think about it for a second), but the song is just ripe for background music for the next YouTube wedding proposal. I'm a Tears for Fears fan, and the inclusion of motifs from Everybody Wants to Rule the World in Royal Crown makes a pretty fantastic song even greater. I think it's my favorite track on the album.

Some of the best scholastic originals have come from this group (Afloat, Lighthouse, When My Baby Walks, and Scrum just to name a few), and these latest are strong additions in what I hope will become an even longer list. And eventually an album (hint, hint).

There are a few tracks where the nakedness of the production or the simplicity of the arrangement makes the whole thing come across as a little blah. And unfortunately, that's the last quarter of the album beginning with Colder Weather. Embers is outstanding (and ties Royal Crown as my favorite) with a nice earnest quality and emotional solo performance by drummer, soloist and composer Clay Attig. What a triple threat. It just has the distinct disadvantage of being saddled between the aforementioned song and Coming Home (Oregon), so its overall effect is severely limited. I'm late with my review, so it's now September and Sunset Blush closes with the group's take on the Earth, Wind & Fire classic by the same name. Oh no. It's just not good and doesn't sound anything like the singers from the first half of the album. A bit puzzling.

These three tracks are not overly detrimental to your enjoyment of the album. Honestly, the other nine tracks are pretty much a gift to your ears. Okay, so eight because I suggest only picking one of the JT tracks. Let's hope that the sun never sets on the great music coming from On the Rocks.

RARB hasn't heard from Oregon's On the Rocks since the group's 2013 album Alder Alley, but some things haven't changed: these guys are still outsourcing their arrangements (nine out of twelve) to Tom Anderson, and that partnership still suits these singers' slick, bright pop tone.

A bright moment on Sunset Blush is the group's return to original music — two songs here were penned by OTR's Jasper Freedom. You Lift Me Up is not quite as glossy and uptempo as the rest of the album, but it makes for a lovely ballad midway through. Freedom really shines on his Royal Crown, which is bouncy and breezy and jazzy and an all-around polished performance — it's a song that fits right alongside the rest of OTR's pop repertoire. Later on the album, Clay Attig's original tune Embers is a gorgeously warm, twangy track that fits seamlessly between songs by Zac Brown Band and Mat Kearney.

Sunset Blush loses a little bit of focus in its second half. The addition of Divisi on the track Like I'm Gonna Lose You is particularly incongruous. This collaboration song is beautifully-performed, and both OTR and Divisi meld beautifully together — it's fun to hear these two become a big coed supergroup for a track. But it's a startling deviation from OTR's regular sound, and this would've been better-suited to a one-off single or a final bonus track rather than a regular one on an OTR album.

Overall, Sunset Blush is a solid addition to OTR's discography. Nothing here will grab as much attention as the group's viral cover of Bad Romance, but that shouldn't necessarily be a goal: there are beautifully-arranged and performed pop/country songs here and three original songs that stand up next to these covers. Some songwriter credits would be nice (since Feeling Good was in fact once performed by Nina Simone but not originally/OBP), though overall Sunset Blush is a nice way to check in on what OTR has been up to over the last five years, as well as being a great reminder of the talent inside this group.