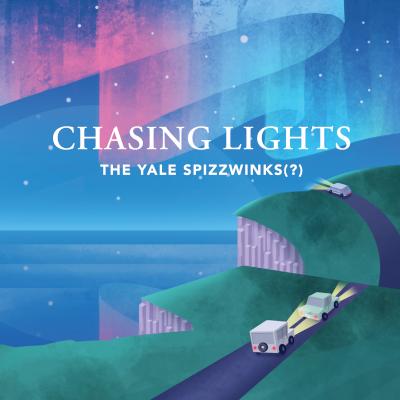 If you want an easy four-minute-ish snapshot of what I enjoy most about what the Yale Spizzwinks(?) can do, and what they do about as well as any collegiate group I've heard in recent years (granted, there aren't that many still doing this sort of thing at the moment), it's their cover of John Lennon and Yoko Ono's Imagine, arranged by former musical director Scott Feiner who graduated earlier this year.

This is the sort of special, rare moment that was featured on the group's last release, Hometown — a wonderful melding of what-might-otherwise-have-been a trite, cheesy song perfomed in the extremely traditional male choral/Glee Club style, instead re-imagined via a nuanced arrangement, featuring all sorts of unexpected colors and shadings. Heck, there are even a few moments and choices I don't love (the "live in peace" section towards the end), but the thoughtfulness in the arranging and the care in the performance — dynamics, phrasing, matched vowels, etc — comes shining through. For my money, this song is the Spizzwinks(?) at their best. (Honorable mention goes to Good Thing Going, also arranged by Feiner, which closes the album.)

Fortunately for the 'winks, Feiner seems to have a harmonic heir apparent in Jake Gluckman, who contributes two more of this release's best offerings: the opening For Once in My Life and Pure Imagination. These selections too feature crunchy chordal goodness, though in the case of the former, I wished for a little more development/complexity in the arrangement during the second and third times through, and a soloist who wasn't quite so pinched on the top end. (Gluckman's third contribution is an unfortunate misstep — a far-too-fussy and heavy-handed Perfect.)

Indeed, solos for a group that feeds into the Whiffenpoofs — and thus tends to consistently be comprised of those who sound like more formally-trained, in some cases theatrical singers — can be an issue not only on a Stevie Wonder cover, but also on other, more contemporary pop material from folks like Andy Grammer, Olly Murs, Gavin DeGraw, and Ed Sheeran. There is an ease and a freedom, at times an honesty and a rawness, to the original material that is frequently glossed over here or absent entirely, replaced by overarticulated consonants, excess vibrato, and a sometimes-nasal upper register. These songs don't suffer schmaltz well, and the group's affection for wordy musical intros — just start the dang song and don't feel the need to "introduce" it — as well as an apparent uncertainty or insecurity with what to do with instrumental bridges/interludes (or rap, in the case of Troublemaker) doesn't help either.

For me, the thing about the Spizzwinks(?) is that even with the disappointments, I will always still look forward to listening to their next album. Maybe it's the former all-male Glee Club singer in me who understands the desire to branch out and sing more current reperoire. Maybe it's the vocal jazz aficionado who loves a nifty "re-harm" as much, or probably more so, than the next person. But these guys stake out territory that isn't as popular or (perhaps perceived as) "cool" as much of the rest of the current collegiate a cappella community, and even if it's only one or two songs — like Imagine — on an album that I may not revisit in its entirety, it's well worth it.

The Spizzwinks(?) remain a group that's easy to get behind, managing to offer another cleanly produced release in Chasing Lights with the apparent goal of reaching all ages and all audiences. Not easy to do, and done with endearing joy here.

I wrote the following summary for the group's prior release, Hometown: "If you've always liked the Spizzwinks(?) — if you like a balance of old-timey songs and today's hits without a lot of fuss — the group's story continues with Hometown." No surprise after a 100 years of singing a cappella together, but the Spizzwinks(?) remain consist to their mission of spanning the decades to bring younger fans back in time, and introduce older fans to modern offerings, delighting audiences with their gentle mannerisms and audible happiness. New for Chasing Lights, a bit clearer fusion of the two approaches, heard immediately through the modern percussion stylings in the classic For Once in My Life. 1968 just shook hands with 2019, and oh, what a delightful meeting.

If there's anything that the Spizzwinks(?) really excel at, it's the "less is more" approach to simple songs. Why muck up a good thing with clutter, and to that note, enjoy the refreshing spin on Let Me Down Easy. What a wonderfully pleasant track — comforting in its delivery, with a final stage bow heard through the high harmony energy as the piece snaps its way to the end. It's like Wagon Wheel sung by the Rat Pack. It's classic Spizzwinks(?) and I'm here for it.

We then enter a period of "fine, but not very memorable" song selections and arrangements. Yet I still appreciate that steady Spizzwinks(?) sound; not too fancy, just good singing — good vocal technique, good phrasing, good ensemble work. Nothing wrong with that. I do think the aggressively accented section of Keep Your Head Up is not in keeping with the group's best sound or the spirit of the song, but having a song slip into redundancy is not good, either.

Then we hit the mid-album take-notice piece. I have never heard an arrangement of Imagine as daring and unexpected as what the Spizzwinks(?) have imagined themselves. This is a dark (quite dark) jazz interpretation with a strong swingy beat and captivating lead who beckons us to follow him. The unique vision, the key changes, the sliding tempos, the rhythmic patterns — for a group who relishes in easy-going charm, this challenging risk really pays off.

From here, it's less noteworthy but still enjoyable music. Though, I'm a little uneasy about hearing Come What May from one lead and not a duet. Pluses in the back half of Chasing Lights include the highlighted quick waltz feel of Perfect, the retro charm and sophistication on display in The Way You Look Tonight, and the perfect final chord to close out Chasing Lights.

I think a lot of this album will make you feel sentimental, from the material selected to the crooning deliveries, the minimal production, and even another graphically delightful album cover. Chasing Lights may not offer the latest and greatest in songwriting or studio enhancements, but it's got a lot of wholesome heart you can't easily find elsewhere.

When we last heard from the Spizzwinks(?), I applauded these singers for starting to embrace the modern contemporary a cappella style while still remaining true to themselves. Songs were simple but fun. This simplicity was a sticking point for me in my review, challenging the group to explore pushing its comfort zone on things such as chord color and more intricate backgrounds. This album keeps much of that tradition alive — not cutting edge, but it's fun to listen to and easy to digest. However, while Chasing Lights overall is a step in the right direction in terms of exploring new ideas, the group sounds rigid and unwilling to let the music deliver the full impact possible.

The biggest flaw on this album is that everything feels restrained. Consider the track Pure Imagination. Arranger Jake Gluckman penned an arrangement filled with colorful chords all over the place. However, for all the great chords that are put in the song, the track feels rushed. For example, the number opens with three glorious chords on the lyrics "hold your breath, make a wish, come with me" before the soloist enters. However, after each chord, the setup for the next chord comes hurrying in and the soloist rushes before the third chord is complete. Something as simple as taking an extra beat or two between each chord and the setup for the next chord would add an extra level of depth to the performance. The soloist could enter during the silence and add vulnerability to his statement. This track is talking about the beauty of imagination and dreams. However, without adding an air of wistfulness or passion, it feels more like a lecture than an empowering speech.

As a counter, take a look at Come What May. From the opening statements, I fell in love with Dylan Schifrin's arrangement. This piece is colorful and captures the emotions perfectly. The biggest challenge with this arrangement is that the original song is a duet between male and female leads. This arrangement lets the soloist (also Schifrin) deliver the entire story as one person. A creative additional key change lets the soloist change their side of the story without suddenly jumping to a different vocal register. It's a continuous thought, and it is executed brilliantly.

Finally, something happens on the final two tracks of this album. There are no indications on the track liner notes, but these two tracks sound live. It might not be in a concert setting, but I wouldn't be surprised to learn these final two tracks were recorded by the whole group in the same room at the same time. The energy of these tracks is different and the tuning is better. The easiest explanation is that the group is all in the same place and listening to each other and reacting accordingly. The energy the singers are giving off is because they are working together. These two tracks are exactly what I've been wanting from the group. The arrangements might have the same simplicity issues I complained about on the previous album, but this is the energy the rest of the album is lacking.

Hearing the last two tracks for the energy, and the rest of the album for the group's willingness to push the envelope and grow as musicians gives me so much hope for giving the 'Winks a "5" rating in the near future. The group has proven that it can deliver all of the elements that make the Spizzwinks(?) an amazing group to listen to. All these musicians have to do now is put all the pieces together.