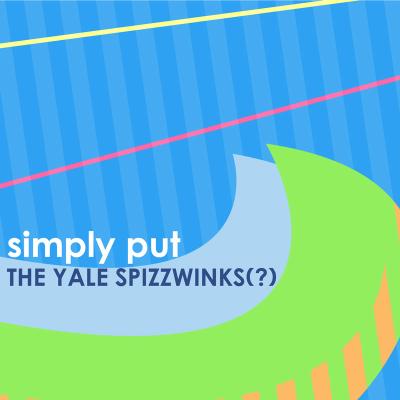 I've started writing this review at least a dozen times, stopped, and started over again because I just do not know where to begin to review a subpar album that I still managed to enjoy a great deal.

Truth is, about four songs into this album, I wondered if the Whiffenpoofs had fallen off a bit over the years and changed their name to The Spizzwinks(?). Sure enough, a bit of research on their website tells me that The Spizzwinks(?) are something of a "farm system" for musical underclassmen, many of whom go on to sing with the all-senior Whiffenpoofs.

Certainly this is quite a compliment to the talents of those lucky enough to be accepted into The Spizzwinks(?), but in recorded form, their music just doesn't make for a terribly exciting aural experience.

Lest one think that I have a bias against the Glee Club/old-fashioned male choir sound that probably had its heyday 75-100 years ago, know that I am a proud alumnus of the University of Pennsylvania Glee Club, one of the oldest such ensembles in the country (second only to Harvard and Michigan I think) and spent many of my college years singing much of the same repertoire that these Yalies cover.

And indeed, when these guys tackle the old warhorses — Shenandoah, Loch Lomond, Over Jordan — they shine quite brightly. But over the years, groups like The Spizzwinks(?) (and the Penn Glee Club) have found it difficult to sustain audience interest purely with ancient standards, and indeed such materials gets to be a bit boring for the members, too.

The danger of moving to a broader, more hip cross-section of music, of course, is that groups like these tend to recruit "trained" singers, with lovely, rounded tones that perhaps aren't always well-suited to top 40 selections. They also tend to sing arrangements that are more choral in nature and rely more on technical precision than the "feel" and "groove" that is necessary to pull off pop and rock hits.

Both of these problems undercut The Spizzwinks' Simply Put in major ways as they attempt, but fail, to bridge the gap from Lerner & Loewe and Bernstein to Maroon 5 and Counting Crows. "Vanilla" and "square" were the two words that came to mind most often, with some of the arrangements being so stereotypically "show-choir-y" that I couldn't help but chuckle. Ditto for many of the soloists who might have gone far in a "Les Miserables" audition but who come off as too-shmaltzy-for-words, even on a song that's already as dripped in cheese as If Ever I Would Leave You.

Sure, there's nostalgia galore to be found here — certainly for the group's 91 years worth of alumni (especially as more than one-third of the album has been recorded previously by the group so clearly everyone knows a decent amount of the material), and even for members and alums of other similar groups (like me!). But in all honesty, I rarely if ever go back and listen to my old PGC albums. The songs and arrangements are those that are better enjoyed when I'm on campus and can sing them with my old pals. So I won't likely revisit this album anytime soon — but it did put a twinkle in my eye and make me want to burst out in a chorus of "Brothers, Sing On!" :-)

I guess I expected a little more from a group that's over 90 years old and has an actual alumni association. Guess this teaches me that age doesn't exactly equal excellence. Inconsistent soloists and a dichotomy of highs and lows and nothing in between leave me wanting a whole lot more from the Yale Spizzwinks(?).

Wanting, for example, a diversity of repertoire. Simply Put seems to draw its music primarily from two eras: golden age and vocal standards (No Regrets, Loch Lomond, and Somewhere) and modern pop (She Will Be Loved and Accidentally in Love) with a little bit of Queen thrown in for good measure. It's not necessarily a bad album, but the arrangements and choral performance styles lend themselves much better to the oldies than the newer pieces, which sadly, are somewhat laughable. My favorite track by far was The Way You Look Tonight, a decent solo effort by Andrew Banooni and tastefully arranged with a fun walking bass line by alumnus David Flugman (with whom I attended high school).

Along these lines, the single-track method of recording is more appropriate to the choral style as well. In She Will Be Loved, the soloist, who seems to have little control of his voice, overcrowds the sound of the delicately textured background. That song also speeds up considerably over the course of its four minutes. To contrast, If Ever I Would Leave You offers a lush, full baritone lead by Brock Forsblom and allows the backup to come through to accentuate the words. A few songs later, the lead on Build Me Up Buttercup also finds himself all over the music staff, especially on the high notes, notwithstanding the opening "why" in the first few words of the song.

One stand-out on the album is soloist J.P. Hartmann, particularly on Somebody to Love, who brings an evenness and more modern edge to this otherwise older-sounding album.

A few of the tracks were recorded live, which doesn't necessarily pose a problem with this glee club performance style (think no percussion besides snaps and claps). However, there are a few extraneous background sounds in the middle of Somewhere that distracted me. They are also barely audible, but there, in The Nearness of You.

I don't take my a cappella recommendations lightly. While I can't say that I'd offer Simply Put to collegiate folks, it is a decent submission, one that might enjoy popularity with older listeners.

A cappella albums don't get much more simple than the Yale Spizzwinks(?) Simply Put.

At it since 1914, the Spizzwinks(?) have found a formula that works for them, and they stick to it. In an age of recording technology where "poor" collegiate a cappella groups are spending tens of thousands of dollars on albums with all the bells and whistles, these Yale men go the opposite direction and produce great results. That's right, there are few tricky effects and gimmicks on Simply Put, and it doesn't need them. Frankly, that wizardry couldn't add much to this album — it would actually detract from the beautiful sound the Spizzwinks(?) create on this album.

This is traditional, old-school a cappella at its best. The Spizzwinks(?) have a nearly spotless blend that creates a beautiful sound. While listening to Simply Put you can actually visualize the tuxedo-clad, Ivy-league men on stage singing in unison. If there is any question to these boys' talent out of the studio, all doubts are obliterated on the live version of Somewhere, which showcases excellent harmonies, a powerful bass line and an overall impressive sound.

As for the soloists, the Spizzwinks(?) have some of the best at Yale. David McIntosh performs one of the best bass solos I've ever heard (Sixteen Tons). Yes, he even sounds better than Rockapella's former sonic boom, Barry Carl, on the same song. J.P. Hartmann has a moment, actually twelve seconds, on Somebody to Love where his high, held-out "love" note is simply soul-massaging.

Criticisms? Only two: 1) Simply Put could do without some of the traditional old-school a cappella songs (Over Jordan, The Nearness of You, etc.) that drag out this full 16-track album (12-14 songs would have been ideal). 2) The Spizzwinks(?) should have included the original artists on the track list so the listeners know what they are listening to.

But this is nit-picking. Simply put, the Spizzwinks(?) are just simply good.