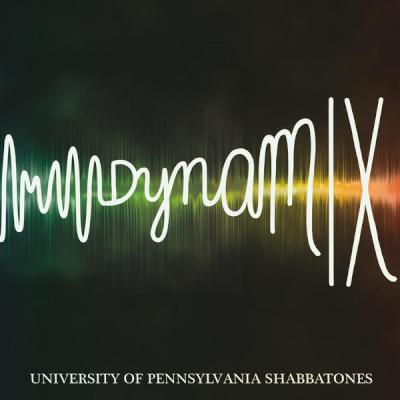 The UPenn Shabbatones latest album, DynamIX, isn't the flashiest or the most groundbreaking album that you will hear this year. It is an album that the group should be proud of, and can listen to for years to come as a reminder of the fun times that members had as part of this group. And yet, as I listen to the album and look at my fellow reviewers' opinions on the group's previous releases, it's evident that some of the issues raised before are still problems on DynamIX.

Take the criticism of a lack of emotion and dynamic change. In his review of the Shabbatones's previous album, One In a Minyan, Kyle Yampiro noted that "phrases drone on without dynamic contrast, and if there is a volume shift, it is apparent that this work was done in the editing process rather than tracking". This is still an issue on the current release, moreso on the Hebrew pieces than the English (although, the English pieces aren't immune to this issue). Take Kol Paamonim as an example. There is a slight volume increase in the chorus, particularly in the midrange background vocals, but the track sits at a mezzo-forte for pretty much the rest of the time. The bass line is on a repetitive "dm dm dm" quarter note pattern for nearly the whole song, which sounds more like a metronome than an actual bass line as the part doesn't really go anywhere. There's no energy behind many of the background vocals, actually. It sounds like the group is going through the motions, reading the notes off the page. Yes, it is in tune and there are no glaring note issues, but the lack of emotion from the background vocals doesn't give the listener reason to be invested emotionally, either.

And that's despite the effort that is being put in by the soloist, Michael Montague, who I think delivers a beautifully sung and tender vocal on the track. It's a group effort that makes a track work — you could have the most beautiful solo in the world, but if the background is not there displaying that same emotion and energy that the soloist is providing, the whole track falls flat. And when the piece is in a language that most listeners may not be familiar with, it's even more important to make sure that everyone is on the same page emotionally, so that the story is conveyed in the best way possible.

Moving to the positives, none of the arrangements sounds chaotic, which was a criticism of the last album. All voice parts fit together pretty well throughout, although there are some moments where I think the bass line is a little too strong in a verse. I also need to give a shoutout to Shoshana Segal, who is a bright spot on the solo for the strong opener Af Echad, which is a very wordy solo, particularly in the chorus. She is also part of the beautiful duet on Ed Sheeran's I See Fire with Michael Shechter, which is one of the highlights on the album. The background vocals on this track are a great complement to the solos, which then begs the question: as the group clearly has the musical talent to showcase, why didn't they do so on all of the tracks?

On the next release, I really want to hear the Shabbatones make the next step — I want a whole album that shows off the musicality that these singers demonstrate on I See Fire. As for this release, it may be a little while before I give DynamIX another listen.

As a personal rule when reviewing albums that feature a language I don't know, I never look at the lyrics or the translations of the song until after finishing the review (unless I'm discussing a specific song). The idea is that musical ideas and emotions are language-independent. As I listen to DynamIX, I constantly find myself reaching for translations, and not to discuss songs; I am struggling to connect with many of these songs. While a lot of the basic foundations are correct in this album, DynamIX is lacking many of the elements that keep everything interesting for the listener.

Let's start with the first two tracks on the album, Af Echad and Lev Chofshi. The former starts with many of the ear markings of a solid opener. However, by the time the first chorus finally arrives, I'm bored. The group is operating in a range between mezzo- piano and mezzo-forte — the difference between the two is existent, but subtle. The difference in energy between the two, on the other hand, is virtually non-existent. It feels like the same energy at all times, but just on a different vowel sound. The chords follow the same pattern at virtually all times and refuse to deviate, sacrificing the use of color tones with no reward. The second track enters with the same energy and blocky chord structure, so I at first assumed I was listening to a continuation of the same track. When I looked up the lyrics, I was shocked to learn the lyrics paint two very different emotions.

This lack of energy is language independent, as shown in the track Brother, which I feel is one of the weakest tracks on DynamIX. The largest challenge for a piece like this is the lack of variation in the original. The group leverages the use of changing vocal percussion patterns to create distinction between the sections. This method only works for so long, as the percussion becomes too complicated during the bridge and loses the feeling of a steady pulse. By putting little differences between the verse, be it rhythmic patterns, harmonies, or style, it gives the group more avenues to keep the listener's interest.

Despite the flaws, there is still a diamond in the rough for much of DynamIX. There are no rampant tuning errors and the soloists are very solid throughout the album. However, the soloist is merely a focal point for the group; if the background is unable to match the soloist, the lead will be left high and dry trying to pull the group along. This group has all the tools to be successful. However, until these performers learn how to use the tools they have to their advantage, the group may find itself stuck in musical limbo.

DynamIX is a showcase of consistently strong voices singing well while doing nothing more. It is a series of songs that run through the motions but doesn't invest in the realization of musical potential.

There's a major disparity between what the Shabbatones should clearly be able to do, and what they're not doing. In the entirety of DynamIX, I couldn't pick out a single weak voice, a single misfitting soloist, or a single ensemble member creating noise in the blend of a song. Everything on this album is sung, recorded, and mixed with a super smooth sound that is never harsh nor overly effortful. As a reviewer, I can't really ask for more from a collegiate a cappella group in the core sound department.

While that implies an exceptionally strong foundation for an a cappella group, this is mostly where the praises stop. Unfortunately, DynamIX does not live up to its name — it lacks almost any sort of dynamic nature. From the outset of Af Echad, background voices lack passion in both their parts and execution of said parts. Moments of musical anticipation lead into no sense of release or climax. It's still a solid song, but it strikes as incredibly safe, despite some very obvious and apparent potential in the source material.

Every song on the album has a self-imposed ceiling that manifests itself in different ways. It's musical brilliance so in reach — that's never truly reached for. Sometimes, as in the case of Lev Chofshi, it's major omissions from the original song's core harmonies where most of the emotional impact of the song rests without a suitable replacement. This results in a case where the listener gets distracted by not feeling anything where they're expecting to. Sometimes, as in the case of Beneath Your Beautiful, strong starts of songs with great soloist synergy will be undermined by a lack of interesting change or growth as the song progresses.

There are some songs where musical moments with tons of potential come rapid-fire but are glossed over every time. Halom Shel Kol Gever, for example, highlights two vocal features and even a rap, and yet all three very strong individual parts seem to enter and exit while hardly acknowledging the others' existence. The background parts stay almost identical in dynamics and texture during all three leads, which creates homogeneity there when there should be stark senses of contrast to exploit.

Occasionally, the Shabbatones almost seem undecided on which voices to highlight or lend a spotlight. Esah Einai is possibly the strongest song on the album because it relies on a significant portion of the ensemble to sing as soloists for extended periods of time. This is when the singers are at their most daring and engaged, and there are some great moments of ebb and flow in this track. Unfortunately, the melody is often left unaccented, which means the listener loses a sense of continuity and a single line to follow at any one point. In just about any song, obscuring the melody is a major missed opportunity.

Finally, mashups are handled in very confusing ways by introducing new parts at what seems like random times. Love Me Now introduces sections from Another Day of Sun from the film La La Land, but the latter song is given no moment of independence, nor does the lyrical content actually match up. Kacha Anashim injects both a duet and lyrical interplay with Zac Brown Band's Day That I Die, but the duet isn't given an opportunity to stand on its own before being introduced; it gets introduced before the latter is able to have a verse to itself, and its chorus is actually layered over the former's verse in a way that creates a confusing sense of song structure. There is no one right way to execute an a cappella mashup, but it should never leave the listener confused as to what part of the song's structure the group is currently singing, or why the mashup is even there in the first place.

The common unifying factor beneath all of these critiques is a lack of intention. Music must always be performed with intention because expression is paramount to any performance art. The Shabbatones have so many obviously strong and skilled singers, and their song choices are ripe with opportunities for said expression. By simply running through the motions, DynamIX is unfortunately an album with a solid sound but full of missed opportunities.