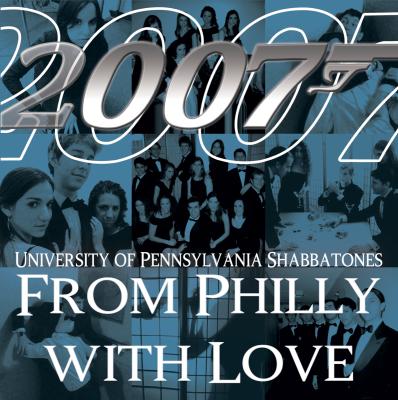 UPenn Shabbatones' From Philly With Love left me, if not cold, then no better than lukewarm. Solid, clean production and interesting source material start the group in the right direction, but something just feels a little off. It's as if the group is always uncomfortably self-aware, as if this is all just a little show they decided to do for us that even they don't take it that seriously. The Shabbatones give us Hebrew and English. They give us a pop sound. They give us top-notch consistency. The end result remains unconvincing.

Oddly, the Shabbatones conjure images of a high-end high school group. Right on the beat, but not in the pocket. Full of charisma, but not in character. In tune, but thin voiced. It's hard not to like these guys, but that doesn't translate to repeat listenability for this mixed collegiate ensemble.

Musically, the Shabbatones can focus their work on dynamics and arranging, really feeling the rhythm, and better matching of soloists to the demands of their songs. But more importantly, the Shabbatones need to get at the music they can perform authentically. Does that mean they need to change their repertoire? Perhaps, but not necessarily. They could immerse themselves in the music and culture that they now just cover. They could become what they imitate.

If that sounds like too high a bar for a collegiate group, consider that RARB reviewers are charged to make this very comparison. It's like singing Born in the U.S.A. and then getting slammed for not being as good as the "boss". It's a tough standard to meet.

The Shabbatones are to be commended for the path they've started down, but commitment to a world music sound needs to start way before the recording session. With source material this interesting, a fully committed Shabbatones is sure to make waves where From Philly With Love merely floats.

My exposure to Yiddish, Hebrew, and Israeli music is limited to pretty much Six13 and Ivri Lider, but suffice it to say that The Shabbatones from the University of Pennsylvania are excellent additions to the group of artists making that kind of music. The group's third recording From Philly With Love is a good recording of some highly infectious music delivered with pure emotion and a bit of pizzazz. If you are the adventurous sort, check them out.

What the record has going for it are performers with amazing emotional attachment to most of the songs, especially in the non-English tracks that easily translate to the listener. As with most co-ed collegiate a cappella groups the ladies are much more accomplished singers than the men. They have a quality of tone and a maturity of timing that brings their talent to the forefront. Rachel Fried and Rebecca Braunstein are simply amazing. You can truly feel their presence on each of their tracks.

Some of the standout tracks are Ani Shelach, Milim Yafot Me'eleh and Habibi. Fried makes the most of a simple melody in Ani Shelach and colors it with a melancholia that gently tugs at the heartstring without being overly pathetic or sappy. Braunstein brings it during the opening track Milim Yafot Me'eleh. She rides the pulsing beat of the pop tune with a mastery of delivery. Her energetic performance just leaps right out at you. Zeke Faham's performance on Habibi commands you to take this slight dance number and bust it like you're about to beat the high score on Dance Dance Revolution.

The arrangements are a little lacking for my tastes and feature a lot of block chords or "doot doot" rhythmic patterns that would make the album truly boring if all of the songs were sung in English. Over My Head and Unwritten are just flat out dull. Braunstein again saves a track by being pretty remarkable on Everything U R. Granted, the song itself sucks, but Braunstein does a great job infusing a bit of excitement into it.

There are some major tuning issues throughout. Some of that is attributable to the nasal focus of the group's intonation. It seems to be a preferred style of singing for this type of music, yet it also seems really difficult to tune with any regularity. And the tenors seem to be mixed the lowest in the block, so the balance is off. You can hear this nice, warm, thumping bass and then a few muddled voices in the lower middle and then wham you get hit with some power sopranos and altos.

Check out these guys and girls when you want a taste of niche a cappella. In a pipe dream of mine, they would forgo singing any more songs in English and concentrate on more of their foreign repertoire.

The latest album from the UPenn Shabbatones suffers from what I'll call lack of emotional energy. Singing is fine and arrangements are average, but what's missing is a sense of warmth and a contrast in feeling between songs. The vocals, both lead and background, sound phoned in; like someone said to the group, "Okay, stand in front of this mic and sing your part." and then used the first take while each person was still getting their bearings. Production is very solid and functional, but unfortunately that alone isn't interesting enough to elevate this album above average.

Especially considering that the majority of this album is in Hebrew, I was looking for something beyond language to give me a sense of what each song was about. Instead, everything sounds at about the same level of intensity and dynamic. Sometimes this works, as in the case of more upbeat songs like the opener Milim Yafot Me'eleh, which starts the album off strong. The bar set by said track is never raised, unfortunately, and not much new is introduced to divert the feel away from "upbeat power pop".

I have to say, even though they're not particularly varied, I sensed a bit more commitment and energy from the group during the Hebrew numbers than during the few English ones. Credit that mostly to soloists who handle the Hebrew text with more graceful phrasing than do their group mates singing in English. Also, from a listener's standpoint, the fact that I've never heard most of the Hebrew pieces before, whereas I've heard Unwritten enough to last me the rest of my life, added some additional interest where the group was giving me little.

Next time around I hope that the Shabbatones can amp up their energy a great deal. I would also suggest that they consider trying out a wider palette of sounds in their arrangements. This idea is flirted with in the backgrounds of Emtza Halaila Bak'far to good effect. Translate some of those less conventional sounds into the English repertoire and the 'tones might be on to something much more groundbreaking than what they've released here.