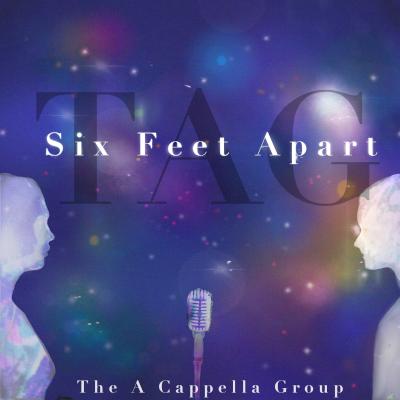 As the album name implies, Six Feet Apart was recorded in 2020. You'll recall that schools abruptly shifted to distance learning, so in-person group rehearsals obviously stopped. Several months later, three at a time, members of TAG pulled this out of their bag of tricks, giving the release a last listen in August during group Zooms before mastering. You'd just never know.

More brings such an electric, joyful noise. By Break My Heart, I'm realizing that the production is so crisp and state of the art, Anderson's arrangements are so complementary to the current voices, and the leads are so High School Grammy, that this group has now lined up with OneVoice. I've been impatiently waiting to see if this moment would happen. And we haven't even reached the originals yet.

The first one's next. Isabella Sbarra Michelland was heralded on TAG's previous release for her composition skills and voice from the heavens: she's deepend her craft even further with Driving. My first note for this track: "Is she back?!" And Michelland's lyrics are brilliant, too: "Who will listen to a little garden snake?" My only head tilt: the engine sample intro, because on streaming platforms, it sounds a lot like a car ad.

The other original is just as divine, Republic Pennsylvania by Mady Ladd, with an arrangement offered by fellow group member Prabh Saini. Successful student partnerships are particularly exciting; that means the next generation of a cappella greats is already here!

Vocal percussionists get less praise these days in our copy and paste, "popdrum.exe" world, but mad spitter Wedler Lordeus is drummer of note. His beats grace every track — an impressive commitment to his craft — but just sit back and enjoy his show for Farsighted. He's pounding some wicked, wild drums.

Speaking of pounding and processed, Hazy Shade of Winter is the odd facemask of this pandemic release. TAG completely captures the spirit of the original and sings with intention and drive, but anywhere you slide this song into the tracklist, it sticks out too much. And, if I may be so bold to ask, why three Lawrence songs? That's a whole EP from one artist.

Still, I absolutely love what I'm hearing from the annual TAG carousel ride. Overcoming unreal odds and producing music that is nearly in its own category of excellence? Get it while it's hot, friends.

If you couldn't tell from the title Six Feet Apart, this album from The A Cappella Group was affected by the pandemic: the group couldn't rehearse together after March 2020, and this recording was done following COVID protocols over the summer to capture the voices of the group's seniors (over half the SY19-20 group's roster).

Listeners won't actually be able to tell that anything was different for TAG: this album still features the group's bright voices, pop-heavy repertoire, and high-energy performances. There are glimmers of the group's frustration with the pandemic — the title track feels especially heavy and emotive, and the lilting intro to The Weather carries a sweet melancholy that soloist Madison Owens carries beautifully; the sassy gospel ending is an attention-grabbing way to end the song and album. But overall, the group's bright outlook and uptempo songs are on display here, from Break My Heart to Farsighted.

One thing we've come to expect from TAG is original music, and the group doesn't disappoint here: Isabella Sbarra Michelland's Driving fits so well in this track list that I had to check the album liner notes multiple times just to make sure it wasn't a cover I just didn't recognize. Republic Pennsylvania was written by senior Mady Ladd for her grandmother after the passing of her grandfather, and it's a beautifully-paced pop song. It's the only song here that's not arranged by Tom Anderson, and the arrangement written by Prabh Saini (Class of 2021) both fits beautifully on the album and is also just a great arrangement on its own: the lilting bounce of the backs keeps the song moving without being a heavy ballad.

The only thing that's a little unusual about Six Feet Apart is that in a list of twelve songs, three (?!) are covers of the band Lawrence. If you're not familiar with the original artist, this may not be an issue, but it's just an odd choice to devote a quarter of the album to the songs of one artist.

TAG albums have historically been a highlight for us at RARB, and Six Feet Apart is no different. It's a true testament to the strength of the program at Cypress Lake High School that the pandemic seemingly didn't affect the quality of this group's vocals or recordings, despite a lack of group rehearsals and an unusual recording setup. While we all hope that this pandemic is behind us sooner rather than later, it's nice to see that TAG didn't let it get in the way of its program or recording goals: I'm sure it's not the year that these singers had planned, but I'm so glad that the group was able to capture such a quality recording during this bizarre year.

As an a cappella educator, it's a known secret that there's no formula for group success. Every year is filled with discussion and debate about member strengths, song choices, and just a little bit of luck to have a year that is determined to be successful. The 2020 school year became a nightmare scenario for most groups, as the world boarded up overnight. The A Cappella Group is known to be a high school group that releases an annual album with strong reviews and excellent quality. The album liner tells the story that makes Six Feet Apart so meaningful. The recorded product lays those emotions bare in a stunning presentation.

Starting at the top of the album, the energy given by the opening two tracks is unreal. More has a slick uptempo groove that is headlined by soloists Isabella Sbarra Michelland and Wedler Lordeus. There is an amazing juxtaposition between the heavily rhythmic patterns followed by large jazz chords that make it impossible to not move while listening. Break My Heart is a more club-like uptempo, but still a phenomenal display from soloist Annie Vardanyan. The energy from these songs is dripping through the speakers, and it's clear just how excited the group is to be singing these songs. Tom Anderson did a wonderful job arranging these pieces and the group brings these songs to life with every beat.

There are also two original pieces in this album. Driving was written by and headlined by Michelland. She clearly did her homework to find every note and run that fits in her vocal wheelhouse, and she delivered a masterpiece. Republic Pennsylvania was written by Mady Ladd and arranged by member Prabh Saini. Ladd headlines this piece, and again this song is a clear example of someone finding what works best for their voice and using it to their advantage. I also have to give so much credit to Saini for this arrangement, which is simple but incredibly effective. These students are taking the time to really explore the a cappella medium and understand what makes them excel as performers. Look out for them in the coming years at the collegiate level and beyond, because I expect to see these names again.

Finally, we have to look at Six Feet Apart, the titular track of the album and the unspoken anthem of 2020. This piece is utter perfection in so many ways. It's challenging in the opening moments due to the pointillism in the opening phrases, but the piece suddenly explodes at the start of the first chorus. Soloist Makayla Sawyer is the focal point for all of the emotions that are present in this piece, and it's clear that those emotions are not limited to just the soloist. The album liner tells the story of the heartbreak the group felt at having the year ripped away from them. This track tells that story in lyrics, but it's clear that the group is telling their own stories of longing for closeness with friends that sit just past an arm's length away. You don't need to hear those stories, but you will feel all of them in this track.

When it comes to broad definitions of excellence in recorded a cappella, TAG is doing everything exactly correct. These are well-thought-out song selections that utilize the group members' individual and combined strengths, and they have the energy and emotion to make these performances truly exceptional.  It's easy to see why these kids get consistently high markings from RARB. If you need a good social distancing activity, simply put this album on and enjoy. You won't regret it.