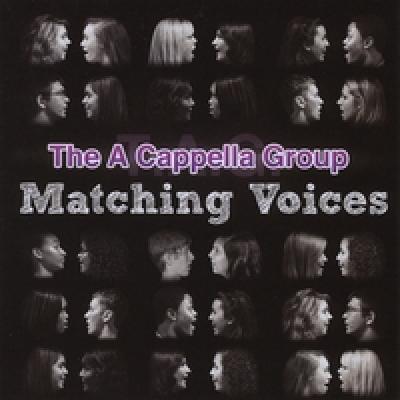 "For high schoolers." Those three words are somewhat inescapable in considering The A Cappella Group's (yes, that's the group's rather uncreative name) follow-up to its CARA-winning 2010 release High Tide.

On the one hand — for high schoolers — this is certainly an impressive effort, featuring sophisticated material, precision tuning and blend, a fair number of complex arrangements, and often terrific soloists. There is many a collegiate album I've been subjected to in the past that couldn't hold a candle to these kids from Cypress Lake Center for the Arts.

At the same time, there's a fair amount about this album that only passes muster because the ensemble is made up of high schoolers, and the scores above reflect this reality. For example, Just The Way You Are would sound pretty good to most people, I suspect, and might even elicit a "wow!" if you shared the age of the performers with the listener. But a closer examination reveals that it's just not all that interesting, with superhuman vp carrying most of the load, monotone word-based backing vocals, and a solo that gets a bit pinched in the upper registers. It's not bad at all, but it wouldn't be nearly as good as you think it is if it came from, say, the SoCal VoCals.

And the same holds true for quite a number of other songs. Eden Shelton does moody, cracky, closely mic'd attitude pop very well, but we've already heard a better effect on Glitter in the Air by the time we hear it on Jar of Hearts, in a very plodding, vertical arrangement from Tommy Jomisko that fails to inspire. Stephanie Weinberg does her best "cutesy" on Kiss Me, and it's a serviceable arrangement from Shawn Pearce with a good amount of texture in the chorus, but somehow the energy is lost and the result is a mechanical, sing-by-numbers feel that comes and goes without making any sort of impression.

Where the group fares better is either in sparser arrangements, like Randi Stanley's opener King of Anything with its confident solo from Haley Huston, or on the more lushly choral, blendier tunes that don't just sit endlessly on block chords but have just enough variation in the arrangement and attitude in the solo to keep them interesting — Ain't No Sunshine being a case in point.

Assigning credit and blame is tricky with a high school group because it's tough to know how much came from the students and how much was dictated by the faculty director. And using primarily third-party arrangements (as TAG does) muddies the waters a bit more. Suffice it to say, though, that any a cappella fans who listen to Matching Voices will wish that they had a chance to participate in such a group when they were in high school. In basketball, like in a cappella, it's rather unlikely a high school team could beat a college team (let alone a pro team). But Matching Voices suggests that the youngsters can at least give the collegians a good game — and that as much fun as they'd probably have playing, it would also be quite enjoyable to watch/listen to them do it.

In the liner notes for Matching Voices, The A Cappella Group (from Cypress Lake Center for the Arts, a public school in Fort Myers, FL) mentions that it only rehearses one day a week. This makes this album (the group's fourth since 2003!) even more impressive than it sounds at first listen. It's certainly remarkable for a high school group to put together an album that sounds this good — with excellent blend, good energy, and appropriate-for-the-group song choice — in the first place, and even more so with only one rehearsal a week.

That said, there are some issues here, and one is backing syllables. The group makes use of the "lyrics from the song as backing syllables" technique, which becomes particularly distracting on Just The Way You Are, and also with the phrase "Let's kiss" in the chorus of Kiss Me. The group fares slightly better when not singing words, but so many open vowels like "jah" and "dah" just detract from the song.

Those big open syllables draw attention to the group's other big issue: dynamics. These singers make great use of dynamics on some key moments of Ain't No Sunshine, but they don't do the same on other songs. The beginning of Jar of Hearts features a really sultry solo turn by Eden Shelton, but it's hard to focus on her when the backing voices are so loud. I wish they'd come in with a whisper so the song could've had a dramatic build. (I also don't love the all-in-unison chorus at the end of the song.)

There are some truly enjoyable moments on Matching Voices as well. King of Anything and New Soul both have a lot of momentum and offer good, if not particularly groundbreaking, versions of these songs. Overall, the album sounds good — especially for high school students — and is easy to listen to. But it's that phrase "especially for high school students" that's the challenge with this review: we here at RARB rate albums based on the whole of a cappella recordings, not just by grade level, and the simplicity of these arrangements combined with limited dynamic range makes this album only average overall.

Matching Voices shows what can happen when a group plays to its strengths. The talented girls and guys of The A Cappella Group, a high school ensemble that continues to wow me with its mature sound, execute bright and poppy material carefully and with great focus. The wheel hasn't been reinvented here, but this album is a solid effort that will really appeal to a generation of a cappella nerds reared on Glee and The Sing-Off.

I've already mentioned Matching Voices' brightness, but it bears repeating. Solos are uniformly placed forward, alternating between nasal and breathy. There's a general "Disney singer" sound to some of these solos, and it works with mixed results. Background syllables are crisp and percussive, with female singers sounding bright and cutting, and the male singers bringing their tone forward in a (generally) more nasal way. The end result of this is a focused sound, but when mixed with some vocal processing effects it takes on a bit of a robotic edge. Full chords don't quite have the large, lush ring to them when everything sounds so forward.

The material The A Cappella Group has picked really suits the sometimes overwhelming brightness. Bubblegum pop songs like Kiss Me, Fools Fall in Love (a lovely modern updating of the original), and New Soul suit The A Cappella Group perfectly. The infectious cheer and earnest soloists really elevate the group's sound, making the singers sound positively adorable. Less successful efforts like Just The Way You Are and Jar of Hearts seem to be calling out for a significantly different group sound, a sound more rooted in passionate emotion than winking cuteness. A tasteful middle ground is The A Cappella Group's Ain't No Sunshine, which succeeds thanks to an excellent solo and good groove.

There's a lot to like here, and The A Cappella Group should feel proud that it's really broken out of the standard high school group mold. Matching Voices may not be as good as The A Cappella Group's previous release High Tide, but it still manages to have some wonderful moments.

This album is available at CD Baby and the iTunes Store.