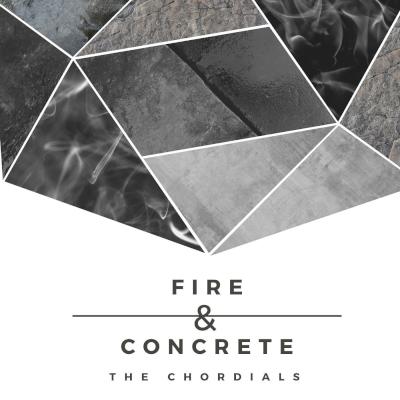 The Chordials's Fire & Concrete is an 8-track pop release graced with truly compelling leads. Rangey, melismatic, and soulful deliveries form the core of every track. And those tracks are well-matched to the group's strengths; cohesive from an album perspective, and independently interesting selections. The group scores with crowd pleasers from Billie Eilish, Charlie Puth, and Bon Iver, but the singers don't shy from the harmonic peanut butter of Jacob Collier, either. Most rewarding of all, the group offers its own original, We Won't Run, penned and arranged by the talented Kennedy Jean-Baptiste (also an album producer and arranger). Not only is her rock ballad satisfyingly dramatic, but her lyrics are inspirational: "I will be seen. I will be me. Silence isn't in my blood. I'll never hide. I won't run." This reviewer is all snaps. In 2020, this is exactly what the world needs more of.

In terms of critiques, the album struggles with a mix philosophy (it feels deliberate rather than accidental) that elevates the backs to a prominence that can occasionally overwhelm the leads. Nearly every song at some point feels like watching a well-rehearsed play in which the talented actors walk from center stage to delivering their most heartfelt revelations partially blocked by set pieces. It's more tolerable when the backs sing pure vowels or hums; closer to eye-rolling when the syllables are consonant-dense. The wider the dynamic range, the more backing parts can weave around the leads, momentarily taking prominence at just the right moments. But here most tracks are sufficiently compressed to limit the effectiveness of this approach. It's very often kind of in your face, a trapping of all commercially released materials, really, but when that's the case, something has to give space; it's either the arrangements or the mix, and here, at least sometimes, neither budges. This remained true even after reviewing this release at different volumes on different headphones, some "prosumer" and some "you-paid-what-for-those-audiophile-headphones?!?". The only solution I found is tailor-made for fans: simply listen repeatedly until the mind catches and mentally amplifies what the ear struggles for. The more numerous the listens, the better!

Overall, there's much to celebrate in the Chordials's latest. And musically, fans are sure to find a lot more fire than concrete.

If ever proof was needed (note: it wasn't) that artistic choices and trends are passed down from "generation to generation" within collegiate a cappella groups, despite the inherent turnover in membership due to graduation, Fire & Concrete from the Cornell Chordials could be the most recent Exhibit A. Regrettably, while I've consistently been a fan of this group for more than a decade, this latest effort perpetuates — and in some cases exacerbates — some of the shortcomings of the group's 2016 release, Surface.

First and foremost, there is little fire or concrete to be found at all. That is, there is neither a pulse-quickening, soulful passion that blazes through the music, nor is there a solid, foot-tapping, anchoring foundation to what minimal material here could realistically be characterized as up-tempo.

In some cases, the culprit is almost instantly noticeable. The muffled, frustratingly weak kick drum and mushy snare and cymbals in Commit Me are baffling, when we've already heard what sort of vp this group and its production team are capable of on I Warned Myself. (Yes, I have criticized this group in the past for overly-mechanized, inhuman vp, but there is surely a happy medium that is not achieved here.) The solo on Bass Song receding behind the mix almost as soon as the song starts to take off is another mystery.

Repertoire choices also do the group no favors as hinted above. The octet of songs featured here seem to fall primarily into the categories of either atmospheric, indie, quasi-folk, semi-angsty, introspective, meandering melody ballad, or funk/gospel-infused R&B/soul bop. That choice isn't inherently problematic, though on a short album, it gets a little monotonous.

No, where the Chordials fall especially short comes back to an issue that showed itself already back on The Shadow Aspect in 2013 and continued on the aforementioned Surface: interpretation. To the group's credit, these aren't slavish reproductions of the originals and that is most welcome. What's more, while a more prominent issue in the past, most of the soloists here are well-suited to their songs, though they do occasionally give in to excess, veering toward a more strident, almost musical theatre-y tone in what feels like it should be more plaintively-delivered material.

My core issue, however, is that while they're not carbon copies of the originals, the arranging choices exhibited here far too frequently rob the song of the very thing that made it compelling to hear covered in the first place. Bass Song is a terrific, natural choice for a cappella, but in the throats of the Chordials, gone are the upbeat "hits" that give the song so much of its groove. Instead of an insistent, dotted vocal line against a rock-solid beat, we get an overly complicated beat that itself anticipates the barline and so the solo becomes far less funky. Instead of the build that is featured in Charlie Puth's original I Warned Myself, everyone is in straight from the get-go here, so there's less of a journey over the course of the song. And the group inexplicably adds a rather traditional snare drum to the back half of the song which gives it a much squarer, almost '80s feel that I can't believe was purposeful (or if it was, I just don't care for it). In multiple moments in quieter songs — the "doo-zha-da" coming out of the bridge of When the Party's Over, the "zhin-nin-no" of the second verse of 8 (Circle), just to name two — the exposed clunkiness of the aca-syllables are not only distracting, but they undermine the essence of the feel that the group sounds like they are going for.

To Kennedy Jean-Baptiste's credit, then, it's really only her arrangement of Omens that stands out by way of its ability to take the original song and perform a legitimate transformation to a cappella rather than falling victim to subtraction by either addition or complication. Here too there are one or two fleeting moments of ill-chosen syllables and a solo that might still be a little overwrought, but the crunchiness of the chord choices and the harmonization of the solo riffs/melismas to include the background voices makes this a meaningful vocal interpretation that preserves the soul of the original while showcasing it in a new light.

That's the sort of balance that has eluded the group on its most recent albums and one which I hope the singers can recapture soon. The Chordials did well to establish a legacy of quality from the mid-2000s through the mid-2010s, and with a little more focus not only on choosing an eclectic mix of repertoire, but also on carefully tailoring the arrangements to be faithful to that repertoire, that legacy can continue for years to come.

Let's start by saying that images that come to mind with the title Fire & Concrete is a mafia hit on someone. Thankfully, none of us will be swimming with the fishes after listening to the latest recording by The Chordials from Cornell.

This album by The Chordials may irk some people, as it did to me upon my first listen. While it is a good album in and of itself, it is absoluely a polarizing experience. I would describe Fire & Concrete as a pallid attempt at an experimental album. Not really a concept album unless I'm not completelly grabbing the concept, but more like a kalediscope of Gen-Z emotions, maybe? It is full of middling angst and ennui, yet inexplicably what could be a really robust experience is tempered way down by a strong cloak of pampered restraint. The album isn't a roar of any sort but a hard gnashing of the teeth. As with its more dulcet tracks, the arrangments and performances could have included a lot more yells and screams and wailing against the wind, an evocation of true emotion. This is how we think we should feel instead of actually feeling it.

I know I'm asking a lot of this group and a lot from this album, and I think its because I have a strong affinity towards The Chordials and the artistry of the group's music that they've put out during the past fifteen years, and so I expect a lot. All of the elements are here for this album to be truly outstanding, and instead we get something that is really good if you are feeling it at the time of listening.

As a reviewer with too much a cappella up in his head, I make wild comparisons to either earlier albums or different groups when I'm writing a review. So unfortunately for this iteration of The Chordials, they are dipping their artistic toes in the pool that is dominated by V O I C E S, The Harmonics, and the granddadiest of the daddymacs of eccentricity, Gestalt. And The Chordials come up short at every turn. Never have I been able to see such a direct correlation and failure to complete than in this instance. The musicality and originality isn't there to compete with the art that is Begin Again, there isn't enough consistent bite as Fault of Imagination, and just a short exasperated sigh when contemplating the live or recorded existential sensibilities of Body Memory.

I was tricked at the beginning because I let Bass Song wash over me and it felt new and refreshing and I thought that I was in for an incredible ride with the group and this album. But alas, while I found elements to really like in the next track ... by the time Commit Me came around, I had committed myself to not enjoying it anymore.

As stated, Chordials's fans will like this album. It's solid, and sung well with good production values. I just want more CHORDIALS present in future recordings.