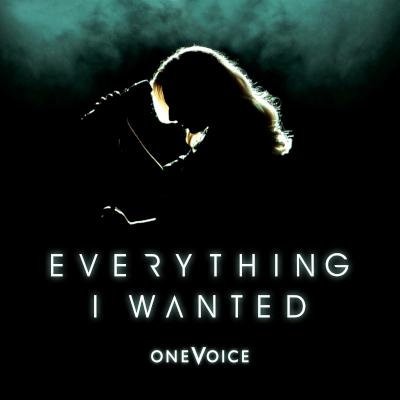 It's important to sustain youth arts, and Everything I Wanted provides all the convincing you need that young people can unleash horizon-reaching talent when given the right support. Featuring songs that largely fit into a folksy-pop soundscape despite spanning decades and styles, the musicians of OneVoice put their hearts on the line with this high-emotion release.

You'll be gobsmacked listening to the first three tracks in succession; I'm failing to recall a stronger opening on any release than what hits us here, particularly given the difficulty level of Rob Dietz's arrangements. Imagine workshopping your average high school a cappella group on Daisies; I'll wait for the outcome, but I'll probably be waiting all year to hear the other kids eke out a few degrees of recognizability. Dancing in the Dark is my favorite piece on this release; why are these lyrics sitting so differently from Springsteen's original? Is it the timbre of Gabby Pence's voice? Is the introspective and even melancholy vibe that replaced the soundscape of '80s instruments? It's a breathtaking listen, but more importantly, it sounds like a new work. Fire and Gold ends this memorable three-pack with tremendous force and inspiration. Herein lies the delightful danger of being OneVoice: there's no one to compare this group to but itself, a concept that does tap us on the shoulder a few times during Everything I Wanted.

Here's one tap: I certainly don't mind listening to a full roster of outlandishly capable female-identifying leads, and I see no need for a 50/50 soloist split, but a few of these songs do sink below the lead's range during register shifts. There are solutions for this but they weren't utilized, probably because of the impact the leads can pull off when belting higher. But the featured male-voiced leads are also terrific, so I would think a little more critically about this area next time. When six tracks roll by before we hear a lower-staffed solo on number seven, one wonders if the group doesn't have as much confidence in the tenors and basses and thus listens a little closer to the production for cover-ups. Then one imagines how the balance and blend sound live. I'd rather stay with the music at hand. One is another shoulder tap, a track which is audibly less elegant in the score, and percussion patterns and percussion treatment than the rest of the release. That's the tough part of being wildly awesome: if something is merely awesome, it attracts attention to itself.

Per usual, there are some dazzling bleed-overs in the recording, mini original compositions bridging tracks, a technique that has long been OneVoice's signature strut. Dietz has perfected his approach this go-around, making us lean in even closer to these moments than for the named songs. Perhaps there's an opportunity to let a student try their hand at these short bursts of sonic creativity through a mentorship? Seems like a very fine way to advance one's composition skills ahead of post-high school work in a manageable way.

And I do think many of these voices will find significant post-high school success after OneVoice. In particular, the album's bookends, Sophia Bonasso on Daisies, and Josh Tarver for You, already sound professionally billed. Somehow, J.D. Frizzell and his hardworking group have done it again. Congratulations to these singers, thank you to their parents for their many contributions, and purchase OneVoice's latest for your library to keep these impressive projects sustained.

Briarcrest Christian School's OneVoice has become a staple in the a cappella community, and its now-annual releases have been a consistently welcome part of my reviewing queue. Even with a changing roster of young pre-professional singers, director J.D. Frizzell delivers a high level of musicianship and quality, involving some of the best in the business to provide both an excellent educational experience and a high-quality album to listeners at large. While Everything I Wanted is not everything I wanted, OneVoice does not skip a beat and adds another strong album to its discography in a pandemic year in which in-person singing has been universally challenging, and that is something truly commendable.

As per usual, the editing work performed by Alex Green and Alex Koutzoukis of Plaid Productions, mixing by Angela Ugolini of Aurum Productions, mastering by Dave Sperandio of Vocal Mastering, and arrangements by Robert Dietz are of the highest caliber, as their reputations precede them.

The solo work by Sophia Bonasso on Daisies sets a high bar, traversing many register shifts in short spans with great personality-driven pronunciation. Peyton Tarver's Fire and Gold strikes with a similar shimmer in tandem with the driving force of the background singers. Dietz's arrangement of Stevie Wonder's For Once In My Life in a lower key with a slow opening gives soloist Marvin Holt ample opportunity to shine, and he comes through in his genuine style rather than a showiness that would pull too much focus from the clever cover. Top to bottom, Hard Sometimes is a thoroughly engaging track, with Anna Baccus' able solo vocals buoyed by powerful background vocals that combine to create a homogenous anthemic rendition.

Everything I Wanted is written largely in a tapestry style with tracks transitioning seamlessly into each other. For example, the segue from Dancing in the Dark to Fire and Gold is so brilliantly imperceptible, it has taken me nearly a full minute to notice the song has changed multiple times. That same strength comes with a caveat: the first six tracks are sung with a treble/upper-voice soloist, and that lack of variation in a mixed-voice group becomes somewhat monotonous when the ranges are reduced, impeding repeat listenability. Some soloists lack the same driving energy of the arrangement underneath or the strong vocal percussion, creating an unevenness and keeping that track from uniform excellence. In those cases, such as in Dancing in the Dark and I Dare You, the lyrics imply an intensity that is heard more in the background voices than in the soloists'. There is always something to appreciate in each OneVoice track, but when the elements don't combine, there is something left to be desired.

OneVoice has set an incredibly high bar over the years, and while that is difficult even for iterations of the group itself to reach, Everything I Wanted is still a strong showing from a traditionally phenomenal group and a must-listen for any a cappella fun.

The most amazing part of Everything I Wanted is how well the songs not only flow together, but the energy does as well.

Consider the first three pieces of the album. Daisies is a great opening statement for the group, helping to prepare the listener for the levels of energy and complexity that are about to come out of the speaker for the next 45 minutes. Dancing in the Dark continues this energy, even raising the bar. However, by the time we get to Fire and Gold, OneVoice has finally arrived. This piece is an explosion of sound that takes two tracks to warm up enough to deliver the full impact. There was a good deal of work done by arranger Rob Dietz to make sure that every piece was growing, while still allowing room for a third track to make an impact.

The next tracks are standalone tracks. It's a curious move by the group, as having some tracks flow together while others don't can at times be jarring. It's a stronger shift just based on the next two selections. Everything I Wanted has elements that can be described as both dark and haunting, yet also uptempo at the same time. Somehow, there is a disconnect, resulting in what feels like a serious piece sung with smiling faces. It's such a curious selection to me, as this is the titular track of the album. I want to love every second of it, but somehow feel slightly disjointed listening to it.

This is followed by Gravity, a piece originally by Sara Bareilles that has been covered by so many a cappella groups that I'm always hoping it's a new track with the same name. However, OneVoice does a tremendous job breathing new life into the piece. Nicole Bartley's voice is stellar, and the group does a great job of letting the story be told. This piece has a perfect balance of harmony and dissonance, driving rhythm while freely flowing, and a perfectly dramatic build and release at the climax. This is a piece that I will happily see covered again and again.

When you get to the final track of the album, we discover exactly why OneVoice is one of the best groups in recorded a cappella. You is a perfect balance of energy and emotion. Josh Tarver's solo is perfectly fitting to the inspiring message of the song. However, more important than just the message of the song is the ending minute of the piece, which features bits and chunks of every other song on the album. This entire release builds to one singular moment. It is an absolutely brilliant arranging decision on Rob Dietz's part to have a whole album reprised in such a satisfying manner. This is the level of quality that OneVoice has become known for.

The biggest gripe I have with Everything I Wanted is that it almost feels "average" for OneVoice. This is a group that has constantly and consistently shaped the contemporary a cappella genre, but this album lacks something to take this from a collection of good songs to an amazing overall album experience. Make no mistake, Everything I Wanted is a solid addition to any a cappella collection. However, I will wait for the next earth-shattering moment that reminds us of how high their standard of excellence is. Take a listen and see if you agree.

This release also streams on Spotify.