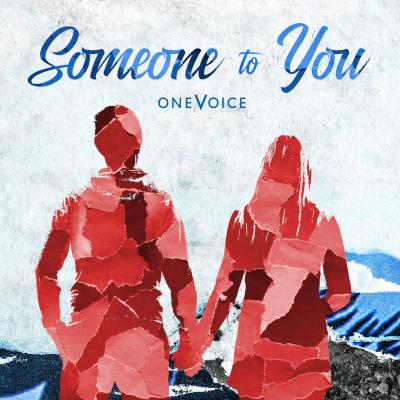 Someone to You is a big, bright album, notably lighter in tone and presentation than recent releases from OneVoice.

There's a lot of sorrow in the a cappella community, over losing live shows, in-person rehearsals, and precious studio time to document an era of members that may not return together again as the same group. Instead of singers, we are now "superspreaders". In this time of artistic loss, Someone to You is a reason to celebrate; groups are still here, through downloads, pressed CDs, streaming tracks, YouTube videos, and songs that we can play again and again. We'll take whatever we can get, and OneVoice stands with the best we have.

The namesake track, Someone to You, is the hope we need: a huge, clouds-are-clearing, sun-is-shining work that reminds us of the power of collective, precise, joy-driven singing, the best any ensemble could deliver from any venue out there. It's also the complete opposite of the edgy, darker tracks this group is known to message out to the masses, the kind that would bleed across tracks like tear stains. I'm here to appreciate the new light; hopefully you will, too.

Emotion reigns the day on Someone to You. If you've got a comb handy, you'll need one to flatten down your goosebumps after listening to Peyton Tarver's genuine desperation on Secret Love Song, Part II. Impressive musicality, measure by rhythmically fascinating measure, is featured in spades on Johnny DelToro's arrangement of Symphony. This is dazzling, nearly impossible to believe singing and production, with explosive joy from OneVoice. Wrapping up the first section of this release is storytelling soloist Nicole Bartley for Light On.

Somehow, young soloist Anna Baccus makes a complete, double act show out of her turn at the microphone on Thinking About. Her seasoned, skilled voice hurts us in places most of us avoid: "All I'm thinking about is not thinking about you." She's someone to keep a close eye on.

And how about OneVoice arranger mainstay Rob Dietz's contributions here? Some of these pieces are so advanced and precisely designed in composition that I'm not sure any group, OneVoice or not, could hit every intention perfectly. These are masterworks from a mastermind. Shawn Mendes will need to take notes after Dietz's bolder, far more urgent, far more permanent take of In My Blood that should be performed by a professional philharmonic. What just happened?!

Even more delightful: OneVoice artistic director J.D. Frizzell contributing the album's unexpected highlight, Underground. This 2012 release comes from singer-songwriter Cody Fry, a lilting ditty about an incident on the train tracks. Frizzell expands the piece in both running time and concept, tipping it toward rock opera midway through. This is fun, high school ready a cappella.

Lastly, Higher and Higher comes out with a bit more jazz hands and suspenders than it probably should have, despite the audible creativity in Dietz's approach (how many versions of this iconic work can you have that truly differentiate from one another, and how far are you willing to go from the source material)? That said, the message still rings well for Someone to You's closing piece.

Missing from the liners: an artistic statement about why these songs were chosen, how the group's craft was developed, and how the group's process achieved goals. A small but meaningful way to greet the listener at your door. If there's a story beyond each album, we are loyal fans, and we want to know.

OneVoice specializes in excellence, dominating the high school scene year after year. Someone to You is a markedly different flavor in its treat shop; go ahead and indulge.

In a way, life is nothing more than one long sequence of connections: to people, to actions, even to things. They may be connections lost, or connections found; and tragically, some are simply missed. The inevitable result is emotion, ranging from gratitude to despair, anxiety to comfort. Briarcrest OneVoice, the consistently successful mixed a cappella high school group from Tennessee, explores these chain reactions in its latest album, Someone to You, and in the process again offers the a cappella community a heaping dose of thoughtful, sonically pleasing music. As I've extolled in past OneVoice reviews, it is this meticulous consideration and exploration of themes which really sets the group apart from the overwhelming majority of vocal groups out there. And, as with past albums, the execution of the entire production — from song selection to arrangements, singing quality to sound recording quality — stands out.

Back for the effort is arranger Robert Dietz, penning charts for six of the nine tracks, many of which effectively use repeated phrases and rhythms (ostinatos) to provide or sustain momentum in support of, and sometimes in place of, vocal percussion. Dietz also offers something for all OneVoice singers, from space for soloists to breathe (In My Blood and Secret Love Song, Part II) to carefully textured lyrical backing parts (again, In My Blood) and lush, crunchy chords (Thinking About). In fact, and not at all surprisingly, these young singers can't quite pull off every one of Dietz's gems. In My Blood, for instance, has the bones of a truly brilliant take on Shawn Mendes's angsty, urgent anthem but the vocalists can't quite translate that feeling, providing instead a pretty-sounding but overly controlled cover. The group struggles similarly with its version of Maggie Rodgers's Light On, where it again loses the connection between tone and lyrics. The album's namesake song, Someone to You, by contrast, crackles with energetic singing and positively soars in the chorus.

One of the best arrangements on the album, however, comes from the group's longtime director and visionary, J.D. Frizzell. With Cody Fry's Underground, Frizzell converts a perky, acoustic bauble to an aural cocoon that begins with an ominous undertone before evolving in sound and tempo, emerging as a bright, shiny butterfly tinged with colorful chords. Perhaps the most impressive achievement, however, is how Frizzell takes another artist's distinct-sounding song and infuses it with a sound palette that feels very much at home with the other tracks on this album, and with OneVoice's collective voice.

Though a few of the soloists struggle to connect fully with their lyrics or music, two stand out: Anna Baccus does with her rich tone, examplary control, and spot-on take with Thinking About, as does Peyton Tarver with her rich, passionate turn in Secret Love Song, Part II. Benjamin Cheng's precise, strong lead in Underground is also impressive.

Rounding out the album is an outlier, a tune from another era, the 1960s — (Your Love Keeps Lifting Me) Higher and Higher) — performed in the style of an a cappella tradition from another era — the 1990s — complete with exuberance, pep, and hand claps. The arrangement is a little too busy, but the singers of OneVoice don't seem to mind, because they are having too good a time connecting — with each other and, thankfully for listeners, to the music. These kinds of connections are what make performing music fun and impactful. And that kind of success is why OneVoice remains one of the top recording vocal groups out there.

If there is any welcome sight in this strange calendar year, it is the annual album release from Briarcrest Christian School's OneVoice, a trailblazer for educational a cappella and a mainstay of the a cappella community at large. Combining innovative covers of current popular songs, unique takes on old favorites, and reframes of lesser-known new ones, Someone to You is a characteristically strong album and a testament to the group's consistency of musical excellence.

Vocalists showing musical maturity beyond their years seems to be a trademark of OneVoice, and they do not disappoint with this album. In particular, heartfelt ballads with great emotional contrast and registral shifting for treble voices are masterfully handled: Peyton Tarver has a stunning performance on Secret Love Song, Part II and Anna Baccus makes deceptively difficult leaps sound easy in Thinking About. Master arranger Robert Dietz contributed two-thirds of the songs for this album and his range of expertise is on full display. Besides having a great command of varying textures between sections, his precise attention to detail can be seen, for example, in making small differences like single syllable changes significantly felt or adding one non-chord tone to contribute the perfect color for the moment.

In addition to Dietz's arranging and the talented vocalists assembled and directed by Dr. J.D. Frizzell, the production staff is among the best of the best. Some of the usual suspects who work on top a cappella projects, including Alex Green, Alex Koutzoukis, Dave Sperandio, and Angela Ugolini, deserve great praise for the clean, professional sound that not only draws in listeners from the casual to the experienced, but keeps their attention and brings them back for subsequent listens.

On the flip side, however, the stellar team can help to hide relative imperfections such as an occasional line lacking in energy or dynamic movement, and bare background vocal lines without harmonic support, something that occasionally arises earlier in the album. Additionally, for all of the good in Secret Love Song, Part II, percussion is missed by the end, as there isn't anything harmonically, rhythmically, or sonically compelling enough to support the soloist's work. This is, of course, splitting hairs, but such is the level of scrutiny that comes when the group continually raises the bar.

Someone to You closes on that note of spectacular, innovative musicianship synonymous with OneVoice. Specifically, on the heels of Flying's inclusion on Voices Only 2019, Frizzell and OneVoice have an absolute masterpiece in their cover of another Cody Fry song, Underground. Frizzell's own arrangement has some unique vocal cascade effects, effectively reflects the text harmonically, and varies the feel between three distinct sections, adding another layer of interest to an already exciting Tennessee-based indie artist's song. Additionally, after successful renditions of Higher Ground from Giants in 2018 and the titular song from Higher Love in 2016, the album closes with a brilliantly fresh take on (Your Love Keeps Lifting Me) Higher and Higher, featuring a background vocal intro line delightfully reminiscent of Stevie Wonder's Superstition.

Someone to You is proof that a cappella is alive and well in Memphis and should top your quarantine a cappella wish list. As has been the case in my coverage of OneVoice's releases, my advice is that you can't stream this soon enough.

Someone to You streams on Spotify.