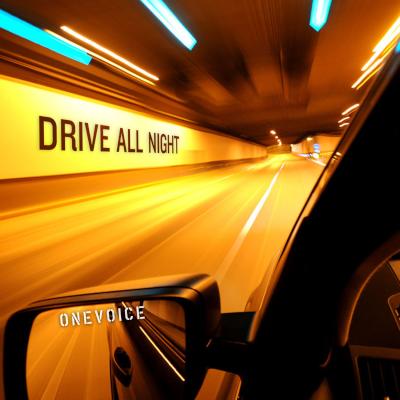 Briarcrest Christian School's OneVoice has made a name for itself under director J.D. Frizzell. Utilizing professional arrangers like Ben Bram and Robert Dietz, and mixing engineer Dave Sperandio, the group easily leapfrogs from newbie to young professional. The singers perform with a maturity of blend and musicality far beyond their tender years. Especially impressive on Drive All Night are two aspects: the group's leads and the arrangers' artful transitions between songs.

It's terribly difficult to single out soloists on an album this consistently good. Victoria Wallace may have one of the most distinctive voices, a trait which makes her powerful delivery on Dream On so much more than a cover. Heath Rooks and Daniel Schirmer both deliver surprising mature tones and emotional cores for high school men on Drive All Night and Below My Feet. Hannah Gray's soulful melismas in Gravity are an absolute treat. Anna Strong brings a beautiful vulnerability to Clarity. The many mash-up leads are all so well balanced in talent that one cannot begin to choose favorites.

The transition between tracks one and two is the initial cue that this album has some surprises in store. Without an iota of silence, the listener is led from the end of one to the beginning of the other. Only the digital read tells you that you've left the realm of the mash-up and begun a new track. The transition from tracks five to six, six to seven, and seven to eight are also quite beautiful, again inspiring one to regularly listen to the tracks back to back, and even to look for connections between the material. With more and more groups releasing singles, Frizzell's choice to double down on the album format is a bold and welcome one. This attention to transitional detail makes Drive All Night one of the most unified releases in contemporary a cappella; a lovingly assembled collage, not a row of yearbook portraits.

Tracks three and six share one of my biggest concerns on the album: tuning. We are in the age where practically all albums receive the attention of editors who remove unwanted noises, distracting breaths, and unkempt rhythms. Perhaps most importantly, these editors also correct tuning issues. So when reviewers rate this category today, we are commenting not only on accuracy, which is typically precious close to perfection, but also upon the naturalness of the sound in relation to the music. This is because some pitch correction leaves sonic artifacts that don't sound right in all contexts, commonly (though not always accurately) referred to as the "auto-tune effect". Those artifacts are present on these tracks. So someplace between the performance accuracy and the editing craftsmanship lies a problem that mars these scores just a bit.

Liner notes are commendably thorough, crediting not only the entire creative and performing team, but, thankfully, all composers as well. My only complaint, and it is a minor one, is that the mash-ups actually have the word "mash-up" in the title, where the best practice in liner notes would be to list the songs separated by a slash, since the title of the song is not "Mash-up".

For anyone interested in high school cappella at state-of-the-art levels, Drive All Night is a must-own.

Two of the rarer commodities in the recorded a cappella universe are clear purpose and intelligent singing. What is a reviewer to think, therefore, when these are two of the stronger characteristics on a new album, nevermind that it's an album from a high school group? I don't know about anyone else, but I feel lucky for getting this assignment from Briarcrest's mixed group OneVoice, because Drive All Night is an album with vision, and mature, thoughtful singing.

Programmatic music has traditionally been written to tell a story or depict an atmosphere. OneVoice has instead arranged a collection of cover songs, including several mash-ups, which suggests both a narrative and an environment. Under the direction of J.D. Frizzell, the group commissioned all of its arrangements from professionals Robert Dietz (fellow RARBer) and Ben Bram. By allowing outsiders to make the difficult decisions in shaping the group's arrangements toward its vision, Frizzell was able to shift his, and the group's, focus to performing. The result is smart, engaged singing which actually demonstrates, among other things, a concept I have rarely if ever been able to praise in a RARB review: phrasing. The young men and women of OneVoice do a truly commendable job of shaping their phrases, and I do not mean this as a relative compliment. It's not that they do a great job "for young singers." They do a great job, period.

It is no surprise that the arrangements from Dietz and Bram are well-crafted. Dream On is Dietz at the top of his game, with an edgy new beat for an old rock staple, some cool atmospherics, and really engaging textural contrasts throughout. But I was especially taken with the seamless mash-ups. Bram's Radioactive/My Songs Know What You Did in the Dark is particularly impressive, as the songs work better together than I would have expected, and Heart Attack/It's Time presents an engaging dialogue between the female and male soloists. I must also note that Dave Sperandio's mixing effectively emphasizes and builds upon the terrific charts, providing thick, lush ambience or present, fuzzy buzz with equal success. Kudos are also earned for his thematic intro to the album, a quick radio flip through each of the tunes which will follow.

Enough about the professionals, though; let's get back to the amateurs here. Anna Strong's solo on Clarity is sweet and tender, and both she and Hannah Gray (soloing on Gravity) show commendable emotion and restraint with their performances. Caroline Mohler and Wil Faulk have a delicate interplay in Heart Attack/It's Time which is extremely effective. While it was surely enhanced by Ed Boyer's editing, the vocal percussion throughout is purposeful without being overbearing. The backing voices do a great job with a variety of stylistic assignments, from short arpeggios to long, sustained phrases without ever sounding bored or underprepared. You can actually hear that they are singing with proper breath support!

With Drive All Night, OneVoice takes the listener on a brisk but meaningful journey, one with longing and danger, communicated through powerful, considered, and dynamic singing. There is often a temptation to talk about how good an album is "for a high school group", but OneVoice has proven it needs no such caveats. Drive All Night is an album produced with care, skill, and most importantly — great singing. Congratulations to OneVoice, and thanks for the ride!

OneVoice presents a concise and inspirational album with Drive All Night.

This album features arrangements from Robert Dietz and Ben Bram; editing by Alex Green, Alex Koutzoukis, and Ed Boyer (vocal percussion); and tracking, mixing, and mastering by Dave Sperandio. Drive All Night begins with an electrifying mash-up of Never Close Our Eyes, As Long As You Love Me, and Sweet Nothing. The juxtaposition between this opening track and the one that follows, Clarity, is alleviated by a luscious transition and Bram's relaxed interpretation.

Bram's soulful arrangement of John Mayer's Gravity combined with the talented performance of Hannah Gray captures the essence of the original in an unexpected and wonderfully new way.

The title track, Drive All Night, is originally performed by NEEDTOBREATHE and arranged by Bram for OneVoice. Heath Rooks delivers an impassioned and inspirational performance, perfectly tying together the theme of moving onward and upward that permeates the album.

Anna Stewart and Wil Faulk's duet on Bram's mash-up of Radioactive and My Songs Know What You Did in the Dark keeps the energy and interest going following Drive All Night. It is between this mash-up and the next that we find our second through-composed transition, expertly setting the listener up for a powerful and textured mash-up of Heart Attack and It's Time.

Another well-placed transition leads the listener to, arguably, the strongest track on the album, Dream On. Dietz's arrangement combines with the nuanced and mature performance of Victoria Wallace to capture the lyrics of Steven Tyler's original in new, unexpected ways.

The last transition, drawing from Pitbull/Christina Aguilera's Feel This Moment, leads to a hopeful version of Mumford & Sons' Below My Feet that ties Drive All Night together.

After reviewing this high school group's last album, I concluded that Here To Stay fit perfectly amongst many of my favorite collegiate a cappella albums; the same can be said of Drive All Night. If you haven't checked it out already, I highly suggest purchasing it!