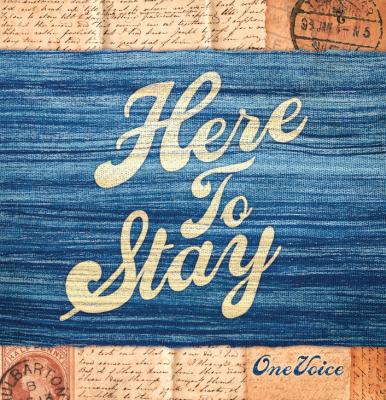 The album Here to Stay is impressive, but it's also a cautionary tale. Neither legacy nor formula is a guarantee of excellence. Where OneVoice's prior release Another Level soared and surprised, combining artistry and excellence in every area from leads to arranging to production, Here to Stay is a balance of good, excellent, and average work. But let us remember that when a HS group does a pretty good job compared with all of recorded a cappella, that's still an impressive achievement.

In keeping with its tradition, OneVoice features the arranging work of the most well-known scribes in a cappella today. These arrangements make a strong impact on the listeners' experience, sometimes even rivaling the performances. One reason to pick up the album might even be to sample and contrast the arrangers' styles.

Director J.D. Frizzell's delicate trace of My Immortal is, hands-down, the album's standout arrangement. There's an adage that great arrangements are made for singers, not voice parts. Perhaps Frizzell knew his group's voices so intimately that he couldn't help but reflect them in his artful choices. Frizzell's use of simple, open and closed vowels is nothing short of elegant, creating an emotional, spectral, and dynamic arc that breathes life into every measure. Hayley Pennesi and Caroline Mohler's soaring, insistent leads makes the track wholly irrepressible.

Wide Awake, while phrased nicely, is, ironically, a bit sleepy. Crazy Ever After has a simple, emotionally effective treatment of the staggered lead lines but leans a bit distractingly on its back-up "chengs". Suspicious Minds has some delightful, inventive chord substitutions but suffers from excessively repeated short phrases, and also features the kind of "neeeoww" faux instrumental sound that amazes when performed to synthetic perfection but lands uncomfortably when performed as a word.

Crazy Ever After literally asks a note too much of its otherwise excellent soloists. Where mid and high notes are textured, powerful, and heartfelt, the lowest notes, of which there are more than a few, die in an emasculating whisper. Don't You Worry Child suffers from precisely the same issue. Both songs are thoroughly enjoyable, but either the key, melody, or mixing should have been altered to accommodate the singers' actual ranges.

Nick Girard's production work on Don't You Worry Child is top notch, adding a nice boost of energy to the album's most upbeat number. And the addition of Overboard as a featured group on the track is an interesting turn, marking a rare, albeit limited, high school-pro collaboration. Robert Dietz's arranging is at its best here, and his synthy textures harken back to his own award-winning HS release.

The lilting ballad Here to Stay features the impressive original writing of no less than seven group members. The song overflows with yearning and sadness, truly more than we'd like to believe young people experience, though we know full well they do. There's also a generous helping of musical activity, with backs moving through the scales and parts delivering opposing vowels. It's sung well, but more space could have let this ballad breathe more freely.

OneVoice is steadfastly musical. Soloists and backs are consistently impressive with both technical skills and a genuine, mature emotional core. Production is warm, shiny, and cohesive. Even liner notes are handled professionally. Here to Stay is truly a good album, and for a high school ensemble, it's nothing short of extraordinary.

It's hard to hold the line after the wide-reaching and enduring thrill of Another Level. With Briarcrest's latest release Here to Stay, we're presented a good album with one extra sparkly showstopper in Don't You Worry Child (featuring Overboard). Very frequently, this "Good + 1 ES" is the precise outcome on collegiate albums. So, OneVoice is still performing at the collegiate level and all is well for Briarcrest High School. Heck, we give pro groups "4"s around here all the time. These kids are awesome and I hope they know it.

No one can complain that these arrangements are basic or dull. Actually, sometimes they are so complex they tip too far and sound like there's arrangements within the arrangement (most especially Wide Awake). It's a fine balance and the nuances to be carved should ideally be dependent on the current group make-up, which is probably why Mr. Frizzell's arrangement (My Immortal) works so well — he knows the singers and their vocal colorings, their vocal strengths. So many versions of My Immortal need trimming because the one-last-time ending is just one time too many. Happily, this arrangement actually ticks up in intensity on that last clutch chorus, hallelujah. Respect. Working far less successfully is Suspicious Minds with its abrasive cat howl-sounding syllabic choices. Unfortunately, the circus of syllables in the backs from the very start all the way to 1:48 smother the melody. Do not lose the melody, or you'll have nothing to get behind except the rhythm, which in this case, is largely just a pacesetter. At 1:48 in Suspicious Minds, the melody flexes its muscles and the real fun begins which leads us to a spectacular cluster chord, but it all leaves us too soon and we're back to the cats.

Gratefully, age apparently has no bearing on emotional conviction, as evidenced on the one-two punch of Crazy Ever After and Wanted You More which both twist the soul. The amazing vocal control from the trio and duet leads help the effect in spades; it's hard to sit so still on close harmonies, but it's childsplay here. Obviously, these performers have a very strong instructor. Moreover, the group and all leads sound talented and confident from start to finish, which is another significant achievement for Briarcrest and Mr. Frizzell.

This one won't disappoint. Enjoy Here to Stay and keep supporting the magic of high school a cappella.

With arranging help from a cappella luminaries like Robert Dietz, Nick Girard, Tom Anderson, Ben Bram, and mixing by Dave Sperandio and Girard, OneVoice presents a mature and diverse album with Here to Stay.

Katy Perry's Wide Awake is a gentle, creative arrangement by Dietz that is different enough while still staying true to the original. The juxtaposition between Wide Awake and the track that follows, Elvis Presley's Suspicious Minds, is easily welcomed with Girard's haunting reinterpretation of the late '60s classic.

Tom Anderson's arrangement of The Rescues' Crazy Ever After combined with the talented trio of Wil Faulk, Daniel Schirmer, and Haley Gray perfectly captures the heartbreaking nature of the original.

The title track, Here to Stay, is an original written by female members of OneVoice and arranged for voices by Bram. Caroline Mohler delivers a fragile and pure performance, tying together the theme of unrequited love that permeates the album.

OneVoice director and choral composer J.D. Frizzell's adaption of Evanescence's My Immortal is powerful and textured, filled with emotional intensity.

Don't You Worry Child features Boston-based vocal band Overboard. Dietz's arrangement, Girard's mixing, and the talented voices of Overboard combined with OneVoice makes this one of the strongest tracks on the album.

Here to Stay finishes with a hopeful version of JoJo's Just A Dream that ties the entire album together.

As a sophomore release from a high school group, this album fits perfectly amongst some of my favorite co-ed college albums! If you haven't checked it out already, I highly suggest purchasing Here to Stay.

Here To Stay is available on Loudr.