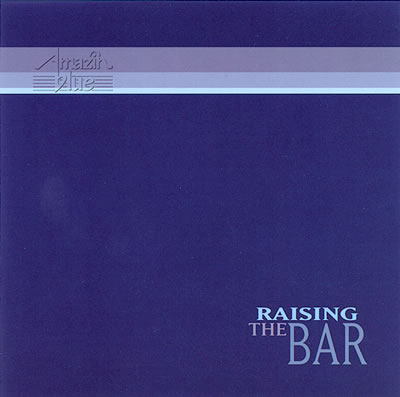 This is a marvelous album. Amazin' Blue lives up to its name and then some.

Where to begin? Although some tracks don't do as well as others, some soloists sing with marginally less aplomb, and the percussion throughout is not quite up to the same speed as the rest — although all this is true, the songs, the arrangements, the interpretations, and the emotions all work.

One of my favorite things is how the group can take standards or well-known songs and make them fully their own. How easy would it have been for the soloist on Sunny Came Home to sing like Shawn Colvin, and how fantastic is it that she does not? Equally nuanced is the solo on Criminal. This is the interpretive aspect of a cappella too often lacking from other albums, which too often end up merely collections of imitations. This disc, by contrast, sounds to me like real work.

Some things I would look forward to next time around: the same smooth studio work, the same complexity of arrangement, the same rock-solid bass throughout. Some things I would have the group work on, were it my prerogative: more practiced percussion ("ch" shouldn't be the only high-toned sound available for a group this good and this big); more matching of intonation in the background voices on complex pieces (vocal guitars will almost never sound like real guitars, but they should sound similar to each other).

Top Five Things a College Group Must Do To Be As Damn Good As Amazin' Blue (Or At Least Make a Comparable Album):

SING OUT
These kids are throwing their voices out. They are breathing from their diaphragms, dropping their jaws, and singing to the back of the auditorium. All of them. A dozen college-age singers wailing on some modern rock hit should have some oomph — it's so rare, and so refreshing to hear it here.
FIND A BITCHIN' ENGINEER
The number one factor determining the quality of an album is the engineer. Lousy singers saved by savvy producers are the rule in pop music, and a cappella is no different. Amazin' Blue thanked their engineer first in the booklet, and he deserved it.
GET SOLOISTS THAT RULE
Who listens to all that oo-wa crap in the background anyway? No one. I mean, do you? Or at least before you started singing in an a cappella group and caught yourself singing accompaniment to your favorite song with nonsense syllables? Soloists make the album. So when you're picking soloists, skip the arranger, the girl who suggested the song, the guy who can imitate the real guy, and everyone else who can't make it into a super sexy piece of musical pie. I don't think I own another college a cappella CD with Amazin' Blue's consistency of soloists.
PICK GOOD REPERTOIRE
These kids have Phish's catchiest song, a Phil Collins '80s anthem, and a song by some guy named Hepcat that ROCKS. Amazingly, the album has an odd sense of unity despite the variety.
DO SONGS WELL THAT NO ONE ELSE PULLS OFF
I mean, everyone covers Jamiroquai and Dave Matthews, but how many groups make it work? And Lord knows I've heard every girl in America who fancies herself a Tori Amos sound-a-like take a crack at Cornflake Girl. But Amazin' Blue one-ups everyone with kick-ass renditions of Cosmic Girl, Warehouse, and Talula. I want to Napsterize all three and spread the a cappella gospel to unsuspecting music pirates. Good job, Amazin' Blue. Send me another copy for my mom.

After hearing their many fabulous appearances on BOCA, I was highly anticipating Amazin' Blue's latest album. Even its name raised my expectations. Raising the Bar would surely show me some raising of the bar. Unfortunately, this did not really happen.

The album often sounds rough and unmixed. The faster songs tend to have harsh and busy backgrounds. Some careful mixing would be a great improvement. The tuning is sometimes a bit off in both backgrounds and solos. Again, studio time and a good engineer are the two most important things in recording. Like the $1.99 Ultimate Cheeseburger Meaty Cheesy Boys commercial, a good engineer can work magic.

The male soloists contribute to the rough sound of the album, while the female ones sound quite trained (and underused). The gal on Ghost does a great job suppressing her natural vibrato for a more raw, Indigo Girls sound. My favorite soloist by far was Anna Gleichauf on Spirit Voices. Her unique and appealing voice are what, for me, make the song.

The percussion on the album is great, and it is used very well. The arranging is quite good also, though I would suggest more harmonious vowel sounds in the more upbeat songs.

On the whole, this is a good album, and deserving of the BOCA nod for Millennium (though I would have picked Spirit Voices). With a little more studio time to fix tuning problems and properly mix the album, watch out for Amazin' Blue.

The University of Michigan's Amazin' Blue has assembled a collection of sixteen songs that does raise the bar. The 70+ minutes cover songs by top artists from the '90s and reach back to 1985 for a Phil Collins hit. They demonstrate that they have the ability to musically create any mood they want.

As you begin listening to the album, one thing becomes very apparent: the high quality of the vocalists. Soloists are allowed to move the music where they feel it goes. Noah Miller on Think' Bout That (James Taylor) and Maddy Wyatt on Sunny Came Home (Shawn Colvin) both demonstrate that they have a sensitivity for the intent of the tunes. They understand what the songs need and they have the talent to accomplish it. On Ghost (Indigo Girls) the duet of Maddy Wyatt and Neely O'Brien weaves two voices together and exposes the real emotional level of this song.

Finally, the vocal percussionists are amazing. On Spirit Voices (Paul Simon) they fill in with the standard percussive sounds. Then they add the sounds of birds and jungle animals. They even succeed at creating the sound of rain sticks. Like the background singers, they complement the vocalists that are in the "front" of the band.

There are a couple of places that don't come up to the level of the rest of the album. Don't Lose My Number and Cosmic Girl both have holes in the presentation, including loss of tonal centers. Based on how well Amazin' Blue executes on the other cuts, I suspect that the arrangements could be the culprits. Even with the problems, both of these songs still have some good points. All is not lost.

When I received the CD to review it, I noticed that there were no liner notes. I e-mailed the group's contact, David Reiser, to see if they had produced any. No, they hadn't, but there were definitely stories about the CD that were worth repeating. I suggested that Amazin' Blue post the stories on their website. He thought that that was an idea worth pursuing, so check out their site to see if they've added them. David shared this one with me:

On Goodbye Street we all got together in the studio and threw a quick mini-party which is what you hear during the bridge of that song. You hear people talking and laughing and eventually everyone breaks down into hysteria. Good fun.

This is a very good disc. It works as an album for close listening, yet it also works as background music. I recommend it.

Naming your CD "Raising the Bar" is an undeniably risky thing, should the end product not deliver on the title's promise. For a group like University of Michigan Amazin' Blue, which has nabbed numerous appearances on the BOCA CDs (including an amazing cover of the Cars' Drive) and CARA nominations, it's even more risky.

Nevertheless, with only a few bumpy spots, Raising the Bar delivers. The disc kicks off with a phenomenal, energetic arrangement of Robbie William's Millennium, a choice which could easily have flopped in less capable hands. Unfortunately, this great track is followed by four mellow, fairly indistinguishable tracks with little of the energy and creativity that mark the first song.

Don't get me wrong. These four tracks, the weakest of the album, for the most part still have stronger arrangements, production, and solos than the best work of many college groups out there. That being said, any collegiate a cappella CD with a playlist lasting over an hour can usually stand to lose some dead weight.

Fortunately, the album steadily draws the listener back in with creative takes on songs I've heard a cappella before (Criminal, Ghost), hitting full stride with Peter Gabriel's Come Talk to Me; this version puts out a ferocious energy and intensity that leaves the original in its dust. Additionally, the arrangers wisely mix up their conventional choices with some riskier tracks to great success, particularly with their takes on Tori Amos and Jamiroquai. While some of the more daring moves didn't necessarily connect as solidly as other efforts (seven minutes of Dave Matthews' Warehouse?), it's great to see a group willing to go beyond the Top 40 playlist off their local radio station.

One of the things I particularly enjoyed about the disc was the uncanny ability of Amazin' Blue's soloists to imitate elements of the original artists' performances (particularly Tori and Jamiroquai again) while making the solos their own. It's a hard line to walk, and these kids do it better than most. The arranging was strong across the board and supported by top-notch production. I wouldn't be surprised to see yet another Amazin' Blue track gracing the next BOCA CD, and deservedly so. Even with its flaws, Raising the Bar is an excellent piece of work.