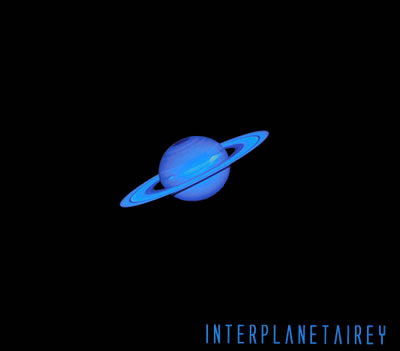 Interplanetairey is one of my favorite collegiate a cappella albums to date. Although not every track is outstanding, some by a fairly wide margin (King Kong...), the album as a whole is electric. The clean, smooth sound that these guys produce is just great to hear, track after track.

That sound is very reminiscent of the Tufts Beelzeubs from a few years back: dazzling energy, solid chords, screamingly high but still soft-spoken falsettos. This is the cool sound that drew me to a cappella in the first place. As a child of the late '80s and early '90s, it is this energetic covering of complex, shining music that more than anything else is what collegiate a cappella is about.

So, on the one hand, Interplanetairey is reminiscent for me; this is what I first thought a cappella was supposed to sound like. On the other hand, the group and its music are not stuck in the '80s covers rut. Although much of the music is late '80s/early '90s in origin, the group manages to give most of the tracks a fresh sound, combining complex arrangements with vocal style for a unique interpretation almost every time. Ordinary World is faithful but interesting, Secret Garden is a little more elaborate than the mellow Springsteen original, and Sweet Child O' Mine is as rocking as college can get — thankfully in its own way, not seeking to over-emulate Sir Axl.

Good stuff, beginning to end. "Just when I thought I was out, they pull me back in."

I like the Dartmouth Aires' approach to a cappella so much. They have embraced the late-'90s style of full, complex pop arrangements, but don't make the mistake of adding so much clutter that the sound of human voices is lost. They sound like they're having fun, even in block. Solid percussionists keep the energy up throughout.

So why the mediocre overall score for Interplanetairey? Two big problems: soloists and tuning. The Aires tackle a lot of songs that are just plain hard to sing. There's a reason why Sting, Peter Gabriel, and Freddie Mercury vocals are often covered by women in mixed groups. Some of the Aires' soloists are pushing beyond the natural bounds of their voices, with hoarse and hollow results. Some of the best voices in the group (the soloists on Freedom and Don't You) mar otherwise terrific tracks with crisp, speech-class diction.

Tuning is an equally big problem. The album begins with such promise, but lazy chords on most of the rest forced my scores down. I couldn't figure out why some songs were rendered so much better than others. Sweet Child O' Mine, a challenging arrangement, sounds great, but the simpler chords of Under Pressure and Better Man go sour.

Given this pattern, the last track came as a shock. I've been waiting for years to hear a track like Dartmouth Undying. You might not think it breaks much musical ground, but this is the only nicely tuned college hymn I've ever heard on a collegiate a cappella album. Let's hope other groups are inspired to pay attention in rehearsal when four-part glees are on the agenda. I gave the song a 5 for its unprecedented originality, because the Aires seem to be the only group who have thought of doing this.

The Aires also include a Dartmouth drinking song, A Son of A Gun, for which I admire their chutzpah. This is the first time I've been asked to judge a dis of my alma mater. I liked it, although my favorite Dartmouth song is the one about Dartmouth graduates having "the granite of New Hampshire in their muscles and their brains".

In sum, the Aires are doing fine. They've got plenty to be proud of, and plenty to work on in the future.

Do you know how much I would have LOVED to give this album a 5 for its overall score? So much. Sooooo much. The Aires have made HUGE strides since their last CD, Airemail. And Interplanetairey is so close to great.

The CD case and insert themselves make it BY FAR the best looking a cappella CD I have ever seen. The graphics are just sweet (we're talking sweeeeeeet, not oh, how sweet); the entire layout works well. And the Aires' backgrounds are so good. They play with textures beautifully throughout all of the arrangements, and they do it so well. The tuning is almost always on (except for some major issues on Better Man) and their sound is full and rich, with a deep bass and well-developed falsetto.

Beyond the great arrangements and the solid performances, their use of the studio is awesome. The effects used are by no means subtle, but are always appropriate and super-duper effective. They use different effects all over the place, making such a great overall sound that I sometimes can't help but pump up the volume (way up) and drown in the neat sounds. Steam is one of the best-sounding songs I've heard, in large part due to how artistically and appropriately they messed with it in the shop.

There's good humor on this album, too. When I last saw the Aires perform, they did Secret Garden complete with the Jerry Maguire dialogue. I got to that track and was disappointed to find that that bit wasn't there. And then I hit the end of the song, and found myself face to face with Bob, the Rhyming Pirate, who still cracks me up. It's out of the blue, and perfect. That, the odd King Kong, and the fun Son of a Gun keep the CD light and enjoyable without being annoying or distracting.

So why a 4 and not a 5? Unfortunately, most of the soloists just can't rise to the level of the backgrounds. Granted, they're trying to do REALLY tough solos (Sting, Peter Gabriel, Queen, Guns N' Roses, and so on), but they just don't pull them off well enough. There are a few who do great jobs (most notably Adam Ballard on Come Undone, Derek Senft on Take It Back, and Bjorn Erickson on Secret Garden), but for the most part the solos are consistently the weakest parts of the tracks. And it's sad. With top-rate soloists, this CD would be all-around unbelievable.

I still listen to the CD a whole lot. Steam, Take it Back, and Come Undone are some of the best tracks I've heard in a good while. The CD rules, and once they learn to focus on improving their soloists, and fix up a couple of their slips, these guys will kick serious ass. No diggity.

Interplanetairey left me kind of scratching my head, even after listening to it twice. I have had the pleasure of seeing the Aires in performance more than once, and they are extremely fun and energetic. However, a few unfortunate artistic choices and pitch problems made what could have been a really good CD into something better suited to the Aires' family and friends.

You can't really discuss Interplanetairey without mentioning Adam "oDo" Ballard, whose presence pretty much dominates the album (he provides ten out of the fifteen arrangements, three solos, and mixed it as well). And generally, oDo delivers; his arrangements are effectively layered and interesting to listen to. If I ever decide to arrange Duran Duran, I'll have to get some tips: his takes on Ordinary World and Come Undone are among the best I've heard of these often badly done hits. While hitting the typical song list of a guys' a cappella group (Sting, Wicked Game), he also surprised me with a Pink Floyd track and a somewhat cheesy but endearing Wham! track. Oh, and his version of Peter Gabriel's Steam (both solo and arrangement) ROCKS.

In general, the Aires are fairly tight, with decent pitch and blend, and execute oDo's rhythmic arrangements well. However, every so often their tuning goes disastrously off (Secret Garden; the opening chorus of Better Man), and it really wrecks the overall effect of the disc. A bigger problem is that the soloists in general seem to have a problem finding the groove of the songs. Many particularly strong blocks became disappointing tracks when a somewhat dispassionate solo was added on top. You almost could imagine some poor guy in a recording studio with a metronome next to him. The balance between precision and passion is particularly difficult to achieve with solo recording, but from what I've seen live, I think the Aires can do better. Some of the songs could also use a bit better cutting as well; songs over five minutes generally have a hard time keeping the listener's attention.

My biggest problem with Interplanetairey was the obnoxious secret tracks. Actually, they weren't even secret tracks, which could at least be fast forwarded or programmed out of the play list, but weird, supposedly comedic little interludes tagged at the ends of songs, often without any real pause between the actual song and the comedy routine. The best example here would be the random ditty about Bob the Rhyming Pirate tagged on the end of Secret Garden, effectively ruining any emotion or mood achieved by the song. The wave sounds leading into Wicked Game could have been really neat, even with the Aires' impressions of whale noises; but as the fun got out of hand, they pretty much shot themselves in the foot leading into one of the stronger tracks on the disc.

There are a lot of great things about Interplanetairey, but to produce a top-notch piece of work, the Aires might want to try channeling all that comedic energy into their solos. Leave the laugh tracks and the Dartmouth traditionals for another time, or at least the end of the CD.