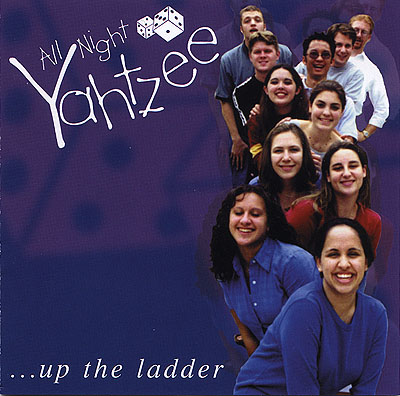 As far as this reviewer is concerned, Up the Ladder is a fairly mixed bag, solidly stitched but not outrageously interesting. It's a paradox exemplified by the contrast between album title and group name: the inspired lunacy of All-Night Yahtzee threatens to outshine all subsequent titling attempts. In the same way, the glorious first a cappella rendition of a song outshines most subsequent covers, despite the covers' merits.

In this way, the group does best when they treat the a cappella of yesteryear, far enough removed from the contemporary consciousness to allow them some breathing room; I liked Walk Like a Man and the title track. At the same time, though, some classics are simply too classically done; Only You is a bit empty no matter how it's sung. On the other hand, recent music and even more the covers of contemporary a cappella are less successful; I start to think that no one but Rockapella should sing Rockapella songs.

Now, the attentive reader will have noticed that not all of my categories are internally self-consistent, showing instead a fair degree of overlap. That's the paradox that this group presents — good and not so good mixed into everything. The flavor of this album is as incongruous as the elements of the group name. I can't say if that's the group's consistent groove, but it stands out here.

All in all, this disc could be interesting for newbies, and certainly charming for friends and fans.

Listening to All-Night Yahtzee's Up the Ladder will give a nostalgic thrill to any former "founding members" of college a cappella groups. All of the hallmarks of the a cappella start-up can be heard here: arrangements begged, borrowed, and stolen; a variety of sometimes conflicting vocal abilities and styles; and the liner-note dominance of one or two members as arrangers, percussionists, and soloists.

Add the non-functioning website to the list, and you have a perfect specimen of one of the hundreds of groups that pop up on college campuses every year. And while most disappear in a few years, All-Night Yahtzee shows more than enough promise on their first album to last a good while longer.

Because it's a first effort, the track list can hardly be faulted for being such a melting pot of arranging styles and traditions: some high-school-era Hal Leonard/Pepper hits, the King's Singers, a few by CASA's Deke Sharon & Anne Raugh, some BOCA hits (including the UNC Loreleis' Dreams, ably adapted to All-Night Yahtzee's mixed voices), and finally, a handful of very impressive member-arranged tunes. I didn't mind the mix so much. Although some choices smack of desperation and availability, arrangements are tough to come by for the novice director, so all is forgiven.

And it helps that there is so much potential here. Brian Haverkate has been doing his a cappella homework, turning out arrangements that would be at home on any BOCA disc. And while tuning and rhythm for the group wobble in and out, strong soloists for the most part hold steady.

Although All-Night Yahtzee has a ways to go, I give the group full credit for getting this solid album off the ground.

All-Night Yahtzee is a collegiate group from Florida State University. I have a sneaking suspicion that this album is not really indicative of the talents of this group.

As the ratings indicate, this album was average in every respect. The voices are quite pleasant...one or two are actually lovely, like the soprano soloist in Over the Rainbow, but on the whole, the soloists just don't quite achieve what they are attempting.

Tuning problems crop up frequently, and one of the male leads is often a little flat. Sometimes the singers don't quite make some of the more acrobatic phrases, and sound a little strained on the higher notes. The female soloists in this group are generally of better quality than the male. The bass sound comes out a little forced...they sound like they're trying too hard on occasion. This is particularly noticeable in Good Old A Cappella.

Most of the arrangements are quite good, but better balance and synchronisation within the group would show these arrangements off better. The group might like to look at re-chording some of Walk Like a Man, which doesn't quite work in a couple of spots.

Well and away the best track on this album is And So It Goes, a King's Singers arrangement of the Billy Joel number. The voices all sing together, instead of soloists with backing group, and this is a much more together piece.

I also enjoyed Over the Rainbow and Dreams. My Home, a Rockapella original and the last track on the album, is a great, easy listening number.

I felt the major problem with this album was a lack of energy. You could forgive much of the above if the sound was fun and energised. However, I had an overall feeling that the singers were being careful, instead of singing with freedom, colour, and flow. They have placed their voices on the album, but not their souls, and you can hear it.

As I said, I think that this group is probably very good and a lot of fun live. Next time they need to take that into the recording studio with them.

CDs may be ordered for $13 each from All-Night Yahtzee's website.