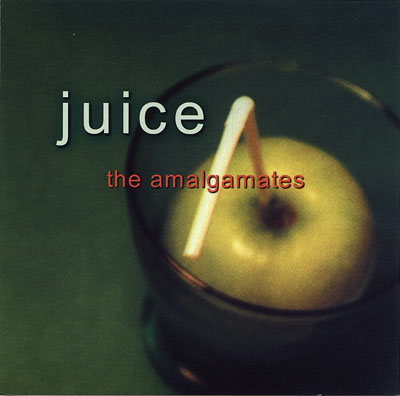 Contemporary college a cappella started when college kids in the '80s became obsessed with singing popular songs from the '60s, with a few sixtified current hits thrown in.

So I think it's only fitting that classic contemporary a cappella has evolved into cool kids from the 2000s singing straight-faced '80s hits with a smattering of retrofitted modern rock. The Amalgamates could be poster children for this trend. Their album opens with a Whitney Houston song that transported me instantly into a vision of leg warmers, eye shadow and big hair.

The Eagles may as well be an '80s band, certainly for a cappella purposes. Seal isn't an '80s act, but he might as well have been. And in the Amalgamates' hands, Fly From Heaven turns into a beautiful tune reminiscent of Marc Cohn, rather than an anthem by the uberboring, '90s-esque Toad the Wet Sprocket. In case you had any lingering doubts about Juice, it's got a cover of Alice Cooper's Poison on it. I rest my case.

Oh, but there is some stellar solo work on this album. The best track for my money is Waiting in Vain, handled by the golden voice of Rachel Friendly. Courtney Simson and Colin Simson (relations, anyone?) sound great, and Mike Neary sounds like he's spent way too much time figuring how to get those Don Henley flourishes into his voice. And I mean that as a compliment.

This is a great album. It is not based on fancy studio tricks or self-conscious, ironically hip modern anthems. Just some honest, heartfelt singing handled with a polish and sincerity that never seems to go out of style.

It must suck being Lou Reed. I can tell you right now that his album New York is a masterpiece, a Lou Reed album for the masses, a Lou Reed album for people who aren't normally Lou Reed fans. But you still won't buy it, because it isn't the one with Take a Walk on the Wild Side on it. Sometimes it's hard to live down your past successes.

The first time I listened to the Amalgamates' new album Juice, it didn't particularly grab my attention. At first, I chalked the problem up to the fact that it didn't have any songs that duplicated the excitement of their version of Man in the Mirror. Then I thought it was that this album didn't have the stunning deep and well-deployed bass sections that distinguished past albums by the 'Mates. But neither of those assessments is quite right. Their cover of Paula Cole's I Believe in Love shoots down both of those theories. While Man in the Mirror gets its power by building to a climactic crescendo, Larry Kwon's arrangement of I Believe in Love gets an equally potent charge by beautifully deconstructing itself at the end. And when it does break down into its component parts, it reveals a delectable bass line.

So why, I kept asking myself, was I not instantly engaged the first time I heard this wonderful album that I've since enjoyed listening to for hours on end? I think it's simply that it doesn't pass the Snoopy test. The Snoopy test is a very scientific set of criteria that determines whether a song encourages you to do the dance Snoopy does. (It involves lots of bouncing up and down excitedly while happily bouncing your head from side to side.) I think past Mates efforts have had track lists that were a bit giddier than the one for Juice, and I think that led me to expect something that this album doesn't try to deliver.

Not that this album is dreary by any stretch of the imagination. There are plenty of upbeat songs, and all of the material has a warm glow that has been missing from way too many collegiate albums of late. (I have nothing against groups singing downbeat songs, but some of the performances on other discs that have come out recently are just plain drab!) Juice is an album full of highlights. Ladyfingers is a blast, plain and simple. Waiting in Vain hits all the right emotional marks. The solo on Hot Stuff rips. Don't Cry is 100 percent effective, something you can't say of many (if any other) Seal covers. Poison by Alice Cooper — yes, Alice Cooper — turns out to be a fun '80s-influenced pop/rock number. Hell, the Amalgamates even manage to make the Eagles sound good on Love Will Keep Us Alive. Soloist Mike Neary is a lot better than Don Henley. (That may not sound like a big compliment if you find Don Henley as dull as I do, but I meant it in the best possible way. Mike is good. Don is not.)

Most importantly, every song on the disc has big, beefy sound. The percentage of collegiate discs out there that could best be classified as "wuss-appella" used to be a lot higher. A lot of groups fought that trend by trying to really ROCK. We used to think the best cure for wuss-appella was covering AC/DC. While that may work, a better antidote for wuss-appella is to have a full, rich sound like the Amalgamates do on Juice. It's a great album, and I highly recommend adding it to your collection. It may not be the album with their trademark song on it, but it's easily the Amalgamates' best album to date. Order one now. And would it kill you to pick up a copy of New York while you're at it?

If you like a cappella, particularly coed pop, buy this CD. You will like it. I promise. The new album from the Amalgamates is great example of a disc being a bit more than the sum of its tracks. There is a lot of really, really solid work and a few fantastic tracks, which add up to a really enjoyable performance overall. Tufts groups seem to have a very distinctive energetic and edgy approach, but the Amalgamates have a really warm, round sound that I have not heard often from the Jills or Bubs, and lends itself well to their repertoire.

The important score to remember here is repeat listenability, and I would have given a higher score than 5 if I could have. Juice was tested by fire when I brought it along on a ten-day trip, yet every time I listened to it, I found new things to smile at in the tracks I liked, and things to like about the tracks I wasn't immediately crazy about. As my scores reflect, Juice was a healthy mix of really solid, fun tracks and drop-your-jaw awesome ones. But because some of the drop-your-jaw tracks were so amazing and really deserved, say, a 7 on a 1 to 5 scale, the overall effect of the disc is far greater than it might have been; I would say there are at least four, if not more, tracks that might have landed on BOCA if they had come from any other group (tracks 1, 2, 8, and 12 in my estimation). Also, some of the tracks that might have gotten much lower scores, had they been done by another group (Hot Stuff, Ladyfingers), become winners with great solos and strong arrangements. Tuning was strong for the most part, and the few errors I heard were overshadowed by the 'Mates' amazing blend and great energy.

Soloists are strong across the board, although the blendy, warm sound which makes the Amalgamates' male blocks so great sometimes fails them in the energy and edge that would make Poison or Mysterious Ways hit the next level. Kudos to the women for providing really varied performances on really different songs, making the disc as a whole feel nicely eclectic. Another thing to notice about Juice is that every one of the twelve tracks had a different soloist, an impressive feat emphasizing the general capability of the Amalgamates as opposed to a few superstars. That being said, Becky Rubin's bust-out version of I'm Your Baby Tonight more than puts Whitney to shame, and should earn her some CARA recognition if there's justice out there. I also particularly liked Colin Simson's turn on Fly From Heaven, though as I said before, I could really keep listing the strong solos for another paragraph if I had room and you had the attention span.

College groups looking for a lesson should turn here: The Amalgamates really know how to turn out consistently strong CDs. Twelve tracks of a really eclectic pop mix is just about right for keeping a listener's attention, and Juice ends just on the right note, satisfying and leaving you wanting slightly more. The production does a great job of highlighting the nuances of the 'Mates' textured and complex arrangements, while never grabbing the spotlight from the singers themselves, who yet again prove that Tufts a cappella is a force to be reckoned with.

Juice is available online from Mainely A Cappella and Collegiate-Acappella. To buy it straight from The Amalgamates, send $16 per CD to: