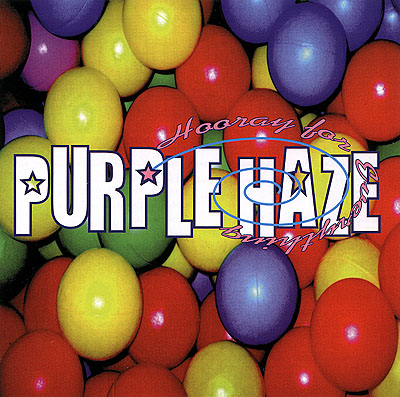 Let's start with the good:

The energy that Purple Haze performs with is great. Groups often lose all interest in everything that they're doing as soon as they walk into the studio, but that's definitely not the problem here. If there is this much energy on a CD, I'd love to see them live.

Also, the soloists were excellent (hence the excellent rating). For example, when you listen to Strangers in a Car, the first thing that jumps out is the simplicity of the arrangement. I was tempted to give it a lower rating, but the soloist brought it where it needed to be. He took a lazy arrangement and turned it into a good song. The majority of the other soloists did the same thing with their songs as well.

For the most part, this group has a great ear for tuning. The only slip that was obvious was in Rain, but the rest of the album has just the right tuning.

Now for the things to work on (all college groups, pay attention):

I was confused as to where the group was going with this album. They attempted to make a professional-sounding recording, with an obvious use of the studio, and then turned around and did collegiate things with it. The most obvious is the hidden track. After the last song ends, Purple Haze treats its fans to five minutes of silence, followed by three guys screwing around in the studio. Why? If you're going for a larger audience, don't have private jokes on your disc.

Also, the arrangements were highly inconsistent. Some were great, filled with nice syllables, complete chords, and real innovation. Some were simple three-note chord, "do-ba" arrangements. I thought maybe it was because of different arrangers, but when I checked there were inconsistencies throughout each arranger's work. I'll attribute this to learning how to arrange (I've gone through the same process), but on an album it makes some songs sound like they're of lesser quality.

Track 8: Bills, Bills, Bills. It's a good arrangement, but I could not hear the solo. I was totally transfixed by the drums. I would love to see them do this live, just for the sheer fact that I don't think they can do it. I'd love for them to prove me wrong. The vocal percussion on this song is so complex, and it's done by one person. In the studio, this is possible, and believe me, you can hear the studio at work here. Live, this is impossible for one person. This adds to my confusion of what the group was trying to do. Is it a professional studio recording, or an honest collegiate recording?

And finally, Dave Matthews. The version of Two Step included on this album is the perfect example of what happens when groups try to cover Dave Matthews. The soloist tried so hard to copy his voice that it ends up sounding like a parody instead of a song. This is not the first time I've heard this problem on an a cappella album, but it is the first time I've reviewed it, so I will air my grievances here. I'd rather hear someone do a song like this and sound like himself.

Well, thank you, Purple Haze, for giving us an album with much quality work, but with some mistakes to learn from as well. There is great potential with this group, and I look forward to what they do in the future.

It's no big secret that appearances on BOCA, CARA nominations, or even favorable reviews from us here at RARB don't always reflect the actual musical quality of a group.

After all, we're evaluating recordings, and as anyone who's ever set foot inside a recording studio (and seen an experienced engineer or producer work their magic) well knows, when it comes to recording, ANYTHING is possible.

It seems that word has gotten out in this regard, and every year a cappella albums are becoming more and more produced, especially at the college level. Indeed, this year's Best of College A Cappella (BOCA), for the first time, sounds like every track has been put through the studio wringer, every one coming off rich, polished, and virtually radio-ready. Even the standards (Happy Together) shun the live-sounding, two-track recordings that typify those types of songs and go for broke with reverb, multi-tracking, and sundry other studio goodies.

Thus, as college a cappella albums sound better and better, they're becoming harder to compare. The tuning/blend/good soloist checklist hardly holds the weight it used to, what with ProTools and its multiple-take magic. Now every group sounds like the best ones out there, first-year groups luck out with a gifted engineer and end up on BOCA, and big-city groups with access to quality facilities sound 100 times better on tape than their more-talented college-town counterparts.

And so we come to Purple Haze's Hooray for Everything.

As a recording, it is top-notch, produced by my esteemed RARB colleague Freddie Feldman. Freddie is one of a handful of producers nationwide who are making a name for themselves as a cappella recording specialists. He skillfully balances the background, soloists, and percussion, and keeps studio effects to a tasteful minimum.

The group, too, is unquestionably good. Nice dynamics and delicate sopranos on Come Undone, beautiful blend on Madonna's Rain, a hysterically good Bills, Bills, Bills — there's so much to like.

And Purple Haze chose wisely when it came to repertoire — an intelligent selection of songs keeps the album moving and interesting. I was also pleased to see that they chose not to use soloists on Rain and Bills, Bills, Bills. Pop music is a soloist's medium, but nonetheless it's nice to see the odd arrangement that doesn't put one person front and center.

There's no doubt that this is one of the best albums of the year, with a well-earned CARA nomination to its credit.

But next time I would invite Purple Haze to be less cautious. This album makes me feel like they're good enough to make an award-winning album with a good engineer, but really, that's not all that good. Next time, Purple Haze, make us sure that you would be just as good outside the studio. Maybe a live track, sure, but you know what would be even better? More adventurous choices and arrangements like Bills, Bills, Bills, more dynamics like Come Undone, more love and heart and everything else that can get lost in a good mix if you're not careful. Go for broke, and the results could be spectacular.

Every year, there's at least one track on BOCA whose main role seems to be making the other songs sound better by comparison. In 2000, that track was And She Was by the Northwestern University Purple Haze.

So I didn't exactly shout "Hooray for everything!" when I was assigned to review Purple Haze's sophomore effort. I had no idea it was going to be a consistent, enjoyable, and generally commendable disc. I still think And She Was was completely outclassed by its BOCA neighbors. But I have to hand it to CASA for somehow sniffing out the great potential that's realized on this album.

With one exception, nothing Purple Haze does is spectacular, but it's all pleasant, and that alone makes the album unusual. Maintaining steady quality is just beyond the reach of most college groups. Every track on Hooray for Everything has a few flaws (breathy sops, tuning flaws, and uninspiring soloists being the main culprits) but also many strengths. Most of Purple Haze's arrangements are fun to listen to and suit the group's voices well. The set list includes several songs that I never realized would sound this good a cappella.

So what's that one spectacular exception? The liner notes don't provide the members' graduation years, but here's hoping that resident diva Erika DeShay has a couple of albums left in her. She doesn't need an a cappella group to sing behind her; she needs the Pips. Like several of her album-mates, she is sadly quiet compared to the backgrounds, a problem that can be easily fixed on the next album.

Hooray for Everything isn't a must-buy, but if you like the songs on the list, it's worth a listen. One caveat: the album features perhaps the most agonizingly over-the-top example of the you-had-to-be-there hidden track that I've heard during my RARB career. At the end of Wide Open Spaces, just hit stop. Trust me. You'll be glad you did.

This album can be ordered from the Purple Haze web site.