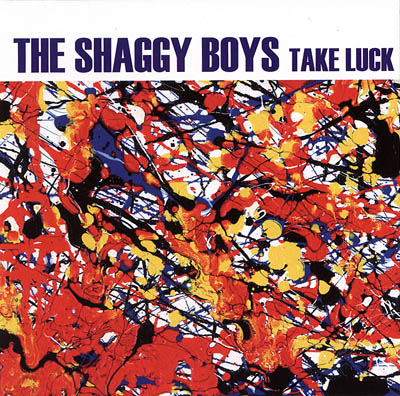 Take Luck is unbelievable! It has fast become one of my favorite a cappella albums. It has memorable songs and arrangements, tons of energy, excellent soloists, and perfect sound production. What more can I say?

These guys really know how to sing. Each voice is tuned perfectly to the others. While I understand that pitch problems can easily be fixed in the studio (which I'm sure was used on this recording), the singers still need to be competent. The Shaggy Boys are more than competent in this aspect. Not only are the backgrounds right on, but they're filled with energy as well. Too often RARB gets CDs where the soloist is working really hard to make the song great, but the background parts just sound bored with what they're doing. I guess it's understandable (how much fun can you really have holding an /oo/ for four measures?), but that's not the case here. The background parts know that they're just as important as the solo in making these songs.

There is not a truly weak selection on this album either. Each track gives you the same quality of solo, energy, production, and overall result. An album of such high quality speaks to endless hours in both rehearsal and the studio.

If I had to give any criticism it would be with the inclusion of the last track, Shagabego Groove. It's a live version of The Shaggy Boys' "theme song", in which they regale us about their road trips. While occasionally funny, I believe that it would have a greater effect in person. CDs are really impersonal, and for a song like this to work, you need the personal connection.

I could go on gushing about The Shaggy Boys for another few pages, but I think you get the idea. Get this album! It is a must have for any contemporary a cappella collection. Way to go, boys!

The words "Iowa State University" don't appear anywhere on the cover of Take Luck. Seven of the eleven tracks are originals. The group has only seven members. In other words, if you came across Take Luck in a record store (and if there were musical justice in this world, you would), you might be fooled into thinking that The Shaggy Boys were a professional group.

What's remarkable is that if you took home that copy of Take Luck and gave it a spin, nothing on the CD would change your mind. The well-deserved inclusion of Owner of a Lonely Heart on BOCA 2001 is just about the only giveaway that these singer/songwriters are technically just a bunch of college kids from Iowa. If The Shaggy Boys aren't making a living from their infectious pop originals and creative covers, they ought to be.

I can't say enough about the originals on this album. They aren't at the level of Ball in the House or Five O'Clock Shadow, but they're in the same ballpark. On the next album, guys, I want more songs by Brad Seidenfeld! If Eleven Months is a good indicator of his songwriting abilities, he's got a bright future ahead of him. Matt Anthoney's compositions are terrific, too, especially Exit Sign. His wilder experiments don't always work (I'm not sure where he was going with Moonboots), and his lyrics don't yet have the sophistication of his harmonies (Strawberries seems a little forced). Nevertheless, this is phenomenal work for an artist his age.

The album isn't flawless. During the breakdown at the end of Steal My Kisses, the sound gets muddy and the block's vowels are a bit stilted. On some occasions, the VP, block, and solo seem ever so slightly out of line with one another. The production, while generally solid, does not sound as professional as the arrangements, tuning, and blend. But I'm nit-picking; if Take Luck can be considered a college album, it's one of the best I've ever heard.

Shagabego Groove confirms that The Shaggy Boys' skills aren't confined to the studio. The song is a well-written original in its own right, but the real magic is in the group's ability to perform it with driving spirit, in perfect tune, at the end of a set, during a road trip to another college, and come up with a track worthy of inclusion on a disc this strong. They claim their Winnebago is a piece of junk, and so it may be. But if this is what it sounds like inside, I can't think of a better way to ride.

The Shaggy Boys of Iowa State University have been around for several years. They placed 3rd in the 1998 Chicago Regional Harmony Sweeps and won best original song for Shagabego Groove. In 1999, they placed 3rd at the Iowa State Battle of the Bands, and Owner of a Lonely Heart (a YES cover) was selected for BOCA 2001. They also won three 2001 CARAs: "Best Collegiate Male Album", "Best Song", and (in a tie) "Best Arrangement". So far so good.

Take Luck justifies those accolades. With only a few exceptions, the CD shows that The Shaggy Boys are talented. They have three strong lead singers in Matt Anthoney, Brad Seidenfeld, and Devin Sires. Matt performs all the vocal percussion and wrote both words and music for over half of the songs. (Matt also answers the e-mail; he gets the nomination for "Busy Shaggy Boy".)

The album begins with New Place. It has good forward movement, and good energy. The tune could easily be on a top-40 playlist.

The second song, What Would You Say, continues the pattern of high energy and exceptional vocal percussion. At 2:08 into the song, the Boys break into distinct groups: percussion, rhythmic talking, and scat singing. It's a really neat section of independently different sounds that work together. Again, it sounds like a strong top-40 tune. If they can get attention from radio stations for this track, you might hear it over the airwaves.

The album continues with more of the same: strong singing, good arrangements, and a focus on what I think could be airplay. Exit Sign reminds me of the bubble gum tunes of the '60s and '70s. Eleven Months would appear to be aimed at an unsophisticated a cappella audience, one that dwells on teen love and teen love lost.

They follow the simple love-lost theme with It's Time, which is just as complex as Eleven Months is simple. Complex rhythms, complex harmonies, and complex emotional ideas make for a very good song.

At this point the quality of the CD drops. The next two songs suffer the fate of many "a ca-untuned-pella" songs. The fundamental requirement of accurate tuning is just not present. I guess missing pitches in only two out of eleven is not too bad.

The CARA-winning song Owner of a Lonely Heart lives up to its billing. Unlike many cover songs, the original is not the first thing you think of as you listen. They've done an excellent job in making this song their own. I particularly like the Jimi-Hendrix-style guitar riff. Nice touch, guys.

The last studio-produced song on the CD, Strawberries, has a chant-like motif. Twice, as I listened to it, I completely lost the fact that I was reviewing the song. I disappeared to somewhere else. Music should do just that — take the listener away — and this song does it.

The last tune is a live version of their signature, Shagabego Groove. In person, with all the visual stage energy, I am sure it rocks. On a CD, the aural presentation is interesting. You can feel the energy, but the singing doesn't approach what these guys have done on the rest of the CD.

As you can see from my numbers, there is very good singing on Take Luck. Should you buy it? Why not, especially if you like top-40 mixed with chant and absorbing songs.

To order, contact The Shaggy Boys by email at shaggyboys@hotmail.com or send $15 to