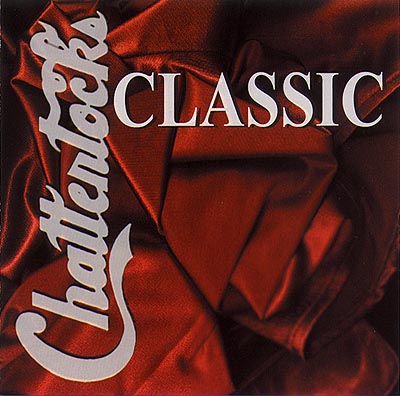 Classic, the new CD from The Chattertocks of Brown University, is not a step forward for the group. It may even be a small step back. Many of the songs on the album pale in comparison to the original recordings, to other covers by other college groups, and, most discouragingly, to the memory of past Chattertocks albums (see Aire and Take It to the Bridge). Where did the Chattertocks go wrong? That's the weird part. They don't go actually go wrong, they just don't go far enough right. There are some bad turns here and there, but on the whole The Chattertocks are still going in the right direction. They seem to know where they're going, but they never seem to get there. Despite having the basic tricks of the trade down pat, there still isn't anything on this album to keep you coming back for more.

I appreciate some of the interesting song choices The Chattertocks made: What You Wish For by Guster is a nice off-beat selection (although at this rate, by this time next year, they're going to be the most covered group around). The folk-rock group The Story may have been disbanded, but they still seem to be popular with college groups. Even so, So Much Mine is obscure enough to spice up the track list. The Chattertocks get extra points for not only digging Life is a Highway out of the vault, but also for transplanting the song into an all-female setting. It's an effective way for them to shake up their set list. Tony, by Patty Griffin, is an indisputably original song choice. The refreshingly direct lyrics and surprisingly catchy tune make Tony the one song that will really get inside your head and stay there for a while.

Some of the songs on the album build to a nice finish, but they lack the solid foundation that they need to sustain the first three minutes. Snow on the Sahara starts off with a nice, dreamy sound, but that sound quickly changes from "dreamy" to "dull". It feels like they're just marking time. It gets interesting at the very end when the arrangement tries some new tricks. Even though the end of the arrangement seems to involve fewer voices, it still sounds complete, whereas the rest of the arrangement feels like it's missing something.

The Diva Medley (featuring songs by Janet Jackson, En Vogue, and Salt N'Pepa) is an aimless collage, but The Chattertocks at least attack the material. The energy levels of the performances are way up. They aren't afraid to make fools of themselves, and as a result, some of the snippets in the medley have the fullest sounds on the album. Risa Puno, in particular, delivers a strong solo (and a nice rap, too). Carolyn Starrett's arrangement may have the same problem that most medleys do (namely, it's disjointed), but it does have a clever ending where all the songs suddenly fit together into one coherent whole. And, unlike a lot of medleys that pile on every song they can think of, Carolyn keeps it short.

Overall, Classic isn't as exciting as other Chattertocks albums, but aside from the low energy levels, other female groups looking for good role models could still learn a thing or two from the Tocks.

On Classic, The Chattertocks deliver average fare. To be specific, the tracks range from the low side of average to the low side of good. This isn't due to any terrible errors on their part. The score is just a marker of how far a cappella has come in the last decade. Making a CD stand out from the crowd takes more than pretty good soloists, mediocre production, so-so intonation, and singing "zere-dere-dere" with block-chord arranging. It's a good effort, but lots of groups do as well or better.

Again, that's not to say that this is a bad CD. The vocal percussion is better than one might expect from an all-female group. And quite a few tracks feature some shockingly bassy altos. Sultry or scary — you'll have to decide for yourself. I liked it. The low end creates a rich vocal texture. Thankfully, the arranging overall shies away from overly exposed upper ranges.

Particulars: the solos on If You Could Read My Mind and the ever-popular a cappella standard Thank You are quite good, bringing some excitement to the ballad-heavy roster. Miriam and Risa's VP on this track lays down a sweet groove.

My least favorite arrangement, certainly of the CD and quite possibly of the year, is the Diva Medley. This is an example of the whole being far less than the sum of its parts. Strong solos and strong sections of music are strung together in such an a-musical fashion that even the cute giggles at the end didn't wipe away my expression of disgust.

Endings are a conundrum for the Chattertocks. There is, of course no single right way to end a song, but the Chattertocks seem to stumble upon more than a few wrong ones. Even the tried and true swelling "ahhs" just seem to die out on this recording.

The production is pretty uneventful. Some subtle effects add oomph to the sound. There are, however, a few songs (such as Still) where the extremely high frequencies seem to have a kind of mild distortion, as if the aural exciter got applied a little haphazardly.

Pet peeve: according to the liner notes, My Funny Valentine is credited to "traditional", but Lorenz Hart wrote the lyrics and Richard Rodgers wrote the music. They weren't credited because the Chattertocks chose instead to credit the artists who sang the versions of the songs upon which the women based their arrangements. So, even though Emily Saliers alone wrote the music and lyrics for Virginia Woolf, the mention goes to The Indigo Girls. The Chattertocks are far from being the only offenders in this regard. Many a cappella groups fail to credit the very composers whose works they perform and record. I would suspect that many of these groups also do not pay the statutory license fees to record and distribute these works. Even fewer groups receive permission from the copyright holders to make the derivative works we call "arrangements". If a cappella groups, the beneficiaries of other's efforts, choose not to comply with the law, they should feel ethically obligated at least to give credit where credit is due. End of rant.

The Chattertocks' Classic is a nice, average album. Unfortunately, nice is a four-letter word.

One of the main problems facing all-female a cappella groups is an inability to achieve the depth of sound that the deeper, male voices provide. This is possibly The Chattertocks' greatest failing. A very weak lower end makes the bulk of their music sound sort of, well, empty. This was particularly obvious in Holding Out For a Hero, which in the original is a real thumper, but here was like a pale shadow of itself.

Their bass voices are actually quite accomplished...smooth and accurate, with a great sense of pulse; there is just not enough sound for good balance. In addition to this, the album is very 'same-ish', really needing more variety in the arrangements.

The individual voices are without exception lovely, with some clear classical influences. There is the occasional tuning error, but the backing vocals are pretty clean.

The tracks that came out best were the ones where the voices were singing together without so much counterpoint. The combined voices of the entire group gave a much fuller, richer sound. Case in point is My Funny Valentine, a traditional arrangement which really came through clearly and in balance — perhaps the only track on the album to do so.

I enjoyed If You Could Read My Mind, which had a lot more energy, a better sound, and a bit of 'oomph'. Billy Joel's Lullabye also had some nice moments.

My advice to next year's Chattertocks is to get out and recruit a few more female basses, restack some arrangements, and have another shot at a CD. There are no stinkers here, after all, just danger of popping off to sleep.