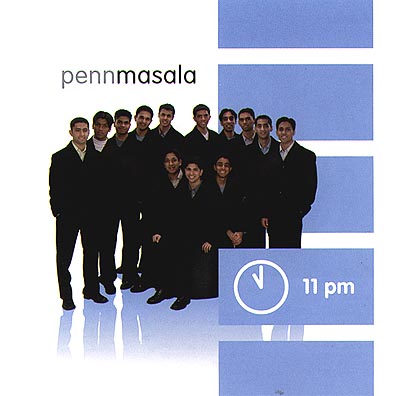 Let's practice our visualization skills. Visualize every single person in the world. Now count them. Too many people to count? Let's narrow it down a bit. Just imagine all of the men. That cuts the number in half. Okay, now cut out all the young kids and the old men. Just imagine the college age kids. How many would you say there are? No clue? All right, all right. Just imagine the kids who can sing. Now just imagine the ones who like a cappella. Now forget everybody who isn't South Asian. Just to narrow it down a little bit more, forget about everybody who doesn't go to Penn. Now how many people would you say there are? Apparently, the answer is at least 20, because that's how many names are credited as members of Penn Masala in the credits of their new album, 11 PM. Dear lord, where did they get these guys from? And, more importantly, given the odds against this group even existing in the first place, how did they get to be so good?

I've heard way too many albums by men's groups that don't hold together. You know the kind — they've got lots of energy, but nothing fits together. That's what makes 11 PM so enjoyable. The energy levels could be higher, but guys in Penn Masala have their songs down pat. There's nothing sloppy about their performances. These songs are all built on solid foundations. And that's an enviable accomplishment, especially from such a young group. The only time they ever stumble on this album is on their stab at comedy, Show Me the Meaning of Being Desi. I like the bold way it takes on some ethnic stereotypes. It's good to be able to laugh at yourself. But whereas other songs on the album sound smooth, Show Me the Meaning sounds sluggish. Plus, some of the jokes are in-jokes and aren't going to be funny to lots of people.

If you don't listen to any Indian music, you're probably wondering how accessible 11 PM is. A lot of the songs are pop songs, some of them borrowing snippets from artists like PM Dawn, Seal, and Eric Clapton. You'd have to file this album in the pop section, not the world music section, even though a lot of the lyrics aren't in English.

Penn Masala from the University of Pennsylvania is an all-male Hindi a cappella group that tries to diversify itself by singing both Hindi songs and American hit music with a Hindi twist. Needless to say, this album is a very... interesting collection of music.

The soloists on this project never completely went off on any of the songs, leaving the project feeling very un-energetic and dull. In contrast, the rhythmic inflections in the leads, apparently very prevalent in Hindi music, were all performed with the highest level of musicianship.

I enjoyed the placement of vocal percussion in the mix, but the background vocals seemed very muddy to me. The arrangements were very thin with regard to chord structure, and when the arrangers coupled that with very rhythmic background parts it left the songs feeling very unsettled.

Maybe I'm ignorant of certain sayings or slang terms, but in some of Penn Masala's original lyrics they used terms like "FOB" and "ABCD" that I just don't understand. It's either the worst choice of filler lyrics I've ever heard, or it's an inside joke that this reviewer doesn't get.

My suggestion to Penn Masala would be to harness the niche that you've created in the a cappella market and avoid the top 40 American music. Focusing your efforts primarily on Hindi music will increase your appeal to the a cappella community.

It was with great anticipation that I popped Penn Masala's 11 PM into my CD player. Their track on BOCA 2K was highly enjoyable, and I was curious to see what the first major Hindi a cappella group could produce. Sadly, no track really achieved the harmonic beauty of BOCA 2K's Bharat Humko Jaan Se Pyara, although I did enjoy the upbeat groove of Om Shanti Om and the mood of Churaliya. The original Desi Ladki by Pankaj Kakkar was also a winner.

I am still unsure of exactly what these guys are trying to achieve. Are they devoted specifically to performing Hindi traditional music a cappella? Hindi pop music? Setting Hindi texts to original music? Taking American pop and fusing it with Hindi elements? It seemed like 11 PM may have attempted all these things, but vague liner notes made it impossible for me to know the source of the Hindi songs.

For the most part, Masala's pop attempts fell flat (literally, in the tuning of Show Me the Meaning of Being Desi, which marred any humor from the track's witty rejiggered lyrics, as well as a few other tracks), due to a somewhat static and reserved sound. An uninteresting and unenergetic arrangement of Eric Clapton's Layla held that track back. The incorporation of Seal's Kiss From a Rose and the Fugees' Ready or Not worked with Masala's dark and smooth sound, but still felt gratuitous (they fit in the chords, yes, but why?). The pure Hindi songs tended to be more solid, and it was interesting to hear effects like produced percussion applied to an unfamiliar genre.

Penn Masala gives the sense that they're having fun here, but their genre appeals to a nice audience by nature. It's hard to appreciate the whole effort without more familiarity. For average listeners, Penn Masala's best tracks are worth a listen via a BOCA disc, but I wonder if those listeners will have the attention span for the entire CD. For the knowledgeable fan of this genre, 11 PM may provide a better ride, although Masala's next effort would benefit from more energy in both blocks and solo.

Penn Masala's music can be purchased through their website, or at Collegiate-Acappella.