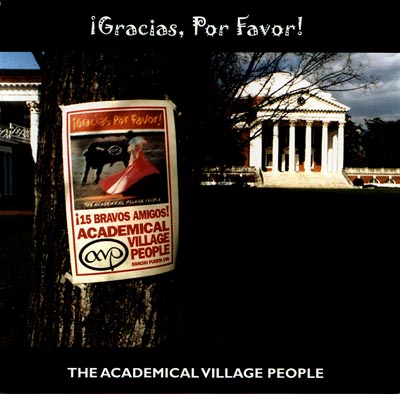 The Academical Village People from the University of Virginia have given the a cappella world their latest album, Gracias, Por Favor!. This all-male troupe does a lot of things well, but still falls short of center on the project as a whole.

What I love most about this project are the soloists. These aren't your average Sunday choir boys or pretty a cappella singers. These guys go balls to the wall on every track with style, energy, and passion. This is the sound and style of collegiate a cappella that I love to listen to time and time again. No inhibitions, no insecurities, just confident and aggressive singing.

Studio effects don't show their face around this project too much. This is a very early '90s-style mix with quality singing, not luscious studio production, as the backbone of the project.

Bass management on this album is what hurts AVP the most. I was only able to discern a true bass presence on a select few of the tracks on this album. Lack of a studio bass effect in most tracks left the burden of finding more of a bottom to the arrangers. A little advice for the arrangers: you need to separate your chord structures to allow the bass note to sound like the natural bottom of the chord. Tight spacing between the bass and baritone voices will usually hurt this feeling. A good general rule is to keep more than an octave between your bass and baritone lines. On the same subject, in general, the basses were mixed too far behind the rest of the mix.

This album is one of a very few that I've given a higher score for repeat listenability than for overall quality. The problems with the bass voice in the mix, and the inevitable moments of instability in tuning and timing, keep this album from earning a higher overall score.

This album is a very solid effort from a very respectable men's a cappella group. This is the kind of album that you're glad to have in your collection for those a cappella moments in your life...the times when your friends want to hear some a cappella and you're able to bust out Gracias, Por Favor! from AVP and put a smile on their faces.

All of the above, and quite a few more, are featured on this wildly eclectic CD, and to their credit, these Village People do almost all of their source material justice. A side note about the group's name — I'm not quite sure what it has to do with anything but I guess it's better than yet another a forced a cappella pun. [Editor's note- The AVP website states: "...the Academical Village was Thomas Jefferson's academic and architectural concept for the founding of the University of Virginia, and the Village People... well, they were just damn cool." -C.T.] The guys are an energetic bunch, with talented soloists, a rock solid bass or two, and multiple vocal percussionists. Their producer and engineers deserve a good deal of credit as well for an excellent mix which strikes just the right balance between soloist, background and v.p..

A word of warning: this album is loooong. Nineteen tracks long. Seventy minutes of music long. I bring this up because in the past, I've been critical of groups — especially those releasing CDs almost yearly — who feel the need to pack just about all of their current repertoire into a given year's recording. This CD could use a bit of pruning, too, but somehow, the length is not nearly as troublesome to me as it sometimes is. Some of the credit lies in the track sequence, which includes Adam Sandler following Bill Withers and the Spice Girls following the Dave Matthews Band. Basically, you never know what's coming next, and that proves to be a good thing in sustaining listener interest.

A few standouts: George Becker's original tune Falling is sublime, as is his Boys-II-Men-meets-Take-6 take on Bill Withers' Ain't No Sunshine (my personal favorite on the album). There is no shortage of high-voltage tenor soloists in this group, but bonus points go to John Baxton, who takes the lead on the aforementioned Ain't No Sunshine, Jim McCabe, featured on Right Here, Right Now and Sweet Child o' Mine, and Carson Hinners' work on When the Lights Go Out, Better Man, and especially I Saw Her Standing There.

A few quibbles: tighten up those busy backgrounds, especially with s's and t's. The arrangements, with a few exceptions, are spot on and complex without being overdone, but a few wayward syllables turn what is otherwise an extremely talented ensemble into mush. Also, guys, the humor needs work. The introductory opening track as well as the "intermission" instructions at the end of track #10 fall flat. Adam Sandler's Chicken Song is a low point of the album's middle third, and I Can't Rap sinks even lower. Stick to witty rather than just plain silly: the alternate lyrics to the intro of Maneater were laugh-out-loud funny, and the hidden and yes, instrumental track — kinda AVP's personal We Are the World — was about as catchy an a cappella theme song as I've heard. Despite the instruments, I couldn't help but smile.

This is the first I've heard of AVP (except for their version of Aerosmith's Angel on BOCA '99 and the CARA won by Mark Manley this past year as best collegiate male soloist), and it definitely interests me in hearing more. For the uninitiated, this is about as solid an all-male collegiate effort as you're likely to hear, maybe just one (very small) notch short of the uppermost echelon. I say buy it. Whatever you think, you definitely won't be bored.

It is an absolute delight to have the opportunity to review an album of the caliber of The Academical Village People's Gracias, Por Favor!.

This album is a fantastic collection of well-produced, crisp arrangements. The balance between the lead and backing vocals is excellent. This group is singing freely, with none of the cautious approach that is all too prevalent in collegiate a cappella. They often switch lead vocalists mid-track to provide different moods, and this, coupled with a sensitive use of dynamics, gives their songs life and flow.

Another notable aspect of this album is that The Academical Village People are not tied down to the standard doo-wop style backing. They use plenty of different background effects to provide variety. Perhaps the most notable and entertaining of these is the use of "Monica" and "Lewinsky" as the backing syllables for Hall & Oates' Maneater.

Twenty tracks is rather a lot for an a cappella album, and when I turn over a CD and see a track list that long, it sets off warning bells. Usually twenty-track albums have at least five stinkers that should have been culled. Gracias, Por Favor! is the exception that proves the rule. No stinkers in sight.

The album insert and choice of tracks demonstrates that this group has a clear identity as a comedic group. There are several novelty tracks, including Will Smith's I Can't Rap and Adam Sandler's The Chicken Song, a rather novel take-off of The Spice Girls with lots of silly girly noises in the background, as well as a somewhat irreverent spoken introduction to a Boys II Men number. After track ten there is also a message telling you that it is "time to turn over the record". Will the younger listeners understand? Probably not, but I was amused.

Perhaps the only track that gave me pause was Sweet Child o' Mine, originally by Guns N' Roses. The group uses a very interesting falsetto effect, but don't quite pull it off...it ends up sounding a bit noisy and messy. The rest of the song is as well done as the rest of the album, although I was also left with a bit of concern for Jim McCabe's vocal health after his Axl Rose impression!

Without a doubt, my very favorite track on this album is I Wanna Be, which is attributed to Big Bad Voodoo Daddy on the insert, but is originally from the Disney movie The Jungle Book. It's great fun, with lots of sound effects in the background and at the beginning and the end. Incidentally, this track was also my two daughters' favorite. They dance around the house singing the backing vocals ("banana, banana") at the top of their voices.

There's a hidden track at the end of the album, which appears to be The Academical Village People's theme song. Not a cappella, it features the group singing in silly voices about themselves. Sounds a little like the Cheers theme song. Cute.

Grading this album was hard. No reviewer likes to give all fives. Where will you go from there? However, the album was so good that it came down to personal preference. The tracks on this album that received fours were really as good technically as the fives, but just weren't my favorites.

I would not hesitate to recommend this album. If collegiate a cappella is not usually your scene, let this one be the exception. In my own collection, this CD sits in the "listen often" stack.