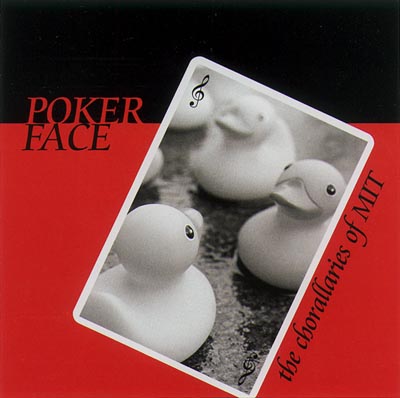 Tuning sinks the latest album from The Chorallaries. There's just too much good work out there for Joe Fan to go out and buy anything that doesn't meet a certain standard. On the other hand, if I were in the group I would not be ashamed to give copies to my friends, family, and coworkers at my summer internship. The liner notes are fabulously slick, the arrangements are decent, and the average listener isn't likely to notice the difference.

My biggest pet peeve with Poker Face: the opening cut. Beth Orton requires a little bit of care and feeding and this version doesn't have it. It sets a terrible tone for the whole album. That's a shame, because the slow stuff in the middle isn't that bad, and there's some fast stuff at the end that ends the album on much better footing than its start. Lesson for groups: always open with something good. Uptunes are good, album flow is good, but your first song is too valuable to waste on a song that doesn't live up to your standards of musicality. Listeners expect this to be as good as it gets, and most aren't made of strong enough stuff to make it down the set list if they don't get a good first impression.

What I did like: the complicated songs. The members of this group seem to have an instinctive ability to deliver opaque lines and make them sound like coherent wholes offered honestly, not pretentiously. That's a rare skill and should be encouraged. Even Joni Mitchell herself can't pull that off all the time. The Chorallaries do just fine with her All I Want, and even better with Tori Amos' Purple People and Sting's I Was Brought To My Senses. The group also does a fine and expressive job with If I Could, with nice solos and nice body tuning. As with just about every other song on the disc, the pre-solo intro to the song wasn't in great tune, but by the end of the disc I was excited to find nice stuff, so I gave it a scoring break.

In contrast, most of the dance tunes are just there. Some, like Breathless, are not believable. There isn't enough musical flash or groove, and the most lyrical soloist in the world is gonna have a hard time saving "Go-hoo on, Go-hoo on, go on and leave me breathless" after the first 20 iterations. Soloist Leah Premo does a much nicer job on Here With Me, which is also in better tune than most of its fellow tracks. Would have made a terrific opener, pensive mood or not. I liked it better than Excuse Me Mister, which is more upbeat, more abrasive and also quite well performed. Why are these songs buried at the back of the disc where no one will get to them?

The Chorallaries get guts points from me for tackling Tori Amos' Talula. It's not the easiest on the ear, but it's got good forward momentum, and at least some of the dissonance sounds like it was imported rather than added. It's also a bit of an unusual song, texture-wise, with its a cappella opening line, high accents and in and out percussion. I like it. It would have made a better opener, too.

Another nice thing: soloist Joe Cirello. The boy has chops. His voice sounds a bit untrained — he could use tighter control in a few places, and a little more focus — but boy, does he have pretty tone and a fabulous range of notes and textures. If he weren't so good, I wouldn't be nearly as attuned to his few imperfections on Just Like A Woman. It's just that they seem like the sort of problems that could be coached out so quickly, and he seems to have so much potential. Hopefully we'll hear more from him in his life after MIT — he's too good to lose to some dungeon of a lab somewhere.

See, there are good things about this album. It's just set up wrong for strangers.

The rubber ducks on the cover can't even begin to prepare you for how excruciatingly wacky the design of the MIT Chorallaries' Poker Face is. The group photos feature the members each in a zany costume: one of them is a train conductor, one's a devil, one's in a cocktail dress, one's a doctor, and one appears to be naked under his raincoat. It's pretty painful. The problem isn't just that it isn't funny (although that's part of it). The problem is that the design sends a message about the group and the album. It says, "We're a pie-in-the-face kind of group. Expect high energy antics on this album.". That would be somewhat okay if they were trying to make a funny album, but Poker Face is anything but funny. It isn't even happy. If you're looking for up-tempo, major chord pop songs, go somewhere else. There's nothing wrong with that. But the expectations raised by the packaging design make it hard to accept Poker Face for the low-key and subtle album that it is. You wouldn't see Saving Private Ryan and then complain that it wasn't a good date flick. But you would if they had advertised it as being like When Harry Met Sally. The design of Poker Face has an entirely different mission than the songs.

The only track that even comes close to matching the cover is the hidden track, a comedy song that could be called "MIT Is Easy if You Study Biology". The original lyrics are actually quite funny. They're obviously very particular to MIT, but if you know even a little bit about MIT, you can still enjoy them. But unfortunately, the Chorallaries can't make the melody (it's sung to the tune of Karma Chameleon) sound fun. The performance is dull and lifeless. The cover suggests that comedy is what the group does best, but their one attempt at it suggests that they don't particularly care for comedy.

The few dud tracks on the album all suffer from low energy and a thin, breathy sound. Those half-baked tracks sound even worse when the cover art promises you an album that will practically hit you over the head with a mallet. On most of the album, The Chorallaries have found a sound that really works for them. It's a bit sparse and somber. The breathy, overly thin soprano lines that could have killed the album instead sound strangely interesting when properly balanced against just enough bass. But even on the best tracks, they sometimes start off on the wrong foot. Without a strong bass line or a meaty solo — and the Chorallaries have a lot of strong basses, baritones, and alto soloists — the group sounds weak and breathy. Yes, the songs do quickly take a turn for the better, but the amateurish cover design somehow makes it harder to listen without prejudice and to overlook their few small mistakes. Okay, enough about the cover! Moving on...

First I'd like to talk about Sheri Ann Cheng. Although she designed the cover (sorry!), Sheri dishes out two great solos. Her work on Tori Amos' Talula is particularly impressive. Joe Cirello nails the solos on I Was Brought to My Senses and Just Like A Woman. Joe's voice has a strikingly rich tone. RARB's Bernard Levin put together three of the album's most exciting arrangements: If I Could, Two Worlds Collide, and Talula. I'd also like to give the Chorallaries credit for putting together a collection of extremely fresh (and even obscure) song choices.

Above all else, it seems fitting that The Chorallaries call MIT their alma mater. If the complexity of their arrangements is any indication, they're a smart bunch, and this is seconded by their use of engineering, which at times is intriguing. But, while smart, they are also young; the end result is technically proficient but not always emotionally or dynamically up to speed.

Nowhere is this more apparent, perhaps paradoxically, than in the group's percussion. It is uniform, generally on target rhythmically, and completely uninteresting. Coming from a group of this size, whose harmony is quite good, the percussion seems amateurish.

The same sort of thing happens in the soloists and backing voices: pitch is generally on, but whatever emotional acumen the singers might have simply doesn't come through to the ear. Silent Lucidity sounds shallow, almost cute, and similarly, Just Like a Woman is just too nice, as if the singers don't understand the misogynistic bent of the lyrics.

Now, none of this needs to be discouraging. The Chorallaries have put together a fairly solid album, with some rough patches to be smoothed over in future work. All the same, the roughness is so consistent (80% of the listed tracks have percussion) and the songs themselves so long (most are more than four minutes, including a massive eight-minute opus whose first five minutes could just be cut), the album grates a little. It has some good features, but is best appreciated in small doses.

To order Pokerface, send a check for $15 per CD to:

Include a note with your name, address, email address, phone number, and requested number of CDs.

The Chorallaries may also be contacted by email at choral-info@mit.edu.