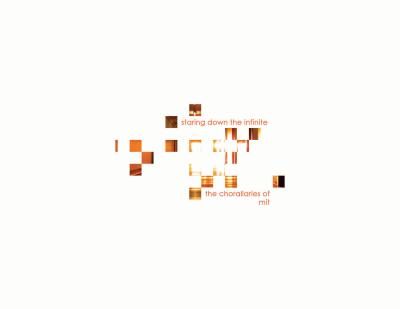 It's official — the Chorallaries have made it to the big time of college a cappella. This new album is as good as most anything I've heard this year, with a couple of splendid tracks surrounded by a mostly respectable supporting cast of tunes. It's not perfect, but it's safely top rank, and a big step up from the last album they sent our way.

First, the gems, the gorgeous 1000 Oceans and haunting The Park. Memorable solos shine against perfectly produced backgrounds. (By perfectly, I mean that nothing in the background jumped out to detract from the overall sound. I'll leave the nitpicking to the computer wizards in our group.) A few other songs caught my particular attention: Suerte, a Spanish version of Shakira's breakthrough hit that comes across well, and American Girls, with its perfect perky chorus. The coed duet work makes this song cheerful, catchy and energetic — everything a pop tune should be. I was also charmed by Wherever You Will Go, a modest song livened up by skillful percussion and a David Gray-like solo.

Most of the rest of the album is a mixed bag. The fancy production, which has come to be par for the course on an album like this, exposes some tuning flaws and also keeps the solos separated from the backgrounds. As a result, intonation issues can make the solo sound off-key or out of tune, as if they couldn't quite hear where they were going. Bring Me to Life falls particular prey to this syndrome, due to the otherwise pleasantly piercing solo work, but it's not the only one. On the plus side, almost all the solos are well-chosen. The only stinker is Don't Know Why, which is way too heavy handed for such a floaty little song.

The Chorallaries keep up their symmetry streak with a pair of Tori Amos songs, a holdover trend from at least two previous albums. At least they pick a different pair every time. This year, we get the aforementioned fabulous 1,000 Oceans, which apparently won a bucket of awards, along with an acceptable rendition of A Sorta Fairytale. This song makes a disconcerting listen because it shares the same soloist as Suerte. She does an okay job, but hangs onto her distinctive Shakira breath-scoop ornaments, which don't quite fit as well over a Tori Amos architecture.

For a bunch of presumably detail-oriented engineers, the Chorallaries brought a remarkable blind spot to "the Engineer's Song," which was apparently recorded live and slapped onto the back of the album. If these guys don't like putting a long choral composition at the end of a pop record, they should just skip it — otherwise, I think it deserves some proper rehearsal time and some shiny production to keep up with the rest of the album. This album isn't perfect, but it is very good, and this group can be proud of it for years to come.

Staring Down the Infinite, the latest offering from MIT's Chorallaries, is wildly inconsistent. Its best moments are otherworldly; its worst are completely unlistenable.

All of the basic virtues one would expect from a quality a cappella group are present some of the time. None are present throughout. Sometimes the group is beautifully tuned (Running Away, 1000 Oceans). Sometimes they're not even close (Don't Know Why; the beginning of Wherever You Will Go, which redeems itself later on; The Engineers' Drinking Song, which got a 4 anyway because it's absolutely hilarious).

Sometimes they have great energy, and sometimes they're totally stiff, often on the same song. The most pervasive energy/feel problem comes when the block is singing "ah" vowels. The Chorallaries, true to their name, sing them as their high-school choir teachers taught them to do. This is stylistically inappropriate for most of the music the Chorallaries sing. Brighter vowels would help the group sound much more convincing.

Several arrangements capture the spirit of the originals perfectly and contain many lines that lend themselves to being sung energetically (Running Away, the ICCA-best-arrangement-winning 1000 Oceans, Bring Me to Life, The Park). But a disturbing number of arrangements (Hear You Me, A Sorta Fairytale, American Girls, My Immortal) feature aimless bass lines and chords that are just blatantly wrong. Other arrangements are too spare, such as It's Raining Men. In general, the group's arrangers need to listen far more carefully to the songs they're covering, and perhaps brush up on their theory as well.

The studio work on this album is not good. As on everything I've ever heard from Bristol Studios, the backing vocals are dull, distant, and sound like they are being sung in a room full of feather pillows. (Which may well be a good thing when you're recording, but it is the job of the mix engineer to eliminate that quality with EQ.) Also, duets are frequently mixed way too hot to the point of drowning out the soloist. It seems that Bristol is trying to make a name for itself as an a cappella-focused studio; frankly, if it wants to succeed in that aspiration, it's going to have to come out with better work than this.

Alas, I have still never encountered a satisfactory a cappella version of Bring Me to Life, and I've now lost count of the number I've heard. While this is one of the better arrangements out there, its problems are twofold. First, Emily Vincent simply doesn't have the chops to take on Amy Lee. Vincent has a lovely voice, but it's a trained, vibrato-filled musical-theater-y soprano voice. This song needs someone who can belt the crap out of it. Second, vocal percussionist Daniel Bates demonstrates a profound lack of understanding about how a beat is put together. If there's any song where the snare needs to be hit really solidly on 2 and 4, Bring Me to Life is it. The beat on the Chorallaries' cover is all over the place with no drive whatsoever. (Bates is better on other songs, but in general, vocal percussion is not this group's strongest attribute.)

And I must reserve special vitriol for the Flood/It's My Life "remix". It is a popular and effective a cappella trick to layer songs over one another to prove that they are essentially the same song. My group does it with a bunch of Britney Spears tunes. But when one attempts to do that with two songs that have ... ahem ... ABSOLUTELY NOTHING IN COMMON, the results can be quite painful indeed. This track is an assault on the ears like little else I've heard as a RARB reviewer, a mess of unresolved dissonances that stretches on for five endless minutes. Alumna Amy Schonsheck gets the "What the Hell Was She Thinking?" award for this one. (If she was trying to go for a Charles Ives vibe, she failed miserably.)

Lest my Simon Cowell tendencies seem too potent in this review, I would like to mention two tracks where everything comes together. The first is 1000 Oceans. This beautiful Tori Amos song features a fantastic solo by Bo Kim, who has a rich, silky low alto voice that is to die for (on several occasions on the disc, she sings duet parts lower than the male solos). I've already mentioned the great arrangement, and this track has a nice, bright EQ setting that I wish had been used on the whole album.

The Park is even better. Dedicated "in memory of the september 11th victims", it achieves just the right emotional resonance. Daniel Bates contributes a gorgeous falsetto solo that is not campy in the least, and Charlene Chuang and Alex Del Nido join him for transcendent three-part harmony. Kudos to arranger Amy Schonsheck for reaching past the usual Evanescence and Tori Amos songs to cover this obscure old gem by Uriah Heep. In fact, I'm going to give her another award. Let's call it the "That's More Like It" award.

I would like to close this review by quoting a brilliantly awful physics joke from the album's liner notes. "your mother was a voltage, she fluxxed everyone who meter!" In the immortal words of my colleague Mr. Eric Skalinder, "Geeks are good." I just wish I could say the same about the CD this group of geeks put out.

The Chorallaries, a 16 member co-ed a cappella group from MIT, have liner notes plastered with accolades from ICCA (International Championship of A Cappella) competitions, including best duet, best arrangement, best soloist, and an appearance at the semifinals in 2003. Unfortunately their prowess in live performance doesn't translate to recording.

Their latest album, Staring Down the Infinite, is, simply put, not a good CD. This stems mostly from poor production/engineering. There are minimal effects, with the Chorallaries going for an organic/live feel from their tunes, which works for them. The quality and mixing, however, is atrocious. The background parts sound miles away, particularly compared to presence of the lead vocals. Whether they are highly compressed, recorded on bum equipment, or just mixed poorly, the background vocals don't have presence, volume, emotion, feeling, or any sense of musicality. I don't imagine this effect would be the same live, but unfortunately the group is stuck with these recordings. The original Engineers' Drinking Song has sound so poor that, while it appears to be genuinely funny and well written, I couldn't understand many of the words. The whole album should have been mastered louder.

The background vocals have another flaw as well. For the most part, and particularly in regards to the women, the singing is a little too polished. With well formed, blended vowels and timbre, the training and ability is apparent. Lacking is any gritty, spontaneous, and emotional feeling. This works great for pieces like The Park, but more explosive songs like Running Away and Bring Me to Life fall flat.

Arrangements are decent, with few qualifying as excellent. The best is American Girls, but Whenever You Go is also a good find. The tunes "Flood" and "It's My Life" have been put together in a somewhat compelling but ultimately irreconcilable medley. The poor recording quality creates unexcited and emotionally flat singing, lending many of the arrangements to monotony.

Soloists are, for the most part, below average. Premo gives a spirited Suerte (in Spanish no less), and Vincent fares well on Evanescence and the song Vincent. These are really the only two who give good solo performances, and they combine for a great It's Raining Men. Runnion and Williamson stand out with truly terrible solos, with Runnion clearly straining beyond his vocal capacity (and range) to sound like Jon Bon Jovi, and Williamson sliding all around pitch while butchering Norah Jones. She is not helped by a horrid arrangement and poor backing. The men are typically worse sounding than the women on solos.

Finally, the mix is almost always off with secondary and lead vocals. For instance Running Away has a duet that vastly overpowers the lead, while Superman needs some more of the duet.

In short, the Chorallaries didn't impress me. They need to successfully transfer their presumably interesting performance to the recorded medium. They would benefit from a more experienced producer. Overall, a less than mediocre effort.