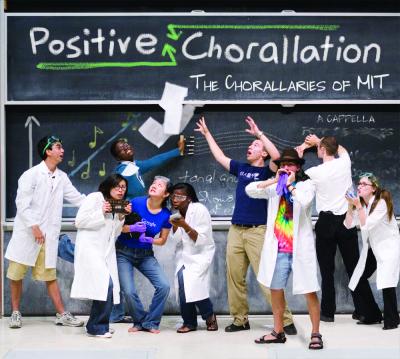 Positive Chorallation starts off with such promise, but it finishes in "just-another-a-cappella-album" purgatory. Papercut opens the album with a fierce energy that promises big things to come. But the subsequent tracks aren't consistent enough to follow through.

This inconsistency comes out in individual songs, as well as the arc of the album. For example, Bad Day starts out with a dulcet verse and lovely solo from Anna Lo, whose voice recalls a younger and more musical Melissa Etheridge. But when the chorus kicks in, the song starts to fall apart, under the weight of bad songwriting, weak arranging and a generally awkward fit. Likewise, Candyman opens with an incredibly vibrant call-and-response section. When the verse comes in, the song descends into oversung doo-wop, and by the time the stripped-down finish arrives, the group response seems leaden, unable to keep up with the call out leader's marvelous sound. On the other end of the spectrum (sorry about the pun), Rainbow Connection starts off sweet and choral. Then the tuning starts to sink and the men's voice sound ever-more produced, which drags the blend down further. And then a melismatic solo kicks in, like something you might hear on American Idol. She has a strong voice, but her performance is not quite perfect enough to make this improbable interpretation work — instead the swoops and vocalisms sound out of place. Missed moods also sink New York, New York. The song needs warmth and an audible smile, but here it gets a nasal straight tone that keeps the performance from really hitting its stride.

The Chorallaries have a lot of talent. Soloist Prathima Nandivada delivers a lovely version of If I Ain't Got You, and most of the other leads bring strong and interesting voices to their assignments. But the overall blend never hits its stride. I suspect some of this may be due to the low men — they sound more produced and less musical than their fellows, leading me to suspect that the section may be a weak link. It's hard for a group to really shine when it doesn't have a firm foundation to lean on. Also, though, I felt like this group would have benefited from more rehearsal time and a good coach to bring their overall sound together. As it is, these songs never really gel.

Positive Chorallation is an apt title for The Chorallaries of MIT, though probably not for the best reason. While MIT groups do have a penchant for witty titles and well-done liner notes, the r-squared between the Chorallaries and good albums ultimately proves low.

Much like its predecessor, Staring Down the Infinite, the most prominent problem on Positive Chorallation is poor production. Once again, background vocals feel like an afterthought, mixed deep behind automated percussion and a very upfront solo. This leaves an empty feeling to most of the album. When the block does come forward, it is usually not particularly well sung or in-tune, leaving me to believe the mixing is a valiant effort at covering up poor singing. The exceptions are the bookends; the opening track, Papercut, is easily the album's best. Yet even on Papercut, vocals sound mostly processed beyond the point of sounding human at all. Finally, many of the solos sound like the vocalist overblew the microphone.

If there is a redeeming quality to Positive Chorallation, it is the smattering of inventive tracks thrown in. Papercut is excellent: gritty, rhythmic, and energetic. Linkin Park seems well suited to a cappella. Candyman worked surprisingly well, capturing the juxtaposition of old-school sweetness and the sexualization typical of the modern pop canon. Several excellent solos in Candyman help push it along. The tongue-in-cheek-ness of a Boston-based, modern a cappella group crooning New York, New York is not lost on me, and the simple arrangement certainly plays to the Chorallaries's strengths. Finally, Rainbow Connection shows a nuanced sense of artistry by arranger Anna Lo. Even the block on "Rainbows" sounds mostly correct. Unfortunately, a distractingly over-the-top solo mars it.

In sum, the lack of an overall sense of musicality makes Positive Chorallation an uncompelling listen. This only continues the trend line for The Chorallaries of MIT, so I hope they can turn it around for their next effort.

Lately when I review a co-ed collegiate album, I find myself harping on the same issues: dull song choices and the inability to expand upon innovative strengths. Positive Chorallation is no different, and it's a shame.

With some strengthened decision-making, this could have been a great album. The Chorallaries's potential is plentiful. I love Papercut. Even if its raps aren't totally convincing, the background is full and rich, and the group does a great job with the layering and harmonies on the bridge. The energy gives the album a kick start that promises this won't be your standard collection of half-hearted covers. Other moments revive that hope, such as the lovely jazz-inspired arrangement of If I Ain't Got You by Prathima Nandivada and Anna Lo. The album also features the first a cappella version I've heard of the ambitious throwback Candyman. It's nice to hear the female trio and the cute production on the "trumpets" succeed in recapturing the cheeky energy of Christina Aguilera's original.

For each of those first-rate moments, however, there are twice as many disappointments. All of the bounce and cheesy charm is sapped from Bad Day with its low energy and a nasal female solo. This is the same issue that defeats Somewhere Only We Know. Even in its most basic elements, the original song is so gorgeous that it's hard to go wrong with a cover. Unfortunately, the repeated failure to put enough energy into the cathartic chorus entrance damages the track.

I've always responded poorly to the "speaking into a fan" effect that's used here in the opening of White Flag. The production trick never strikes me as a clever way to hide bad tuning; it's a red flag. That moment excepted, Bill Hare's work on the album is unsurprisingly pleasant and satisfying. Yet the production can do little to save poor song choices. New York, New York is a bizarre non sequitur with a raspy and monotone solo. Why do this song if you don't have a soloist with Sinatra-like pipes? Breathe (2 am) and Unwritten are also all-around lazy and predictable choices with insufficient arranging work to separate them from their original incarnations.

There's one thing that all a cappella groups should remember: there's something to be said for pure sweetness. Rainbow Connection may not be the best-tuned, best-sung track on Positive Chorallation, but the sentiment is simple and touching. I only wish the group had kept it simple. The overly ambitious, over-melisma'd solo that pops up after the beautiful, choir-like intro shatters the piece by placing sound over substance and forgetting that the two must coalesce. I think this is the problem that the Chorallaries most need to work on: keeping it simple. Remember the basics: energy, blend. Don't push. Be thoughtful and innovative.