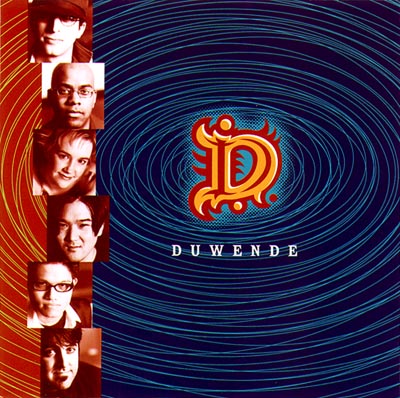 Duwende's self-titled debut doesn't quite do it for me, coming close but stopping just short of the mark. The six-member, somewhat mixed group has put out a disc of all original music, an event normally received with great applause by the a cappella world. The songs stay close to rock, with a good deal of jazz influence on the chords, good innovation in sound, and a great deal of energy throughout. But the result seems more like a beta version than a full-fledged release.

Although a disc of all originals should indeed be praised, not all of the songs work equally well. At times the arrangements seem to run out of things for each voice to do, and too often the backing vocals are bunched together on downbeats, with dead space in between. The sound is sometimes close to imitation of instruments, but is never either fully-fledged mimicry nor simply singing, with a muddled result. On the other hand, some of the songs are winners, warmly modern a cappella.

Duwende has done something a bit different from what one RARB reviewer has described as the common trend to House Jacks clones. I'm excited by the promise etched into these tracks: the singers and their sounds seem to be heading for something slightly off-center. At the moment, though, they're not quite there, and the (final) result is not quite great. I recommend this, and look forward to what Duwende does on discs to come, decentering a cappella with a bit more maturity.

I first saw Duwende in a basement bar in Cambridge. They were the only out-of-town act on a mostly local bill, and even the a cappella freaks in the audience were tempted to sneak upstairs for nachos instead of sticking around for the band from New York. But when Duwende leapt onto the stage with their signature opener Good Morning Brooklyn, they had us in their grasp and hung on with a kung fu grip. I've never seen another a cappella group — heck, I've rarely seen a band of any kind — captivate an audience with unfamiliar original songs the way Duwende did that night.

The skillful but honest production on the group's self-titled debut CD lets the singers show off their magic. I'd be hard-pressed to choose my favorite member of Duwende. In the live show, it's got to be the growling rocker Morgan Phillips or the charming Abbey Janes. But on disc, I'm equally entranced by Dexter Jones' forceful whine, Jason Baluyut's limitless tenor, Ari Picker's mellow bass, and Edward Chung's flawless beats.

It's unfair that such gifted vocalists also write such good songs. Forget the usual complaints about a cappella being undanceable. When Duwende's duende starts to flow, the challenge is to sit still. And — stop the presses — this disc contains ten original songs written for a cappella, and not a single one is a soppy love ballad. This may not be a first, but it's certainly rare.

Duwende hasn't captured their live act perfectly. Judged against the body of recorded a cappella, Duwende the album easily snags a 5 for Energy/Intensity. But judged against their electrifying show, it's practically sleepy. The difference is most notable on a couple of Morgan's showcases, Take My Money and Sister Carmencita. Maybe Morgan's stage-stomping dramatics just can't be squooshed into two dimensions, but I'd like to see another producer take a crack at it anyway. The tuning goes slightly funny in a few spots on tracks 5, 7, and 8, although non-musicians are unlikely to notice. And while as a critic I can hardly fault a group for recording only their own songs, as a fan I was disappointed not to see their butt-kicking rendition of Dee-lite's Groove Is In the Heart on the tracklist.

Duwende will be assuming their rightful place as co-headliners of the Saturday Night Gala at the 2001 East Coast A Cappella Summit,, and may just turn out to be the Next Big Thing in a cappella. Buy this disc, then fly, swim, or kayak to their show to find out what Duwende can do.

Slick production, a thumpin' rhythm section, and mile-high energy make this self-titled debut from NYC's funk-pop vocal band Duwende a good example of the top work being turned out these days by vocal bands. Will it turn heads? Give you a glimpse of the future of a cappella? Blow your mind? Maybe not, but that doesn't mean it isn't a good listen.

Slick production? I guess it's to be expected when the disc is produced by Rockapella's resident percussionist, Jeff Thacher. The sound is clear, the balance is just right, the use of the studio is marvelous.

The rhythm section? Probably the strongest part of the group. Edward Chung's percussion is driving, exciting, and flexible. The groove he gets going under Was a Time is hypnotic. The rest is just rocking. And the sound from bass Ari Picker is equally stimulating. He provides an accurate, nimble, slappy sound that energizes the grooves of each tune. The group's previous bass, J. Brett Hopkins, also turns in great performances on a couple tracks.  Take a listen to his lines on Good Morning Brooklyn for an example of some awesome work.

All the songs on this disc are originals, and are pretty solid at that. Funk is apparently their aim, put through the filter of pop catchiness, with a keen arranging hand. None of the lyrics enthrall or move too deeply, but none are so cheesy as to induce gagging. And they've got a talent for raising the energy of the final choruses by layering melodies (Your Only One, for example). The soloists, like the original tunes, are strong without being great. Rarely are they incredible, but they're never just bad. Occasionally a note's not quite there, and their tone might not be the most pleasing to your ear, but there's energy, emotion, Morgan Phillips' growl, and some great harmonies — Come Rain has a beautifully uplifting moment in the choruses.

If you're looking for something to just rock your world, you might not find it here. If you're looking for a technically impressive disc, showing some of the great things that a vocal band can do (like make you want to dance), you won't go wrong picking this up. It might just pull your trigger.

Current ordering information can be found on Duwende's web site.