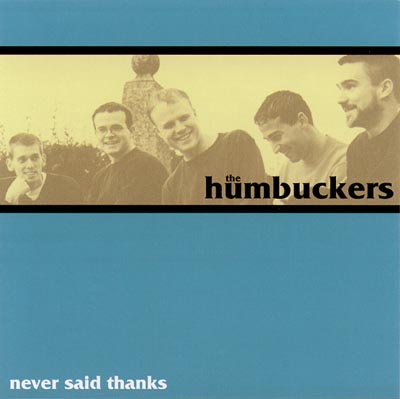 It's got a good beat and you can dance to it.

Higher words of praise are rare in the world of a cappella music. The Humbuckers hit that holy grail on the first try, proving that the collegiate farm team system is producing better talent all the time. These boys can sing, they can belt out a convincing percussion line, they can arrange, and they've learned a few production tricks somewhere along the line.

More to the point, they get it. I liked this album most of all because it knows it's a pop album. It's not supposed to take itself too seriously, even when it's going after Radiohead's art pop or some heartfelt original creation. Five white guys with liberal arts degrees are not supposed to be brooding artistes making the great American record — they're supposed to have fun making music that the rest of us can have fun listening to. Go Humbuckers!

The percussion helps a lot. It gives body to Let Down, which could be really dreary in the wrong hands, and gives definition to the group's self-penned Bitter Citizen and their cover of Matthew Sweet's Girlfriend. Without it, a song like Here We Are gets a little too much mileage out of "doop doop" and the like.

This album is 40% originals and 60% flannel pop. The arrangements have a similar groove, but enough breakouts and texture changes to stay clear of the unisound abyss. The "guitar" solos are believable and the vocal drums are real nice. This is a great album a la Ball in the House, or a cleaned-up and slimmed-down good male college group. If that's your thing, this will be too.

Featuring top-notch production, well-chosen covers, and surprisingly good originals, The Humbuckers' Never Said Thanks is a bright light in the bland world of post-collegiate "semi-pro" a cappella.

What's unique about this album is the way the covers and originals blend — the average listener would be hard-pressed to distinguish some of the more obscure pop-rock covers from the band's own efforts. Even their lone punk number, Bitter Citizen, finds its evil twin in Blink 182's All the Small Things a mere three tracks later.

If I had one caveat it's this: The Humbuckers haven't entirely found their own voice. Sometimes they sound a little wacky, sometimes like a band with something to say, but too often they sound like just a really good college group.

Right now The Humbuckers are tops in their class. A real album with only their own songs? That will take them into a class all their own, where they belong.

Never Said Thanks, the debut CD from the D.C.-based Humbuckers, is a solid enough start-up recording. It's a decent collection of alternative rock songs and originals penned in the same vein, but it also shows how much room they have to grow before they can really start to turn heads.

The Humbuckers' sound is quite unfocused; wide vowels and unsupported tones give this disc a very amateurish sound. While their tuning and precision is quite good, they don't fill up space with their sound. Instead, most of their arrangements come off as thin, with the "lush" knob turned down. Some tweaking could also have given a rounder bass to support the rest of the sound. I'd like to see these guys work on connecting their voices to their breath, so the tone can get stronger and more focused. A richer tone would make me want to pay more attention to them. Their sound on this disc also seems quite similar to how they'd sound live. There's very limited obvious layering and overdubbing. And it's solid enough that I think they'd be great fun in concert, especially with the added energy that live performances bring. But it's a mixed recommendation when it comes to a studio disc.

The tracks form a nice cohesive whole. None strays too far from center (where center = standard-fare alternative rock songs). If you didn't know any of these songs, you'd be hard pressed to guess which four were their originals. Radiohead's Let Down might be the farthest left of center in nature, although it's performed without enough energy or despair to really bring out the heart of the song.

The most promising part of this group/CD? Bradley Terrill. One of the two newest Humbuckers, he wrote the disc's two best arrangements (No Tomorrow, also my favorite original tune, and Little Black Backpack), and turned in the strongest solos as well (on his two arrangements and Vertical Horizon's You're a God). He comes from Virginia Tech's Mixed Emotion and the 2001 CARA-nominated Juxtaposition, which he directed. Clearly he learned something in his collegiate a cappella days. His arrangements play well to the sound of the group, creating more of an ambiance to play in, and his solos are pretty dead-on.

In all, a decent effort. Never Said Thanks won't be getting too much airtime in my apartment, but it shows promise. And showing promise is a good thing with your debut recording. I'll be keeping an eye out for The Humbuckers' next release, and even more so for a live performance.