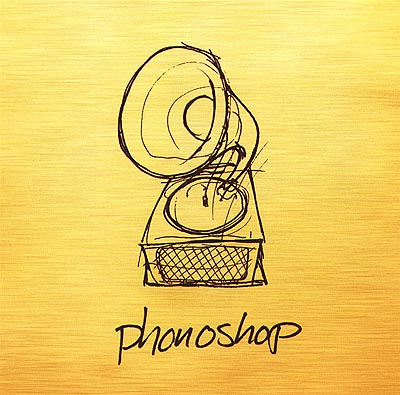 Think you can't judge a book by its cover? Take a look at the cover of Insanity Laughs by The Stanford Harmonics. It's a great disc, but damn, look how freakin' dark and muddy that cover is! The cover also happens to sum up the disc's two biggest problems:

Now check out the cover of their new disc, Phonoshop. It's crystal clear and charmingly sunny. And lo and behold, Phonoshop proves to have a much more lighthearted track list than its predecessor. They still know how to pound out a hard-rock sound, but this time it seems like they're having a bit more fun with the material.

However, the track list still has a few questionable song choices on it. The opening track, a cover of Michael and Janet Jackson's Scream, may come the closest to matching the energy of the songs on Insanity Laughs, but is it really worthy of all of the effort they put into it? Could their time have been better spent practicing a song other than Kryptonite? Also, I respect the Harmonics for finding an obscure and decidedly odd song like Oh So Quiet, but an a cappella version is practically destined to fail. The song works by alternating between freakishly tranquil verses and blastingly loud and brassy verses. The soloist does a nice job with the material, but the backing vocals are doomed on two fronts. The gentle part of the song is too gentle and sounds like wussapella, and the loud section can't match the piercing sound of Bjork's version. If you've heard Bjork's version, you'll think that the Harmonics have missed the mark. If you've never heard the song before, you'll just be left scratching your head.

Okay, onto the highlights! Dido's Thank You, a song that would have been out of place on Insanity Laughs, is one of the real winners on this album. Van Halen's Right Now is a fun song choice and The Harmonics give it their all. Their version sounds as good as the video for the song looks. (Anybody remember the video? Anybody?) Phonoshop can also boast of two things you don't see enough of:

Despite some great tracks, Phonoshop isn't as good as the group's last disc. Normally, that would be discouraging — the idea is to grow stronger get with each album, right? But I still think The Harmonics can be proud of Phonoshop, an album that suggests The Harmonics are on the right track.

Phonoshop is aptly titled. Each of the tracks on this well-put-together album sounds as if it's been filtered, flanged, altered, edited, and generally made such as a cappella can become only in the studio. The result is an energetic and interesting whole, with only some of the problems that too often afflict college a cappella.

Playing into good studio time are the arrangements, complex and varied across their lengths. This sort of complexity makes good use of the co-ed format; different voices and talents are put to suitably different uses, including percussion nicely varied according to the track and backing voices filling out the acoustic space. The complexity only occasionally gets the better of the singers, with some minor tuning problems now and again.

As always, there are standouts (the "excellent" songs above), and some things which the group might do well to improve. The perennial collegiate problem, soloists, rears its ugly head here as well. Some of the leads are fine (Thank You, surprisingly Right Now), some less so (We Are in Love).

All in all, though, Phonoshop is high-quality, co-ed contemporary collegiate a cappella. Recommended.

The Stanford Harmonics have put together a very interesting album, Phonoshop. It's the fourth release from the West Coast group, and is a collection of some very good pop cover tunes. The arrangements are pretty solid, although the backups feel too wordy at times. I really liked what they did with the opening track, Michael & Janet Jackson's Scream. Very cool stuff here with tons of energy.

The production quality is very good, very clean, and very uneven when it comes to the mix. I'm hearing way too much of the soprano section and not very much of the bass section (or tenor, or alto, actually). I wasn't sure I was hearing the mix properly on my crappy speakers, so I brought the CD into my recording studio and played it through my studio monitors and studio headphones. Nope, still too much soprano and not enough bass (especially noticeable on track #4, Thank You). The bass section that I can hear sounds pretty thin and not very round (some EQ or bass enhancement would go a long way here).

The soloists are all very good singers. They don't suffer from the usual collegiate-a-cappella-oversung-musical-theatery-voice. Very nice reproductions of the original artists. I'm a big fan of track #3, Beautiful. I've never heard this song before, but from listening to the Harmonics' version, I can imagine what the original sounded like, and that's really cool.

I would recommend picking up this album if you're interested in hearing a pretty solid college group. The production is very clean and they do quite a bit of really good stuff with effects and production. Groups that are working on recording their own albums and feel like they're coming up with some very flat-sounding recordings should give this album a listen for ideas. The production gives it a bunch of depth that makes it very interesting to listen to.

For current ordering instructions, visit The Harmonics' website or send mail to jberkley@leland.stanford.edu.