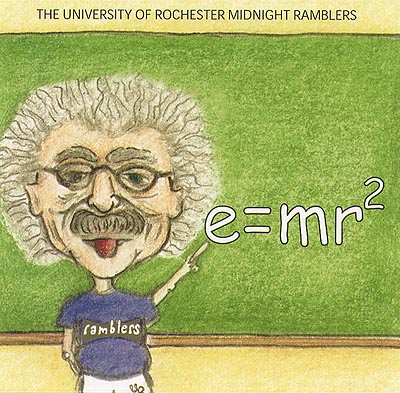 A writer sometimes tries to come up with something clever to say, in RARB's case about an album. Sometimes there are several options open; sometimes only one idea suggests itself. I think the latter is the case here. True to their name, The Midnight Ramblers do tend to go on. That said, their album isn't half bad. The overall effect is...nice.

This all-male group does a good job, and over a fairly good range of song styles. As an all-male group, their approach and attitude will strike many listeners as familiar, even comfortable. The singers are humorous (Walk the Dinosaur), as reflective as collegians get (Brian Wilson), and, of course, romantic (Lady in Red). All of this is done fairly well; the overall effect is nice...because it is familiar and a little bit new.

But there is nothing that seems to stand out, no track taken over the top (although I do like Lady in Red, if it is a bit saccharine, and the Barenaked Ladies cover). I suspect that this is due in part to the studio; the recording sounds underdone, with too much "street corner sound" on songs clearly asking for more (Truly, Madly, Deeply above all, but also Lady in Red, which could have stood more shimmer). Thus the overall effect is nice, because it is familiar and a little bit new ... but it does seem to drag on. Hence my clever pun.

e=mr2 is not great, but good: a solid effort from the crucial all-male sector of collegiate a cappella.

The University of Rochester Midnight Ramblers was founded in 1998 by a former Yellowjacket. It is a fourteen-member men's a cappella group, and its founder graduated in 2000. For such a young group, MR has done very well.

e=mr2 is their second album in three years, and is featured on BOCA 2001 with Truly Madly Deeply. There is one original song on the disk, Won't Say Goodbye, written and soloed by J. J. Moscato. It is a pleasant song reminiscent of a ballad by any boy band.

While there are a few tuning issues, and some harsh moments, MR has a nice blend and overall sound. The album was produced and mixed by the founder, which is a disadvantage, in my opinion. An outside producer can be objective and blunt — two characteristics I feel are necessary in putting out a high quality album.

A few production changes, raising or lowering voice parts, adding a bit of reverb, and rerecording those pitchy moments would have made a world of difference to this album.

Nonetheless, e=mr2 is a good effort by an emerging group.

The Midnight Ramblers are decidedly competent. Tuning on their disc e=mr2 is (mostly) well above average, and blend and vocal percussion are solid. Solos are inconsistent, but several offer far more emotion and control than the typical guy group. Props to J.J. Moscato for penning a solid original ballad, always a plus on a college disc.

Unfortunately, repertoire, arrangements, and a bad case of the blahs are holding this group back. Several of the song choices best suited to show off the group's strengths, such as Lady in Red and Brian Wilson, suffer in comparison to versions released by numerous other male collegiate groups. Some arrangements, such as It's Alright, are so repetitive that I was bored after sixty seconds. While The Midnight Ramblers win points for actually attempting to tune their alma mater — a feat that eludes many excellent groups — The Genesee is not a track I'll be returning to. And overall, The Ramblers need to loosen up a little more. I'm sure they cook in person, but they come across as rather tight and restrained in the studio. It's most noticeable, ironically, on Make Me Lose Control, where they definitely don't.

The Midnight Ramblers have sound fundamentals and quality voices. I hope on the next disc they apply those skills to better material.

To order, send your address and a $14 check to: