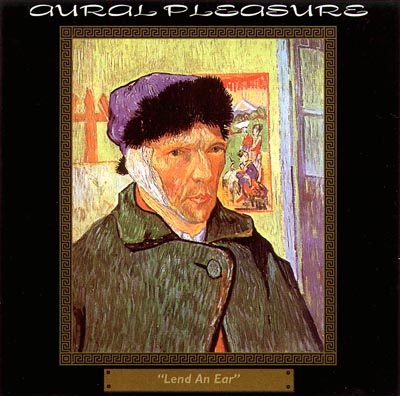 Off the Beat fans take note: if you're looking for a bit of nostalgia, Aural Pleasure's Lend an Ear is the CD for you.

For the uninitiated, Aural Pleasure is a mixed a cappella group from Emory University — the oldest one, founded in 1994 — and of the 14 listed tracks on their third album, six were arranged by CARA-winning arranger and former Off the Beat-er Rob Redei and four were arranged by CARA-winning arranger, former OTB music director, former RARB reviewer, spiralmouther, and all-around a cappella demi-god Gabriel (Gabe) Shabbtai (Shabbalicious) Rutman (Mann). For the record, two of the remaining arranging credits go to the group's music director Erin Quist, one to members William Shepler & Ryan Wilensky, and one to Scott Harris (formerly of another UPenn group, the all-male Pennsylvania Six-5000, as well as Five O'Clock Shadow, and currently singing with Ball in the House).

So essentially, from an arranging point of view, Lend an Ear comes off as a promo CD for UAAS, the Ultimate A Cappella Arranging Service, which provides arrangements (for a price) to those groups that can't or choose not to do their own arranging, and which features Redei and Rutman (and for a short time included Harris as well) among its staff. What's peculiar is that in Quist, Shepler, and Wilensky, Aural Pleasure does appear to have capable a cappella arrangers in their midst. True, their arrangements don't generally approach the level of sophistication of the professionals, but personally, commissioned arrangements somehow don't excite me as much. I know that's unfair, but especially with arrangers like Redei and Rutman who have a very unique sound and style, which may have been best captured in their work with their own collegiate groups, listening to Aural Pleasure's "shin-dops" and "zhangs" can't help but make me feel like I'm watching a fashion show of hand-me-downs.

To some extent, I guess I also have to partially point a finger at the group itself — that is, as an ensemble, these guys and gals simply aren't yet in the league of top notch collegiate groups. They're quite good singers — the sopranos, in particular, handle many a complex background line with ease — and their enthusiasm comes through even without seeing them perform. But in many places, the unison parts within sections (particularly basses) are not in fact in unison — not on pitch, not in rhythm. Actually, small rhythm problems pop up quite frequently, in particular between soloist and background. The vocal percussion is just "there" for the most part, and lacks the necessary bite. The album's mixing does not work in the group's favor, as the engineer apparently preferred an open, airier sound which gives no added weight to the bass or v.p. and further detracts from a group which already lacks crispness.

Another unfortunate negative: in my opinion, if you're going to record songs in 2001 that so many other groups have been doing for several years, you need to sing the living daylights out of them. I'll forgive perennial fave Walking on Broken Glass, as I'm pleased that Quist decided to tackle it herself. But after Vox One recorded Aretha's Respect, the song could have been retired to a cappella heaven as far as I'm concerned. Rutman has given them killer arrangements of Rio and Freedom '90, both of which prove to be just a bit more than the group can handle (if they were soliciting OTB-style arrangements, they might have tried Lillie Chang's pre-Gabe Freedom '90 off OTB's second album ...where's the band?, which is a far simpler arrangement but far cleaner to perform). And speaking of handling, even having enjoyed Wilensky's capable solo, I'm still desperately hoping for a moratorium on arrangements of The Black Crowes' Hard to Handle.

To be fair, there are a few gems here; Peter Gabriel's Blood of Eden and Blind Melon's No Rain were my personal faves. But three things need to happen before I can truly recommend this CD to folks outside the Emory community: 1) the group needs to be a bit more creative with its repertoire and find arrangers (from within, from UAAS, or otherwise) who take into account the group's strengths and weaknesses; 2) tighten up the singing; and 3) find an a studio/producer/engineer who has a better feel for the unique challenges of recording a cappella.

Of course, even OTB wasn't knock-your-socks-off fabulous from the outset (check out their first CD, Rhythm Method, a noble effort, good in its time), so I truly do look forward to checking these folks out again a few years down the line.

Aural Pleasure's Lend an Ear features Van Gogh's self-portrait on the cover and an ear on the CD face. Aside from the ambitious group name that I'm sure has caused more than one person to check the spelling, this is a fairly standard contemporary collegiate a cappella album.

The arrangements on the whole are pretty good — four by a cappella demi-god Gabe Rutman, six strong efforts by Rob Redei, and a few other contributions. Sometimes the mixing, and slight imprecisions in execution made an otherwise good arrangement sound a bit muddled.

The soloists seem fairly trained, but often lack edge and individuality, especially on songs like Respect. The soloist on Black Water was quite good, but unfortunately she had trouble with the lower notes.

One song that troubled me was Walking on Broken Glass, which moves at breakneck speed from start to finish.

There is also a hidden track at the end: Let's Get It On sung by a couple of guys and accompanied by a guitar. In my opinion, the song is really out of place and doesn't serve a purpose for the album or the group.

Lend an Ear is a decent album from a group that has the potential to do much more. I would suggest getting this if you have seen and enjoyed or know someone in Aural Pleasure.

As a relatively young group (established in 1994), Aural Pleasure might have been excused for producing a fairly uninteresting album for anyone outside the Emory community. But Lend an Ear is their third album, with arrangements by the renowned Gabe Rutman. Why retread such familiar waters (the majority of tracks having been done to death by other groups or featured on BOCA) with a bit of experience under your belt and a renowned arranger lending a hand?

There is some good blend and tuning; this is to be expected, as many of the voices (particularly the women) smack of strong training. This is always a great foundation to work with, but too many of the singers here fail to adjust to the pop repertoire at hand, either in solo or in block. Kathleen Quinlen is a welcome exception, lending a bit of bite to Black Water. At moments the group really sounds like they are letting loose a bit and having some fun, although it could have gone much further. Neera Goyal also gives No Rain a whimsical, pleasant take. These two tracks, the best of the album, are also, tellingly, the two most interesting song choices.

For the most part, the original arrangements fail to leave an impression, with trite syllables and underwhelming attempts to reproduce instrumental solos note for note, while strong arranging by Rutman is tempered by poor mixing. There really isn't much production to speak of here, with a basic mix that gives the group an overly warm, round sound that often further accentuates the group's aforementioned weaknesses. The mix also tends to be severely unbalanced, with soprano-heavy levels that make some blocks painful to listen to; at times I could have sworn I was listening to an all-female group.

The problem probably lies not in the voices, but simply in the approach. Certain moments hint that these singers could produce a bit more grit and edge than they show, particularly the live Under Pressure, with strong block singing and a group performance that was a lot of fun to listen to. (In contrast, what on earth was that secret track? If anyone in the group would care to explain what purpose some random performance by two guys with a guitar serves...) A more distinctive track choice, interesting production, and passionate blocks and solos would undoubtedly raise the bar beyond this yearbook CD, one that doesn't seem to showcase what Aural Pleasure might be capable of.

CDs are $10. For current ordering information, send email to Aural_Pleasure@learnlink.emory.edu.