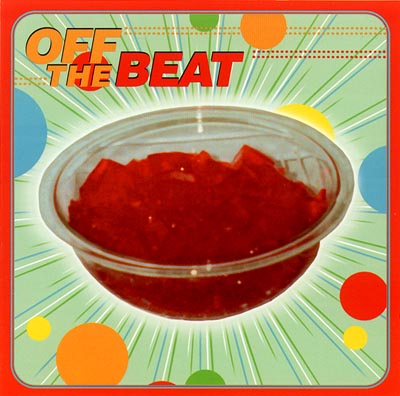 Their reputation precedes them, and this year's incumbents do not disappoint. Penn Off the Beat has grown from the forward guard into an archetype that solidifies a little more every year. The new album has photos of glamorous and beautiful singers and a repertoire of alternapop songs that the less hip among us have probably never heard.

I was familiar with maybe six of these songs, although some of them are so generic for their genre that they could have slid right by me without much notice. Most of them aren't the songs I would choose, but I'm not as young (or as hip) as the latest UPenn generation. I hear echoes of the past in some of their arrangements, with the consonant-heavy, intrusive backgrounds of the Deke Sharon-Gabe Rutman era of collegiate a cappella. But mostly I hear singers who seem connected to pop culture now. I like that this group exists.

There's enough diversity here to keep the songs from blurring together — though just barely — and enough continuity to keep the album cohesive. Radiohead's Let Down was the highlight of the album for me, as solo and background wove a smooth tapestry with no shortage of fine detail. Jessica Gordon continued her string of sultry solos, most notably on Come Here Boy. And Off the Beat's 14 singers did a credible job with Durufle's Ubi Caritas, the intro to Three Libras, even if their fuzzy sound marks them clearly as a pop group, not a choir.

The principal idea behind Off the Beat was to sing current songs, fresh off the radio, not just ancient disco and doo-wop. It's a mission that seems to have stuck around even as the rest of the a cappella world caught up in many other regards. Most of the top-tier pop groups now can put together a similar level of modern arranging, mature soloists and tight overall sound. No one else has been as true to this genre, though, this mainline feed from college radio.

May the tradition continue.

Off the Beat's new album is self-titled and, as you might guess, with a name like "Off the Beat", it's got to be good. It's probably their strongest album since When Mama's Not Around. The group's line up on this album is rock solid. There isn't a weak performance or a dud track to be found. What else do you need to know? Buy the damn CD already. End of review.

Now, for anybody out there who's already gotten their hands on a copy of the disc, let's discuss. My favorite thing about the album is that the group returns to its old trick of quoting other songs. They've been drifting away from that recently, so it's nice to hear some really bold quotes in the arrangements. Hemorrhage and Let Down were already strong songs, but quotes from Blood of Eden and Creep gave the arrangements a little something special.

I think the group made an interesting choice in their arrangement of Desert Rose. When you think of that song, you think about how great Cheb Mami's vocals meshed with Sting's. This is just the sort of thing an a cappella group ought to pounce on, but instead of running with it, their arrangement downplays Cheb's vocal line. On some level it's stupid to downplay a song's hook. But then again, could anybody else duplicate the chemistry that Cheb and Sting had? Probably not — it was an exquisitely conceived duet. Given that a different pairing of voices would pale in comparison, it's not such a bad idea to downplay the hook after all. It may lack the magic of the original recording, but the Off the Beat version can stand firmly on its own two feet.

Although, as I said, the group's vocal performances are as good as they get, the song choices are a little ho-hum. Normally when Off the Beat sings a song I'm not familiar with, I feel like they're exposing me to something new and exciting. But this time the songs I hadn't heard of before don't sound especially worth knowing. They also — despite the choral intro to Three Libras — sound a bit monotonous when played back to back. The last OTB album (Tribulation) featured lots of highly distorted effects contrasted with beautifully sparse arrangements like Wild Horses and That I Would Be Good. This album lacks that variety. If you took all the songs from this album and Tribulation, cut out the few duds on Tribulation (Beautiful Stranger and I Try), mixed the songs up, and put them on two separate albums in a random order, you'd end up with two discs that are both better than the original albums. The distorted effects on Tribulation and the more conventionall recorded songs on this album would have sounded better if they were interspersed.

Speaking of song choices, the album features OTB's first Ani DiFranco cover. It works well, but it wasn't what I would have guessed they'd pick for their first Ani DiFranco song — I would have thought they'd be more eager to try the devastating School Night, or Hello, Birmingham. Or maybe I'm not surprised at all. Maybe I'm just dropping hints. It's hard to say for sure.

One parting thought: for the first time in a while, I kind of like the cover design on an OTB album. It's garish, but intentionally so. It's a retro '80s kind of design with a silly concept. It's fun. However, it doesn't match the music inside. It would have been a perfect cover for the first OTB album, but a cover that models itself after a box of Jell-O doesn't quite fit an album with songs from groups like Fuel, Radiohead, and Snot.

Perhaps the most influential collegiate group of the 1990s was UPenn's Off the Beat, whose distinctive arrangements, production, and repertoire led to an unbroken run of CARA and BOCA honors. Being familiar with the group largely through tracks off an unnamed file-sharing service, I was more than curious to see what a full album could offer.

So this is what all the fuss is about.

One of the most remarkable aspects of this CD is the tour de force by the Off the Beat soloists. Somehow they've found twelve singers with energy and edge, the usual stumbling blocks for collegiate a cappella. The women are stronger in providing a varied (and therefore more interesting) set of performances, with two standouts being Jess Gordon's peerless blend of breathy alto, belt, and head voice on tracks 6 and 10, along with Morgen McOwen's belt-that-never-ends on I Will Love Again. On the male side, Ian Lear-Nickum has a wonderful clarity and warmth up high, adding emotion and differentiating himself from the strong, but sometimes indistinguishable, rough, alterna-rocker solos by the rest of the men. But to single anyone out is unfair, as nearly any of these soloists could be a superstar in a lesser group.

Production is extremely strong, with subtle but interesting effects that come with institutional memory and a strong grasp on the material at hand. OTB's distinctive sound and arrangements were mixed to its advantage; nearly every song has a fantastic moment where some woman's belt or tenor line comes soaring through. But that definitive energy sometimes leads to problems with tuning, most often in women's blocks at the top of their belting ranges.

This album also demonstrates OTB's ability to pass on a tried-but-mostly-true arranging style, rhythmically complex and full of quirky syllables and words in block. Lear-Nickum shows an impressive hand at using different tricks and styles in the majority of the tracks, and the arranging by other members is equally strong. Unfortunately, at times things border on too busy, and the lyrical additions can be somewhat hit-or-miss. For example, the "silence, oh silence" tenor line on the pre-chorus of Delirium, along with the soprano words as the song closes, are almost comical; a simpler arrangement could have preserved the eerie, Gregorian quality of the original. Yet soprano and baritone strains of Sonique's Feels So Good were perfect over Lara Fabian, adding complexity to the chords and filling out an otherwise repetitive dance song. Desert Rose was the weakest track, suffering from poor imitations of the original's world music vocals and a painful attempt to add lyrics to the instrumental section.

But there are no real failures here, and the group makes it nearly impossible to pick out highlight tracks among so many gems. I can only mention moments like the end of Faster, Faster with its shaker percussion, the first quiet chorus of Angel's Son, etc. Lear-Nickum's solo and arrangement on Let Down (listen for the build to the final chorus) is inspiring, worth the price of the album alone. Even with its faults, the album is not only the best of what groups out there are offering, but perhaps one of the strongest and most consistent efforts OTB has released, based on what I've heard from their tracks on previous BOCAs.

Oh, and one last thing: be sure to check out the group picture in the liner notes. Not only can they sing like hell; they're hot, too. Life just isn't fair.

To order, visit Collegiate-Acappella or send a check for $17 to