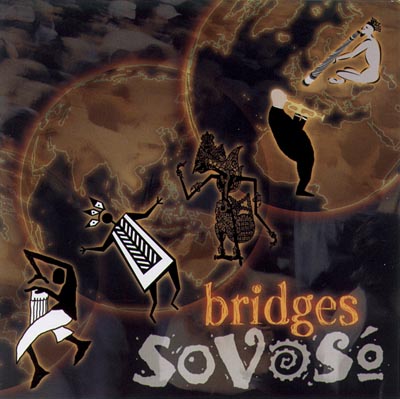 Bridges is a cleaner, tighter, but slightly more orchestrated recording than any of SoVoSó's previous efforts. It's often easy to get lost in the mood of the CD, but there are occasional moments when heavy-handed effects choices break the naturalistic feel. I would have preferred that SoVoSó left the occasional electric guitar sounds and processed chorusing to FOCS or BiTH; they find their mark with heartfelt delivery alone.

Average production values and a tendency towards slightly too much textural and dynamic repetition weaken the mostly solid arrangements. Dynamics are also a touch neglected. But even with these criticisms, SoVoSó remains an exceptional group, and Bridges, an enjoyable CD.

By now, if you know SoVoSó, you probably love them, and if you don't know SoVoSó, then let me be the first to slap you and ask "where have you been?".

I have very little to say about these folks that hasn't already been said by others (or by me in reviews of their first two albums): individually and collectively, they can solo, sing, blend, harmonize, compose, and arrange as well as any group of people currently working in the a cappella music world today. Their original music — which in the case of their latest release, Bridges, is the entire album — achieves a level of intelligence and sophistication that makes most of what one hears on the radio these days, a cappella or otherwise, sound like drivel. Their lyrics never cease to intrigue and engage the listener, and likely could stand alone, even without music, as meaningful and evocative poems.

For the initiated, none of this should sound surprising. But even if you are familiar with SoVoSó's work, you're probably not prepared for Bridges, which enhances what has always been the best of SoVoSó (as described above) and virtually eliminates the tiny little beefs we (or at least I) had with the group's earlier efforts. The "covers" are gone, but one doesn't miss them (the closest you get is a re-mix of David Worm's "Say"). Unlike earlier albums, there are no improvs or excerpts from dance suites to be found either. There are still one or two tunes that go on just a bit longer than one might wish for, but then again, part of the beauty of SoVoSó's music has always been its quasi-hypnotic effect on the listener, and repetition of a final chorus or phrase beyond what might be considered conventional, or even recommended, often enhances that effect. Essentially, what's left are ten top-notch tunes, ranging from funk and R&B (think Take 6 with a Stack-from-FOCS on v.p.), to African Serengeti rhythms (think Paul Simon & Ladysmith Black Mambazo), to reggae (think pseudo-Vocal Sampling). OK, one of the tunes features a spoken-word solo, but heck, they wouldn't be SoVoSó if they didn't try stuff like that.

For the uninitiated, by this point, I hope I don't need to convince you to check out this album. So just two other points you should understand. First, the folks in SoVoSó are all very much in touch with the religion in their lives and their music is an extension of those feelings. An intense spirituality permeates the feel of virtually every track — I wouldn't call it religious music per se, but it's certainly music inspired by religion — but you'll also find that most of the sentiments they express are common to the hopes and dreams of people of all religions. Call it "The Gospel According to SoVoSó" (which in some cases, describes both the music and the message). Second, open your mind to accept crossover/pop music beyond Top 40. "Catchy" and "simple" do not equal "good", and "interesting" and "complex" do not equal "zzzzzzzzzzz". Do so and you'll be encouraged to discover that yes, Virginia, there is intelligent music out there, yes, it is a cappella, and yes, you can tap your feet and rock out to it.

How in the world can I assign a "repeat listenability" score to an album like SoVoSó's Bridges? One spin is too many, but three are too few. Most listeners (myself included) will not fall in love with this fusion of jazz, gospel, and folk the first time they hear it. With a few exceptions, these are not especially accessible tracks. But if you are willing (or, in my case, obliged) to give this disc the multiple listens it demands, its creativity and depth may win you over.

Certain tracks simply did not work for me, even after ten tries. I enjoy a good poetry slam now and then, but the portentous pauses and pretentious repetition of the spoken-word lead on Charity left me rolling my eyes. Similarly, the soloist on Build a Bridge struck me as self-indulgent. I wanted both men to hush so I could listen to the gorgeous block work going on behind them.

Speaking of which, I'm in awe of SoVoSó's technical perfection. The soprano line on Charity teaches a lesson in accuracy and control that most groups just never learn. SoVoSó nails every chord so effortlessly, with such beautiful tone and blend, that soloists almost get in the way. That said, Destani Wolf's husky, soulful work turns For I Am the Moon and We Will Rise into album highlights.

If you're looking for the boy-band pop common in pro a cappella, look elsewhere. Appreciating the influences that comprise Bridges is an intellectual endeavor. If you're up for the challenge, this is a great way to expand your a cappella horizons.

To order by credit card, see Primarily A Cappella. CDs may also be ordered directly from SoVoSó. Send check or money order for $18 per CD to: