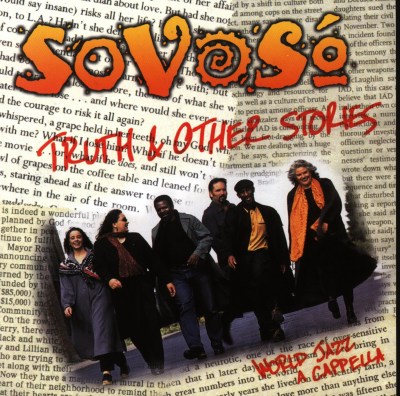 The lights are slightly dimmed. The mood is gentle, but the listening is intense. The music swirls as much a liquid as sound. You relax and are swept away by this sonic tide. That's the mood through the first two tracks. But gears change suddenly on track three when the heavy drums and preachy gospel rock/rap kick in. Not to worry: Truth and Other Stories sails us steadfast back to their subtitle, "World Jazz A Cappella".

The standout piece on Truth is In my Prime. The lyrics are uplifting, brutally honest, and revealing. Example: "Sexuality- I've tried a lot of kinds. I've lived with, lived alone, been a part of a woman family." Lead, Rhiannon gives us an intimate view of life after menopause- pro and con. Though simple, these lyrics are anything but trite. Sadly, this gem is immediately followed by With You's parade of cliches.

And herein lies my basic gripe with SoVoSó: the music is so passionate and moving, but all too often the lyrics spoil the mood. A tendency towards pop banality might be fine for Aquilera, but it's jarring when heard in this context. Example: Blake croons on With You: "I never knew love like this before [sic] each day I'm loving you more. I'm telling you girl [sic] you can be sure." It might as well be nonsense syllables.

The musicality is top-notch. If that's enough for you, and the idea of world jazz appeals, then Truth is a great CD. However, this reviewer is waiting for them to take the next step and marry worthy lyrics to their stunning vocalizations.

As I've said before, SoVoSó is a group made up of excellent singers — tuning, intonation and blend are hardly worth mentioning, they're so sure. For me the difficulties with this album spring from the group's typical material, an attempted fusion of world beat/indigenous traditions with jazz. For me, schooled if anywhere in a largely Western tradition enamored of four-four and an almost numerological distribution of verse, chorus, bridge and coda, world-jazz never seems to have any forward motion or goal-oriented organization. The music, to my ears, doesn't go anywhere. I start to wonder, "Why should I listen to this part of the song any more than to any other part? When is this going to end and how will I know?"

This is nowhere better exemplified than on For the Forest, an eight minute improvisation. Despite being so long it manages to end abruptly for want of definite motion. The distribution of voices is such that it cannot serve as ambient sound (too much creaky/screechy high voices, not enough resonant bass figures). In both length and sound it is, however, not unlike other songs on the album.

This is not music for me. I'm sure, though, that much of what I cannot detect stems from my own misunderstanding of the medium; and that, correspondingly, an audience of avid listeners exists for this world-jazz, probably very well executed by this excellent group of singers.

Truth and Other Stories — a great surrealistic title that I hoped would be clearer in meaning as I listened to the CD. It wasn't. Great title, but the meaning still escapes me. This was the critique portion of the title. As for the rest of the CD? Imagery abounds, musical texture is rich, and this little piggy has gone to market and come back home shouting more than "WHEE WHEE WHEE!" (I'm in a nursery rhyme mood; humor me.)

Every track on here is deep in its hills and valleys of matching lyric to arrangement, save for two — and one of those two were improvs, so SoVoSó is batting an impressive average here.

To draw a comparison with the other recently reviewed recording World Jazz A Cappella...first off: liner notes!!! Love 'em. Always good for those of us keeping (or conducting) score at home. This is also especially appreciated, as the poetry of the lyrics was just as compelling as the blend and harmony.

Secondly, the flow of tracks didn't feel quite as well this time around. Does this mean it's a horrible compilation of tracks? HECK NO!!!...just that the I didn't get the same stream of consciousness as I did with World.

The tracks are definitely longer here, as there are nine tracks that span 46 minutes. One of those is an eight minute improvisation that could have possibly been edited or left off. It doesn't kill the CD, but I was worried that post-improv tracks were going to be worse off.

So, in conclusion — the lyrics were sheer poetry...the arrangements were full and lush...I could have done without the improv, but the CD is definitely worth buying. Again SoVoSó show why they are going to retain their title as World Jazz kings and queens.

No a cappella CD collection could be considered complete without this album from the award winning sextet SoVoSó. This second album has a more earthy and less funky feel to it than their debut album. Without blemish, the smooth, velvety harmonies sweep you into a calm mood no matter what your state.

The album opens with the soulful Be of Love and demonstrates that an arrangement need not be complex to feel full and interesting. In an a cappella world of increasing thickness (as far as sound goes), SoVoSó's open airiness and dynamic contrast sound fresh and wonderful.

In My Prime is a personal favorite of mine. I had no idea it was recorded live in front of a studio audience (sounds like an eighties sitcom) until I read about it in the booklet. You'd never know it. Rhiannon sings the song of a woman who has grown older but realizes that even though her physical appearance may not be what it once was, she has found herself in her true prime. She sings with such soul and conviction that you cannot help but feel her pain and joy along with her.

SoVoSó has truly reached new heights with their latest album. It would be a crime to be a fan of a cappella and to have not listened to this album at least once (more likely you will listen again and again).

Bear with me, 'cuz this could get confusing...

I love SoVoSó. I love their voices — both independently and collectively. I love their willingness and ability to push the limits of a cappella music and the human voice as a whole. I love their inventiveness, their boundless creativity, and their ability to infuse pop idioms with meaning and intelligence.

That said, do I like their second album Truth and Other Stories? Yes, with qualifications. Sitting down to listen to a SoVoSó album, you can pretty much dispense with worries over tuning, overproduction, weak solos — these are not concerns. The tuning is spot-on, the studio work is sometimes noticeable, but always tasteful, and the soloists are scarily talented.

Moreover, is there any style in which these folks can't sing!?! Moving seamlessly from jazz to funk to R&B to gospel to rap, you could easily think you were in the company of Take 6, The Real Group, The House Jacks, or Manhattan Transfer, depending on which song was playing.

Maybe — if you're willing to stretch a little; if you're willing to accept songs which are as much, if not more, about words and sounds which combine to create a mood or atmosphere, than they are about good construction and listenability; if you don't mind an a cappella tune which is more of a "tone poem" or "performance piece" than a "song" per se.

Mind you, I don't blame you if this isn't your cup of tea. On their first album, SoVoSó was savvy enough to throw in a few covers so the more mainstream folks would have something to keep their attention through the "artsier" songs. No such "bones" here. Each song is a unique, complicated, musical experience — sometimes with a more traditional feel (as in the 3 songs penned by Joey Blake), sometimes with a more avant garde approach (see Rhiannon in Gift of Music or In My Prime). Rest assured though, they're always exquisitely rendered.

Casual a cappella fan beware: this is intellectual music for an intellectual listener. Call it an a cappella adventure. Heck, I'll admit...I even got lost a few times. But in the end, it was definitely worth the trip.