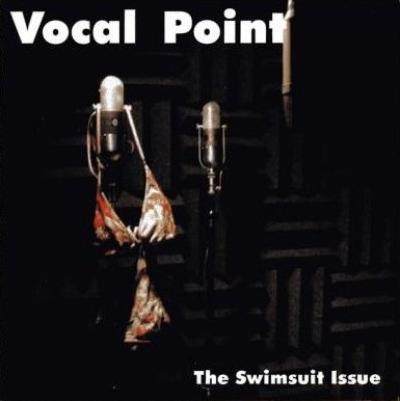 Groovy, retro energy floods this new album from Vocal Point. There's a lava lamp on the back cover, burning bright like the rich voices oozing out of every song.

When Somebody To Love bursts out of the opening track, Amanda Ahrens doing a world-class Grace Slick, it's clear that Vocal Point isn't just thinking vintage, they've gone and done it. There's a blessed lack of girly on this record — no canned Vanessa Carlton or Natalie Imbruglia numbers lurching toward a cotton candy climax. All the solos are rich and individual, and all the songs sound somehow authentic, even when they miss perfection by a mile.

Perfection isn't much of a factor. The songs range from not really in tune to not even close to in tune. The arrangements mostly stick to "doo" and "ba" and "jigga", and the production is just crisp enough to highlight the sketchy intonation. Only the live track, Fallin', sounds really cohesive — probably because the weaker sound quality blurs out the flaws. The blend is actually pretty good for much of the album; it's the tuning that sinks it, aided by the relatively simple and block chord-heavy arrangements.

But onto the songs — the songs are great. Well selected, and also well sung. I particularly liked their interpretation of Love You Madly, which is BOCA-worthy as far as I'm concerned. Two chestnuts, I Think We're Alone Now and Tainted Love, are actually pretty credible, and Elsewhere has lovely leads despite its background tuning mess. Criminal is nicely seething, and the background for Both Hands chimes beautifully behind a pleasant if under-edged soloist.

The tracks are well-ordered and show an admirable amount of range. Kissing You has a wonderfully dark, dangerous solo by Alison Zwecker, while I Hope Tomorrow is Like Today has a lovely, lilting, breathy lead from Catey Juravich. The 70s songs sound fresher than most groups can manage, without spilling that sound into their more modern choices. There's an overfondness for medley arrangements, but they all generally work okay. I'm willing to go along with the gimmick because they all sound deliberate and determined.

Drive makes this album. Despite its flaws, I think it deserves role model status for the great universe of average groups with average resources trying to make something much more.

I don't know if it's the album itself or my brand-new status as an unemployed, directionless college graduate, but I've never been quite so unmoved by a RARB submission — either positively or negatively — as I am by Vocal Point's The Swimsuit Issue. It's pleasant enough. It's rarely objectionable. It's decent. It fails to stand out in any way.

The group's block sound is full and rich. Tuning is pretty good, except when it isn't (Both Hands, bits and pieces of lots of other songs). Gen Chawluk turns in some quality VP; the other women sound amateurish. Energy is acceptable but not exceptional. Arrangements are solid and draw little attention to themselves, except for a tendency to break into incongruous song quotes. (Hey Jude in the middle of The Long and Winding Road?) Song choices are relatively fresh. Effects basically consist of a grossly abused flanger all over the place and a neato robot effect on Tainted Love.

Marisa Antos-Fallon's sultry alto sounds perfect on Paint It Black and Tainted Love. Alison Zwecker brings the emotion and the beautiful, rich timbre on Kissing You, but the damn song never ends. Sam Haddad's guest bass adds gorgeous depth to that track's background, but ... the damn song never ends. Zzzz. (Haddad and guest tenor Matt Roe are barely audible on I Hope Tomorrow is Like Today. Guest percussionist Ian Koff makes a huge difference.) The rest of the soloists are fine but don't stand out.

Beyond the basic laundry list of attributes to evaluate, I'm at a bit of a loss. There's nothing really glaringly wrong with the album, nor anything glowingly right with it. It's yet another in the long line of Pretty Good Yearbook Albums that will end up gathering dust on my shelf.

But if Vocal Point has matured to the point of being able to put out a Pretty Good Yearbook Album and not just a Mediocre Yearbook Album, then they should be ready to really take it to the next level when they begin work on The Swimsuit Issue's successor. Here's hoping.

There is not a whole lot of positives that can be doled out in praise of The Swimsuit Issue. Similarly, there is not a great abundance of negatives. On the whole, the album engenders a fairly neutral response on the part of the listener. Think of shrugging one's shoulders to the sound of ... "eh". And there you have the meat of the problem with Vocal Point's latest release: It's not particularly bad — it's just boring.

When the group is good, the group is good — but never over-the-top, never electrifying and never superlative. The album's best tracks are the bookends, Somebody to Love/Paint it Black and Fallin'. The opener is the group's best foot forward, in which Vocal Point synthesizes two disparate artists very effectively. What the performance lacks in solid pitches, it makes up for with gusto and energy. Fallin' compares favorably with the rest of the tracks because the group grooves in a very solid rhythmic pocket. The track also should show the group what can happen when you put a strong soloist out front: the pitchy background voices are less noticable.

On that note, the majority of the album suffers from a lingering unsteadiness of pitch. It never gets really bad in any particular spot, but rough tuning is consistent throughout the disc. The problem seems to crop up mostly with attacks; the chords start out messy, but then correct themselves after a few split seconds. Two examples of this would be What You Wish For and The Long and Winding Road.

After pitch, the next thing the album needs is more present and steady bass and vocal percussion. The group needs to spend more time and energy on this aspect of their arrangements in order to make a more credible pop recording. Pop music relies on the rhythm section to such a large degree, it cannot be ignored or treated as an afterthought. Too many songs featured weak and elementary vocal percussion, as well as a non-existent bass in the mix.

Ultimately, the album is guilty of rolling along without making exciting musical moments happen. There are no chill-inducing chords or dramatic build-ups. Most songs on the album are forgettable. The album is a fitting yearbook for family and friends, but sadly, is not a recommended purchase.