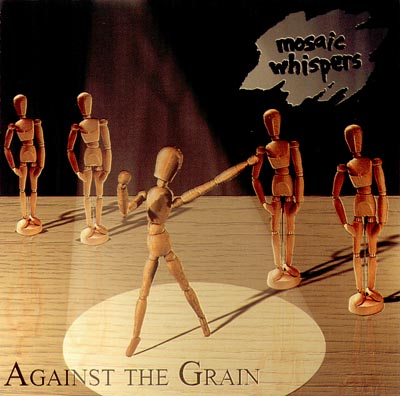 Straight up, the latest Mosaic Whispers CD entitled Against the Grain is first-rate. If you sense any hesitation in that first sentence, you're not mistaken. My first exposure to The Whispers was their last CD, Throw Your Pennies at Someone Else, and I eagerly jumped on their bandwagon and marked them for myself as a group to watch for the future. What troubles me about this latest CD is that while all that was good in their previous effort remains as strong as ever, Against the Grain does not seem to build on those strengths and instead leaves the group exactly where they were: solid, fun, entertaining, but still missing a consistent flair, originality and sophistication that would allow them to match up favorably with the "big boys" in collegiate a cappella.

The Whispers appear to take great pride in the eclectic nature of their repertoire and in that respect, this CD certainly succeeds. From Janet Jackson to Tori Amos, The Temptations to Radiohead, Talking Heads to Garbage, you'll never be bored with the source material. But alas, it therefore requires a more eclectic ear to sit through this album more than once. What's more, the slower and mellower arrangements, which make up half of the album, pale in comparison to the complexity, invention and intriguing production that has been given to the more upbeat tunes. I realize this isn't entirely fair — it is indeed harder to make ballads as engaging as uptempos. But as nicely harmonized and lush-sounding as tracks like U2's Who's Gonna Ride Your Wild Horses and Sheryl Crow's Strong Enough may be, I kept checking the track time to see when we'd be on to the next Ben Cohan vocal percussion extravaganza.

Oh yeah, Ben Cohan. Kid's amazing. I thought he was amazing on the last CD and he's only gotten better. Forget the seven tracks in which his percussion is featured; forget the three tracks he arranged; just check out the hidden track. It's really the first hidden track on a collegiate a cappella CD that hasn't made me groan. In fact, it's pretty mind-boggling. You may have heard Jeff Thacher or Wes Carroll solo. You may have even heard Stack do bass and VP simultaneously. But this is the whole shebang and it's amazing and damn cool. Ben graduated in 2001, but for all of our sakes, I hope we'll hear more from him.

Another check in the "plus" column: the soloists. There seems to be no shortage of talented soloists in the Whispers, no one who makes you wonder whether s/he was given the solo just to be nice. Jessica Elbert has a take-no-prisoners belt that will knock your socks off (ICCA Midwest regional winner as Best Soloist for her work on Rhythm Nation), and in general, all of the ladies can flat-out sing. The men have fewer opportunities to shine, but Chris Hendricks' light tenor is quite pleasant and Ethan Balis does a solid job with the closing (listed) track. (Balis also won the ICCA Midwest regional award for best arrangement for Rhythm Nation and the group as a whole took home the Best Overall Performance award for Take Me To The River.)

Truth is, I'm still eager to hear the next CD put out by this group. And I'm still going to hold out hope that they can put it all together next time and just blow me away. Granted, I'm a bit nervous: Cohan and Balis and Nate Dewart, collectively responsible for all but one of the arrangements on this album, graduated in 2001. Cohan's shoes, ahem lips, will be hard to fill, and Balis had a real facility for arrangements that, though not always spot-on, were consistently good. As for this CD, check out the track listing. If it's your cup of tea, you'll probably like it a lot but not love it. If it's a bit too off-beat for ya, throw Pennies back on and wait for the next one.

The Washington University Mosaic Whispers have put out a great album. Against the Grain is everything I hoped for and more. They have fulfilled all the potential they showed on Throw Your Pennies at Someone Else. From what I can hear, all suggestions for the future made by the RARB reviewers have been taken to heart.

Mosaic Whispers had the vocal talent, the fantastic vocal percussion (more on Ben Cohan later), and the arranging skills. Now they have added innovation, energy, and great production.

The mixing is terrific. Most noticeably, there are no shrill soprano moments. The song choices are excellent, a nice mix of well known and lesser known. Radiohead's Paranoid Android and U2's Who's Gonna Ride Your Wild Horses were some of my favorites. Overall, the soloists are well tuned, and deliver high intensity performances.

While I often caution groups to take their recording to a studio and eliminate the live tracks, I must say that (for the most part) Mosaic Whispers is an exception to this rule. There are three live tracks. Uninvited was nominated for a Best Mixed Collegiate Song CARA and Strong Enough was forcefully and beautifully performed. While I would have liked to see the soloist on The Neverending Story get some reverb, her energy is great and she does some uncanny impressions of the Child-Like Empress, Sebastian, and Atrayu in the bridge.

Rhythm Nation is the most produced track on the album, but it works very well (and is featured on BOCA 2002). My only suggestions: I would have taken St. Teresa a bit slower and had the soloist belt the whole song. I would also have changed the intro to Just My Imagination; it was heart-stoppingly similar to the riff in Uncle Cracker's Follow Me.

Ben Cohan. Ben Cohan. Wherefore didst thou graduate? I had the pleasure of hearing Andrew Chaikin perform at the A Cappella Summit a few years back, and I think that Ben could have held his own in that company. Ben, I am so glad you have taken your vocal percussion skills to the pro group Similar Jones. I had a heart-stopping moment when I thought your hidden track was over, but then you came back for more!

Mosaic Whispers also lost three of the four arrangers on the album to graduation: Ethan Balis, Ben Cohan and Nate Dewart. As such, I will be very interested to hear their next production. I am sure that Mosaic Whispers will maintain the tradition of excellence these guys are leaving behind.

The Mosaic Whispers have created a very good collegiate a cappella CD titled Against the Grain. Like the efforts of most of their peers, this creation has its very good tracks and some that are not so good. However, Against the Grain has more really good tunes than it has lesser ones.

The most impressive ones are Uninvited and Winter. Jessica Elbert performs a beautiful solo on Uninvited and later creates an admirable duet with Katie Hershey. Throughout the song the background parts are interesting but fitting for the tune. As Jessica's intensity increases through the song, the background singers follow. While the singing is very good, the most amazing part is that they could create this track during a live performance.

While listening to Winter, my thoughts turned to sports. When a sports team knows that a certain player can score, the team makes the extra effort to give the "special player" the necessary surroundings to achieve the goal. So it was with Mosaic Whispers. They knew that if they gave the right vocal environment for Julie Schutzman she would score, and she really does on Winter. This is an ensemble effort at its best.

On the negative side is Just My Imagination. This Temptations song is too familiar to be enjoyable to anyone less than 70 years old. The Whispers missed on almost every point of evaluation. The CD would have been much better if they had just left this one off.

Finally, an unlisted track deserves a mention because I think it's special and very good. Vocal percussionist Ben Cohan graduated from the group last year. In one of his final concerts, they allowed him to take over the stage for four minutes, and he demonstrated what magicians vocal percussionists can be. It's really neat and one of the special cuts on this CD.