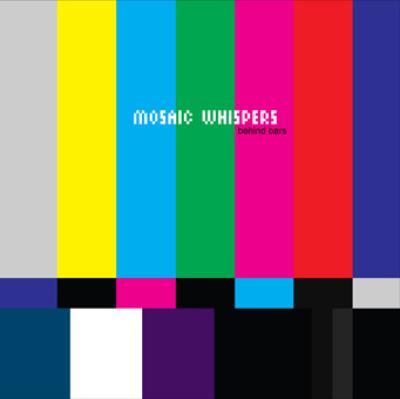 Behind Bars, the latest album from Mosaic Whispers, is unlike any of their previous works that I've heard — and that's both a good and bad thing.

Ever since I was sent Throw Your Pennies at Someone Else for review back in 2000, I've been a fan of this mixed ensemble from Washington University in St. Louis, and through the intervening six plus years and two more albums, I've been eager to give them a knock-down, all-out, no-holds-barred rave review.

Much to my chagrin, Behind Bars doesn't allow me to do that — though I'm delighted that there is plenty good to say.

Most notably, the group has gone the way of many other collegiate a cappella groups and embraced a studio sound, courtesy of Jack Petracek and the rightfully acclaimed and accomplished Tat Tong. With their new, polished, produced sound, the group has addressed a number of the concerns voiced by me and/or other RARB reviewers. Pitchiness has been virtually eliminated and a crisp, tight blend and shiny, ringing sound is now the norm rather than the exception. I do have a few nagging doubts about how much of the improvement is in the group and how much is in the engineers, but my ongoing struggle with reviewing product instead of process is nothing new. And there can certainly be no doubt that the product here (except as noted below) is a clear step up from the Whispers previous outings.

Trouble is, Tat didn't work on three tracks and the difference in quality between those and his is as vast as the Grand Canyon.

Never mind that Bachelorette and White Rabbit aren't my favorite songs — in general, the eclectic repertoire choices made the first half of this album even harder for me to enjoy, not being a big fan of Bjork, Interpol or Dido — but as rendered here, even fans of the music are likely to be unhappy. The far less produced sound reveals all sorts of flatness, in the sopranos particularly but the men are not innocent either. Lest you think it's a built-in bias against the song selection, know that I very much like Landslide, overdone as it may be, but the hyper-arpeggiated arrangement offered by the Whispers has rampant tuning and blend issues throughout and a bass line that is both pitchy and placed way too high. Sure, some purists may relish the "humanness" of these recordings and indeed, I too wish the group sounded as polished without the technological wizardry. They just don't, however, and by placing these tracks squarely in the middle of the album, they suffer that much more by comparison.

As for the rest, there is a great deal to enjoy. The opener is the first a cappella version I've heard of Be Here and it's a terrific job all around by soloist and arranger Darius Bates, who turns in another solid solo on Gavin DeGraw's Meaning. The Bring Me to Life soloist lacks a little "go-for-broke"-ness, but overall, it's an energetic, engaging track, made all the more impressive by the knowledge that the group was singing it back in 2002, before most everyone else was. Thank You doesn't show much inventiveness but, despite the resemblance to the original, grooves nonetheless. Though there are no revelations to be found in Fix You, which features a slightly too meaty solo to open the song; the overall impact is beautiful. Eleanor Rigby may be the only one of the produced tracks that falls noticeably short with too much emphasis placed on the percussive rhythms and not enough on the music and harmonies as a whole.

To be fair to the group, this album was recorded using four versions of the group over 3-4 years, which is a long time and a lot of people from which and whom to expect consistency. Having accepted the wonders of studio production, I can only hope the group can get out another CD pronto, since their latest work seems to be their best and, despite some of my disappointments with this effort, I am still a fan and eager to hear more.

After thoroughly enjoying Mosaic Whispers' last two offerings, Defrosted and Against The Grain, I had high hopes for Behind Bars. While my hopes were not fulfilled, I understand why. The Mosaic Whispers provide a paragraph of explanation on the album, almost an apologia, explaining that a change in school funding resulted in a delay in their ability to put out the album. So Behind Bars contains four years's worth of recordings, a few tracks from each incarnation of the group.

Understandably, the album is a hodgepodge of songs and quality. Interspersed with the lush and interesting Eleanor Rigby was the lackluster Landslide. With the nicely done Obstacle 1 there was the ill conceived Thank You.

Behind Bars's forty-three minutes of high energy, well executed, and generally pleasurable a cappella boasts a track list of both a cappella favorites and uncommon, riskier tracks. In fact, the risk factor proves key to this album's success.

In the a cappella world these days, taking risks is required to make a group stand out. And taking risks generally means erring on the side of complexity, rather than simplicity. Too many groups can boast excellent blend and tuning for merely those factors to merit an excellent rating. And so the complexity of arrangements and production techniques ultimately determines a large portion of an album's eventual success or failure. This is where Behind Bars proves an excellent example. The production of tracks ranges from standard cleaning up on tracks like Landslide to an outright onslaught of production effects in White Rabbit. The arrangements range from the relatively simple Stuck to the complex Bring Me to Life, which also benefits from its share of post-recording production.

Behind Bars works almost perfectly when the group doesn't try for too much. Obstacle 1 and Bachelorette are great examples of how production can work to a track's benefit. Without the finishing touches, these songs would be mere shells of their current incarnations. Meaning succeeds with its smart, creative arrangement, and rousing but not overly complicated sound. The result is a standout track. Conversely, White Rabbit devolves from fresh and intriguing into a warbled mess lost in flashy, ineffective production. Thankfully, Mosaic Whispers decided not to toe the line more than once or twice in the twelve songs.

Of course, to take risks effectively a group needs all the aforementioned prerequisites, which Behind Bars without a doubt possesses. Blend, tuning, and timing are all generally strong, but Julia Mancini's solo on Stuck rushes heading into the chorus, and questionable soprano lines hide behind Meryl Zimmerman's near flawless solo on Thank You (whose scatting was reminiscent of Ella Fitzgerald's live recording of Mack The Knife). The soloists are consistently strong, but Darius Bates and Elysa Kahan stand out on Meaning and Bachelorette, respectively.

But above all, Mosaic Whispers knows how to end an album right. Fix You is five minutes of near perfection, with its simplicity and superior solo outclassing, in my opinion, the recent Off the Beat recording. John Michael Rotello and group fire on all cylinders for the first four and a half minutes, but as good as the rest of the song is, the last thirty seconds are even better. It's a perfect end to very good album.

To order this or any other Mosaic Whispers album, visit the group's website or email the group.