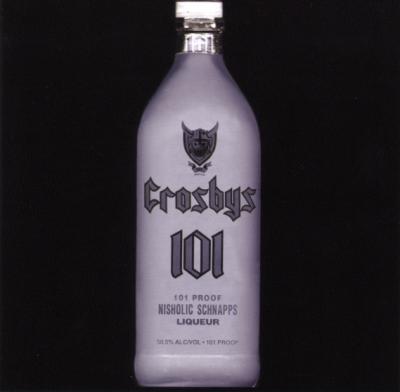 Crosbys 101 isn't the laugh-fest The Crosbys achieved with Super Bos, but they've replaced most of their cheap jokes with a level of musicality the group hasn't achieved on any recent release.

This isn't to say that that The Crosbys aren't above desecrating the occasional Phil Collins soft-rock classic with some equally classic inappropriate back-up text. But The Crosbys now have some real blend and intonation. They have dynamics. They have some moments of cool VP a la The Ex-Boyfriends (Mama). They have some heart-felt solos (I'll Catch You), challenging arrangements (Seaside Rendezvous), and rockin' alternative covers (A Murder of One). They got it all.

There's still room for improvement, mind you. By contemporary standards, the production is only OK. The soloists have moments of greatness, but are hard-pressed to maintain that level throughout entire songs. Blend goes in and out, as does intonation (which despite studio trickery is horrendous on All Is Fair in Love). And depending on how much you like 101, the CD is a little short.

Fans are sure to enjoy it; others will find it much like other collegiate fare. But those following the progression of this group will surely be impressed by The Crosbys' impressive musical strides.

After reviewing The Crosbys' previous release, Songs in the Key of Nishole, I was expecting Crosbys 101 to be another frat-boy production, complete with various bodily noises and images of gleaming naked butts. I was also expecting an energetic album with imprecise execution. I was wrong. Oh, there is still a photo of naked butts in the booklet. However, the bodily functions are thankfully absent, as are most of the mistakes of their last album.

Crosbys 101 is a good album with some great tracks. I would not be surprised if these guys garner BOCA and CARA recognition this year. The Crosbys maintain a high level of energy and a distinct sense of humor (the liner notes thank the Binghamton Police "for making sure our parties never got out of hand and didn't run too late").

The group has great blend and tuning, and is very precise in executing their solid arrangements. Their song selection is great. I also enjoyed The Crosbys' mixing and production. It was clean and did not overpower or hide their voices.

The soloists are all solid and better than average. It is rare for a guys group to have so many standout soloists at one time. The producers should monitor pitch in solos a bit more, though — there are a few moments where it slips.

Josh McMahon's and Scott Eckers' voices have a pure, sweet, pleasant tone. Chris Sheppard adds emotional punch and soul to All Is Fair in Love. Gabe Lander shows not only vocal range, but also quite a range in style as he flits from Billy Joel in All for Leyna to Queen in Seaside Rendezvous to AC/DC in the spoken word comedic piece Big Balls.

As I did on Songs in the Key of Nishole, I wanted to put faces with the names. Next time, include a little caption on the fitted-ribbed-shirts, make-a-sexy/serious-face photo on the back of the booklet.

The vocal percussion was great, but some of the body percussion sounded a little off — especially in Against All Odds — perhaps some more VP would have been better than snapping/clapping/chest slapping?

There were things that I could have done without, but these are the things that make this a Crosbys album. There were three humor tracks and some hidden numbers after the final song on the album. One of the hidden numbers was a long spoken word/vocal percussion thing that had cool moments but was just really, really weird...that is The Crosbys for you.

This album is a lot of fun, and there is a lot of good music on it. Check out the track list, and consider adding it to your collection.

I had to drop off a friend today at Hartsfield Airport in Atlanta, one of the busiest in America. While checking the boards, I wouldn't have been surprised to see "The Crosbys" under the "Departures" heading. This group is on its way, and is almost there. Crosbys 101 is a valiant album, in some aspects perfectly perfect, which makes the less-than-perfect sections stand out even more.

When I say valiant, I mean that in its truest sense. I was surprised at the song choices; they made some very bold and innovative selections. Almost none of their songs were pulled from the recent pop circuit, and I certainly wouldn't have thought to choose them. I was particularly impressed with Nisfunk, an interesting mix of Boyz II Men, Biggie Smalls, and Destiny's Child (though it clearly illustrates the group's suburban roots).

The Crosbys start off fantastically. I know I shouldn't use the analogy, but All for Leyna hits like your favorite Journey jam. It is striking, perfectly in tune, and complex, yet still moving in unison. The opening chords immediately grip the listener, as if to say "pay attention!". It also sounds exactly like the original, showing the group's penchant for faithful arranging. The faster songs, such as Leyna, A Murder of One, and Nisfunk are full of sound and rarely go out of tune even in the loudest, richest sections. On the other hand, their slower songs, Against All Odds, I'll Catch You, and All is Fair in Love fall short in comparison. The notes, rhythms, and tuning are there, but they simply don't have the energy or grip of the faster tunes. In trying to fit the ballad mold of male a cappella, they have missed the mark. The exception, however, is Mama, an unlikely gem coming from the middle of the album. This is a masterpiece. Despite how many times I listen to it, it sends chills down my arms . It's so eerie, yet so natural sounding, the listener gets sucked in. This bold and risky choice paid off big.

The Crosbys' production and mixing is fantastic as well. By subtly playing with the sound, they were able to create unique and realistic-sounding percussion, as well as great stereo effects beyond a rich general blend. The basses are dead on, providing a well-rounded and consistent sound at the bottom of all the songs. They could, however, use some help in ordering their songs. They put slower and lower-energy songs together too often, and jovial songs like Seaside Rendezvous and Big Balls, along with cute audio snippets, aren't positioned well. The CD just doesn't flow right.

There are two other things I would like to see from this group. First, mix it up more! Very few Crosbys contribute all the solos. Second, the length also leaves something to be desired, since the scant running time of 40:39 probably only includes half an hour of music.

The big winner on this album is Gabe Lander, who not only co-produced and helped mix the tracks, but made fantastic album art, balancing out his act with fantastic solos on Leyna and Rendezvous.

I almost went to Binghamton. Now I'm a little sorry I didn't, because after the next album, the video monitors at Hartsfield may well display "The Crosbys" under the "Arrived" column.

CDs are available for $10 online through The Crosbys' web site.