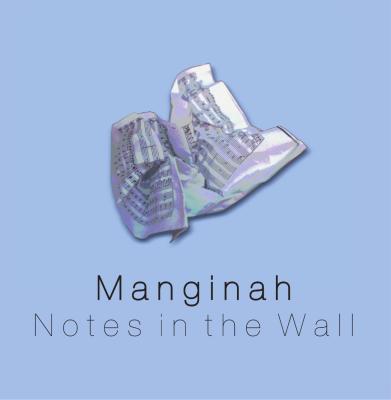 Manginah is good enough that its success rises and falls on its repertoire choices. This is a big step forward for this band — tuning and technique are no longer holding them back. They're not one of the transcendent few who sound good doing absolutely anything, but they have reached the elite level of being good enough to sing songs that can be judged on their own.

On Notes in the Wall, there are some winners, notably Jerusalem. Great tune, great solos by Elizabeth Imber and Adam Ross, great sound. I'm even willing to forgive them the Break My Stride medley. I mean, I think it detracts, but it probably goes over really well live and therefore helps sell CDs. Adam Tzover Zichronot and Tamid Itcha are also pretty good numbers. Ross comes back later on Ein Ani, which has a charming Arab-pop groove although it's not as pulled together a track overall since the prominent soprano line tends to drift.

Other songs? Limited appeal. Whiny or boppy or boring or clunky or all of the above, many of these songs seem to suffer from the same problems that plague a lot of casiopop in the non-English speaking world. Perhaps there are fewer working bands, so the quality pool is smaller. Perhaps it's just that schmalz sells. In any case, most of this will probably not catch your ear. Kama Od Efshar sounds like it came off someone's Nashville scrap heap. Perhaps it was intended for a boy band or Faith Hill wannabe. Yonatan Shapira gets on my nerves and Yoshvim B'Beit Cafe grates.

Manginah has improved leaps and bounds since the last album that made it my way — almost all of the album is technically fine. These days, "just fine" is really good — it represents a lot of work and a big achievement. Now that they're over that hump, they may want to think harder about the next hurdle: choosing songs that have broader appeal.

That pretty much sums up the overall impression that I got after listening to Manginah's latest recording Notes in the Wall.

I can't really tell you why you should like this album as much as I do. The tuning and intonation is an acquired taste. The entire group sings with a forced nasality that totally works on their style of music. The album has a very bright and buzzy sound that might be off-putting to most but it's also extremely energetic and engaging.

The women are better soloists than the men. The ladies are able to control and manipulate their instruments in more ways than the men can. A great example is during the song Parparim. Adam Lapetina and Jennifer Levy share duet privileges on this uptempo ballad. Lapetina is static in his delivery using the thinner aspects of his voice, whilst Levy conveys a warmth to her passages that is entrancing. Especially in the duet part, he comes across more as a backup singer than an equal partner in performing the song. He sounds good, I just wanted more power from him.

And that's exactly how most of the guys sound on the album. Not weak, but not nearly as mature as the girls. Again, the quality is effective at times, but if you don't like mostly whiny male voices, you aren't going to dig this. I dig it.

The arrangements are simple in nature and construct. The better songs incorporate slightly alternative syllables than the standard "ba", "doo", "doh", and "ah" to convey a more Middle Eastern flavor to the songs. To this Western ear, the sound is refreshing, not distracting.

A prime example is the hauntingly beautiful Tamid Itcha versus the slightly insipid and syrupy Kama Od Efshar. The former is this gooey mass of glorious sound whereas the latter trudges along with its "bah bah bah bah" 4/4 pattern. It doesn't help Kama Od Efshar that it's buffered by the two best songs on the album ... the aforementioned Tamid Itcha and my favorite song on the album, the dance song Ein Ani. From the rapping, the call and response, the soprano obbligato, the rhythmic drumming, the electric lip buzz to the pizzicato strings — all of it is glorious. I have no idea what they are saying, but it makes me want to sing, dance and party with them ... and that's usually a good sign that I'm enjoying a track.

Maginah is not going to displace Six13 as the reigning kings of Jewish a cappella, but if the sound is your cup of tea, I heartily recommend them to tide you over until Six13's next album is out.

Jewish a cappella is not easy, but Notes in the Wall does something relatively unusual: it often makes you forget that you're listening to songs in Hebrew. Manginah works in a niche market with a limited palette of songs to choose from, and yet they've managed to put together an album that, for the most part, doesn't sound dated or cheesy.

Arrangements on Notes in the Wall are mostly unobtrusive. The balance is good, with middle male voices coming out and not being dominated by the upper females or a histrionic soprano. There are some questionable syllable decisions, like the dreaded "nehw nehw" guitar solo on Kama Od Efshar, and something like "pah taye toe" on Happy Ending.

The good tracks, however, are good. Jerusalem is easily the best track on the album. The mostly vowel pad arrangement takes a back seat to the well-layered lead vocals and harmonies. The affected reggae solos are performed tastefully, if tuned a bit too tightly for my tastes. Big props go to Adam Ross: the liner notes list him as a bass, and he's blasting high B-flats all over the song! Also notable is Ein Ani, a track so full of fun you can't help but play along. The whole track screams kitsch, but in a way you can totally appreciate.

Other impressive leads include Talia Salzberg's grin-inducing Tamid Itcha, and Rebecca Fisher's Broadway-inspired performance on Latet. Unfortunately, Manginah chose to feature more male leads than female. Of seventeen soloists listed, ten are men and only seven are women, yet the female soloists far outshine the men.

I can't give this album a "5" in the Tuning/Blend category. Maginah's vowel shapes are uniform, but often sound young and unpleasant. I also have to fault the group for its collective pronunciation of Hebrew. With one or two exceptions, it all seems very Anglicized, particularly the vowels. Likewise, the transliterations provided on their website are often woefully incorrect or inconsistent.

There are a few other missteps, song choice the most bothering of them. The Israeli music scene is behind the curve in terms of musical innovation and definitions of "dated". Tracks like Yonatan Shapira and Kama Od Efshar could, with English lyrics, easily be late '90s or early '00s buffer rock. The ballads are forgettable, with the exception of the last 30 seconds or so of Parparim, where the two leads and the backs come together in one massive crescendo.

The inclusion of Happy Ending as the album closer is inexcusable. The pun has been played out. The track sounds alright, with the exception of the mediocre lead, but it doesn't add anything to the album. If anything, Happy Ending detracts from the experience. I would have much preferred if Notes in the Wall ended with Latet.

Manginah seems like they're just beginning to learn how to use their best singers effectively. As such, it doesn't quite measure up to the entire catalog of recent recorded a cappella as a whole. However, if you're in the market for shiny and new Jewish a cappella, you want this album.