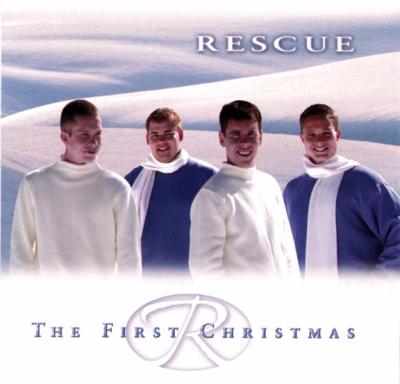 Rescue is a group that I have not had the pleasure of reviewing before. I am glad to have that pleasure now. The First Christmas is a mixture of standard Christmas songs and a few originals. All of the tracks are flawlessly produced and beautifully sung.

Jason Overstreet is the star of Rescue — he did all the arranging, recording, editing and producing and shared credit for the mixing. He also co-authored one of the tracks.

These guys have a smooth blend, impeccable pitch and execution, and solid arrangements. Their music delights the ears and their message soothes the soul.

My little issues: the guest vocalist on Mary Did You Know was good, but didn't have that certain "oomph" of the other soloists. And the scripture reading in It Is He sounded very rushed. I was very surprised. The cover art of their last two albums (mini photos in this CD's booklet) is subtle and elegant. The current cover is kind of lame — mainly because of the mock turtleneck and scarf thing. But those things aside, this is a fantastic album.

The religious nature of the album (Rescue is a Christian group) may be off-putting to some. But if you have no objections to Christianity and you enjoy great music, this album is for you.

A vocal Christmas album is one of those things in the music world that you kind of brush over. Most people put out decent ones, a few put out terrific ones, and a few put out bad ones. You think to yourself, "Hey, it's Christmas, right? How bad can Christmas carols be?".

Rescue, a 4-man Christian a cappella group, does get credit for attempts at interesting and unconventional takes on Christmas traditionals. Unfortunately, their arrangements often try way too hard, usually adding disjointedly syncopated and busy blocks to traditionally pure and mellow ballads. O Holy Night was a particular offender on this front. Likewise, Rescue's periodic attempts at R&B stylings in their solos meet with little success; the group is far more successful when they drop the embellishments and simply sing.

But sadly, many of Rescue's shortcomings fall in an area more difficult to tinker with — their voices themselves. A nasal tone sank numerous solos and prevented several blocks from really gelling as well. While the group boasts fairly competent tuning and decent vocal ranges, the group blend and weak solos make the album difficult to sit through. Stronger production could have perhaps mitigated some of the blend issues and delivered a more balanced (e.g., the bass was way too low) and pleasing sound.

The First Christmas does have some nice moments, but nearly every one came with something else to ruin an otherwise nice track. O Come All Ye Faithful had some wonderful chords, but the blend and production on the opening notes reminded me way too much of the buzz of fluorescent lighting in my office cubicle. Have Yourself a Merry Christmas has a beautiful interlude in the middle, but the generally choppy arranging style and weak solo near the end kill it.

There's just not enough here to really make me recommend the album, and unfortunately there are enough problems that you should shy away from picking the album up anytime this holiday season.

Rescue might save you through their message. If not, they'll certainly save your a cappella soul with their sound. You'll feel their spirit as you delight in a crisp and soaring sound, lush harmonies, deft arranging, and a real sense that these four men are wholly invested in the mission at hand.

Acappella (the group) influences are undeniable, but that's no bad thing. These gentlemen have carved out their own sound thanks to nimble arrangements by Mr. Jason Overstreet (one of three Jasons in the group!) that really direct motion through each piece.

After hearing it the first time, I hummed hooks from the Rescue original It Is He for days. Simple, unfolding, questioning, then building, exploring, launching into a full out aerial celebration. Wonderful.

My favorite song was their other original and the title track, The First Christmas. Cool percussion with various vocal sounds. Catchy, bouncy backing vox. A killer opening hook. And lyrics that even a heathen like me found compelling.

Other standouts include a fresh, rhythmic take on Go Tell It On the Mountain and the haunting, wrenching, and writhing Mary Did You Know.

I found the production to be top notch. Consistent mixing. Good imaging. Clear and transparent sound. My only complaint is the engineer put an Acappella-like mechanical, bright tone into the mix — but on steroids. I found it too harsh and distracting initially. By the end of the disc I was over it and had chalked it up to the Rescue sound. It bothers me no more.

What really differentiates this album from others? True musicianship. It's a real pleasure. And Rescue has a rare quality these days: Purpose. So should you. Go buy this album. And while you're at it, pick up their new release due in December 2002, The Difference. There's no reason to wait.