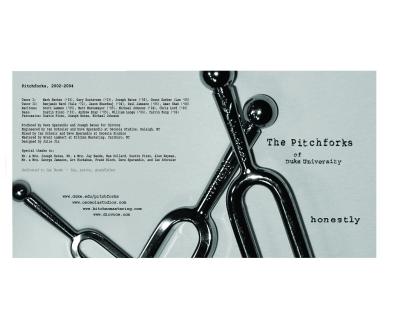 I am pleased to announce that The Pitchforks have taken a turn for the better. With Honestly, their 25th anniversary album, they've stepped up their arrangements, tuning, rhythm, tone, energy, and production. Yes, in just about every way, this album has reversed the downward trend they were showing with their previous releases. Do they still have work to do? Sure, but they're starting to make music that can compete with the top stuff out there, and that's certainly a good thing.

The whole sound of the group has improved since its last disc. The voices sound more open, focused, and resonant, resulting in better tuning and blend. The rhythms are more solid, and the energy and tempos have come up, creating a sharper, more engaging listen. They also sound like they went into the studio better rehearsed, and this is always a plus.

The production (by Dave Sperandio and Ian Schreier) is more apparent on this disc than on their previous recordings, with mixed results. Some things work really nicely, like the well-produced percussion, good block/solo balances, fuller group sound, delay use, and EQ touches. Other times, the production is too heavy-handed and distracting. I suspect this is the cause of the general muddiness that has crept into the recording. The overuse of autotune on Walking Away and My Kind of Girl ends up being horribly distracting, leaving me to wonder why the soloist would try to riff that much if they couldn't do so cleanly, or who thought that adding it all simply for effect thought it was that good an idea. Sometimes higher descants or secondary melodies are mixed too low to be as effective as they should be (check out the end of Here We Go, for example). There's also this really artificial metallic noise used in Here We Go that has detracted from my enjoyment of this mostly great recording ever since I first noticed it. In general, the production's good, but when it tries to do too much, it starts bringing things down.

The soloists perform pretty well on the disc. Mark Hecker is a standout again, with his turn on Write Me a Song, which appeared on BOCA 2004. Grant Garber does a nice job with This Love and Chris Lord closes out the listed tracks well with Bright Lights. Ah, but the unlisted track: a bonus track that doesn't suck! Good move. Another good move for The Pitchforks and Honestly is the inclusion of several country (or country-ish) tracks. It works well for them.

Sure, there's still room to tighten up the tuning, to develop arrangements more, to remove some of the more generic, filler/fluffy songs and soloists (though the chicks dig the fluff sometimes, don't they?), and to use the syllable "Hun" a little less, but the important thing to focus on, at least for a brief moment, is the solid work The Pitchforks have done to bring it on this recording. Focus... OK. Now get back to work. I'm expecting even more from you all the next time around.

Imagine if Ball in the House went back to college, doubled its group size with like-minded guys, instituted a "no originals" rule, and recorded an album. That album would be Honestly. Chock full of sugar-pop, big blocks on open vowel sounds, tight-clenched tenor wailing, and solid vp, Honestly is the perfect album to enrapture ‘tweeners, freshmen ladies, and all otherwise over-romanticized, crush-prone cheese-aholics. The Pitchforks are the perfect college group to cover groups like Pat McGee; they are plain vanilla, inoffensive, and sound quite nice.

But Honestly is a substantial improvement over Bad for the Piano. This album shakes off some of the opiate fog of The Pitchforks' poppy nature. Soloists seem to enjoy their leads, and the group seems more excited about singing. Arrangements build more strongly, the vp is quite impressive at times, and tempos quicken the pulse rather than induce sleep. The group has made improvements in its rhythm, entrances/cutoffs, pitch, and solo style/technique.

Despite the genre selection, the album has some novelty and creative value; it's unlikely most listeners will have heard the first five tracks before, certainly not a cappella. Another five tracks are of the tired Matchbox 20/Train variety that this group seems to enjoy. Even so, the majority of the album's tracks have something to get excited about.

Ironically, The Pitchforks more than dabble with studio effects on Honestly. The group turned to local Dave Sperandio to produce Honestly, giving the group a technological facelift that feels fresher than the staid Bad for the Piano. The most noticeable difference is the vp, which is much cleaner and more reliable than the mouthy, organic stuff on Piano. Impressive drum rolls, thumping kick drums and authoritative bass sound warm and punchy and groove up songs like This Love and Stayin' Alive (hidden). 'Dio did more than liven up the eq; most songs on Honestly sport some kind of interesting effect. A metallic clang rings in Here We Go, bassy throat singing ushers in the Introduction, the verses of This Love are nicely organized. My only complaints are the over-Cher-isizing of Walking Away, a few R&B turns that sound artificially drawn in (Everyday Love, My Kind of Girl), and a noticeably quieter mastering of Calling All Angels. The studio work on Honestly sounds clean with nicely sprinkled effects to liven things up.

I noticed a formula that helped the group avoid the repetitive arrangements that bored me on Bad for the Piano. Interesting efx during the intro, strong first verse, stylish soloist that nicely approximates the original artist, second verse scaled back and minimalist, interesting effect in the bridge, big block ending, maybe a group solo. Not a bad formula! The chordal structures are well-built, with a particularly cool mix of arpeggiated consonant and dissonant chords in the choruses of Calling All Angels.

Though the pop fare on Honestly is definitely not my bag, if your bag is a purse and you lap up sugary nothings like Edwin McCain and Brian McKnight, The Pitchforks' latest is a perfect match.

Honestly is a solid effort from the all-male Duke Pitchforks. It features aware musicianship, top notch production, and great vocal technique. This is a standout album amongst the college a cappella scene.

Perhaps my favorite thing about Honestly is its subtlety. I was not initially wowed, but tepid about the album. However, after repeated listens, I was able to appreciate it more and more for the all-around great CD it is.

Arrangements are not too fancy, but well-grounded in traditional part building. Gently moving parts, well-placed descants, and a clear climax in many tracks make the arrangements shine without being flashy. Their relative simplicity can be a lesson to many groups who feel that more is better. This Love stands out for the way it manages to capture the original while still managing to offer The Pitchforks' own take, with slightly more marcato and shortened notes.

Production is stellar. This is true triangular part building, with solid bass tapering to a light touch of top tenor. Balance between the background, soloist, and percussion is always near perfect. Without flashy effects and full computerized distortion, this album is engineered with a perfect balance of tradition and innovation.

Singing is excellent: well-supported, never shouty, and very well in tune. These guys obviously have talent. There are wonderfully interpreted dynamics and motion within lines. Soloists are generally slightly above average, with Bhardwaj standing out on Ain't No Sunshine with some of the smoothest vocals I have heard in a long time. I found the entire track very moving, and its short length made me wish for more.

My biggest complaint is the slower, ballady numbers. Tunes like When You Say Nothing At All and Write Me a Song just don't have the energy and power of toe tappers like Hanginaround and Everyday Love. I would also like to see some expansion from this very traditional all-male repertoire.

These are but little complaints for a great album such as this, a well-made album that lets the music speak for itself.