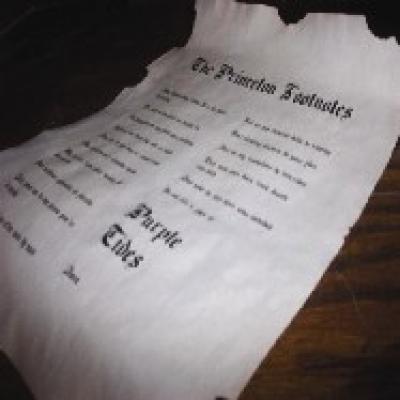 Purple Tides is a vast improvement over The Princeton Footnotes' last release. Footnote Jam 2000 was a live album that sounded like it was recorded on somebody's old Walkman at a board meeting of the Bronchitis Foundation of America. Purple Tides sounds like it was recorded with one omnidirectional mike in the guys' shower room at Princeton Stadium.

I'm such a fan of old-school a cappella. The Footnotes are staying faithful to the glee-club roots of close harmony. They feature lovely uniform vowels, careful dynamics, and choral vocal techniques on simple, mimicry-free arrangements of pop, folk and jazz. The trouble is, execution problems crop up alongside strengths on every song. A froglike tenor tone often sticks out from the block. Most of the tenor soloists can't really perform in the upper range, straining or yelling to hit the top notes. Soloists in general don't always sound comfortable or confident. VP, where it is included, is usually amateurish. Tuning occasionally goes completely haywire (Leave It; Lonesome Road). The album would have been better if they'd cut 5-6 tracks.

The biggest fixable problem here is the production. The studio doesn't have to be the enemy of a natural, honest sound. It just enables you to preserve what each song sounds like on its very best run. I hope that all those great alumni who performed with the group on the live album are reading this review. Former Footnotes, the current group needs your support. More specifically, they need your help to get into a quality studio which will show off the finest work they're capable of. Until things change, I can't recommend The Footnotes' CDs to anyone who isn't already a fan.

Not quite as yearbooky as their last release, The Princeton Footnotes' Purple Tides is still a hodgepodge of recording techniques and musical ability. And I wonder what the significance is of the stamp "All Rights Reserved" in the liner notes when they don't list a single original artist of the music they are performing. There's a soapbox I want to stand on, but I won't.

The arrangements are a major problem with the recording. Half of them were written before the singers were out of elementary school. Now while classic a cappella standards are just that, the arrangements of today sound different across the board. The Footnotes should consider re-envisioning some of their tried and true favorites to give the songs a more contemporary feel.

The soloists bring the recording down as well, with no one captivating me in a way that's needed and expected from a gifted group like this. Apparently, they need the live audience present to have that star quality to their performance, because unlike the standouts from Footnote Jam 2000, it seems here that all the soloists are phoning in their tracks. I mean, why even have the bass solo on Thank You if you aren't going to boost it so that we can actually hear it?

Charlie Alden comes closest to capturing the right spirit with Boogie Down — it's energetic and on pitch without being ridiculous. Coy Byron's smoothness with I'd Die Without You and Brian Cho's gentle take on If You Could Read My Mind are also highlights. Others think that theatrics and histrionics can carry the day. They don't. So let's not mention the travesty that is Virtual Insanity. Oh, I have to. After great work on Footnote Jam 2000, Blodgett disappoints and the ending of Tempted grates.

I'm grading their sound harsher than I probably should for an occurrence that just speaks volumes about what's difficult about single-track recording and the representational preference of a lot of groups. On a concert album, loud clapping is something that you expect, even if you don't appreciate it (as evidenced on The Footnotes' last album). Clapping should NEVER mar the sound on a studio-esque recording. Not only was the clapping not synchronized on several of the songs, it drowned the soloist completely on a couple. My group from the early '90s did single track recordings (because we didn't know any better and the engineer wasn't very helpful), and we'd only let one person snap or clap on our tracks. The Footnotes should utilize this concept on future recordings.

Occasionally, The Footnotes pull off some great block sound and strong musicality. The beginning of Leave It is pretty solid; If You Could Read My Mind is subtle, understated and gorgeous; and Spaseniye Sodelal is quite expansive and fluid. Then the goodness would fly out the window with soloists growling uncontrollably, pitchs not being hit with a baseball bat and intonation bouncing like my last paycheck. I'd just sit and stare at my stereo in disbelief.

Purple Tides is a fine album for the niche a cappellists out there, specifically those craving the unadorned, non-processed, cathedral-sounding works. For the general populations, I'd wait to see what the new tide brings in.

I rarely listen to an album where the production values detract from the performance. Unfortunately, this is one of those albums. A recording can be successful with over-the-top, incredible, über-professional production. Likewise, production that is invisible to the ear can be effective. There's tremendous room for stylistic variation in production values. But the studio problems on Purple Tides are overwhelming.

Noise, hiss, clicks, pops, distortion, or jarring digital black are nearly constant in some combination or another. The Footnotes' snaps and claps are overbearing, and the general balance left-to-right is uneven, giving the listener a lopsided experience.

The Footnotes recorded this album over the course of three days, and it sounds like it. Excellent studio albums for vocal groups just take more time. The voice is a highly unpredictable element and a difficult instrument to use consistently. And if you listen to Purple Tides, you'll hear a three day recording, not one that took three weeks or three months.

The singing is largely uneventful. As an ensemble, The Footnotes don't quite find the right combination of energy and fine attention to tuning, detail, and subtlety. Tuning issues crop up (Leave It; It's So Hard to Say Goodbye; There Will Never Be Another You; Look Down that Long; Lonesome Road) and interfere with some songs. Boogie Down, as on their recent live album, still captures attention, but the remaining 19 tracks just aren't memorable. A glee club, pseudo-choral sound is prominent on the recording. Sometimes it's effective, like on Spaseniye Sodelal or Homeward Bound. But on the jazz-influenced numbers, rock tunes, or songs that require a nice, deep, pocket, it's too restrictive, wooden and square. In a live setting, energy and presence can carry the day. But a studio recording requires more.

From a content standpoint, the album doesn't flow especially well, in part due to the fact that the group shifts styles so frequently. This is a common problem for collegiate groups that can be unavoidable, and I don't hold it against The Footnotes. Their mission is to cover a wide range of material, not develop a distinctive group sound. But with overall bland, unimaginative arrangements, uneven performances, and poor production values, Purple Tides is not an album I can recommend.

Please send $15 per CD, plus $5 per order for shipping and handling to: