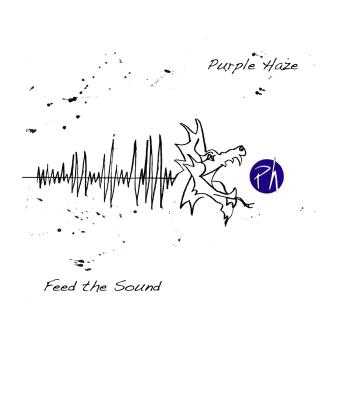 Feed the Sound tightens up Purple Haze's delivery, resulting in a solid improvement over their previous release Mosaic. Where Mosaic lacked focus, both in its rambling, overdone track list and its decent but sometimes-clunky vocals, Feed the Sound presents a slicker package, further from the beaten path and clearer in its mission. It's not a perfect album, but Purple Haze has reached the point where my thoughts are more artistic and technical. That's actually sort of a big deal.

Oddly, one of the things that caught my ear on this album was something that I almost never comment on: the percussion. It's very crisp and well done to the point where it has a real positive impact on the overall sound of the group. Most of the time collegiate percussion just keeps the time (one hopes). Here it actually supports and defines the pop/rock/alt aesthetic that Purple Haze seems to be shooting for. So, kudos on some good work there.

Soloists on Feed the Sound are on the whole an improvement over Mosaic. Still, many also exhibit a trait that, listening to both albums side by side, seems to be a bit of a trend in this groups' delivery: namely, they're kind of melodramatic. Don't get me wrong, the energy is good, it's just a little oversold at times. Harris Sockel's solo on The Process (which features some fantastic electronic effects) exhibits great range and energy; it's just not always the right kind of energy. This sort of over the top delivery would be more at home on a Broadway stage than covering an Imogen Heap vocal. Same criticism goes to Morgan Karr's take on Brian Mcknight's Superhero. Fantastic voice, too musical theater for the style in question.

So that's one challenge for Purple Haze: finding that line between epic and epic. These guys and gals seem to favor big songs, which is great, but there is a subtle important difference between selling a song big, and selling a song big with the right emotional twist. The R&B material here hits that mark much better. Come On Over and I'm Outta Love both land in pretty sublime territory for collegiate a cappella pop, feeling confident, grand, and unforced. Maybe it's just a question of better song/soloist pairings moving forward, or perhaps working with the gap in feel that can come into play when big voices sing in a small space (the studio).

To its credit Feed the Sound is a tight, electric release that features interesting material and holds its own with the best mixed collegiate a cappella on the market. It also reveals Purple Haze as a group that's not afraid to go for the jugular. The trick now is to vary that approach so that the big sweeping gestures always serve the style of the song, rather than just being big for their own sake. If Purple Haze can more consistently zero in on the heart of their material, the group will claim their rightful place at the very top of the recording ladder.

Feed the Sound, the latest from perennial BOCA favorites Purple Haze, is full of nice moments and subtle touches — things around the edge of the song that make me smile as I note the attention to detail that's lavished on a song as disposable as Come On Over. Their cover of The Bird and the Bee's Polite Dance Song is full of such touches, an ethereal, creepy piece of mood and style which initially felt like a comedown after the raw energy of The Process but which I have come to appreciate on its own intricate merits. I've never heard a piece quite like it, and it stands as my personal favorite of the album.

I'm most struck by the subtlety of the production aesthetic: it's often heavily produced without ever feeling like production for production's sake. Bill Hare (and producer Ben Lieberman) have layered in some nice bits of guitar effect on the blocks in tracks like You're All I Need To Get By, providing additional color in support of the stylistic choices without overwhelming the inherently vocal quality of the arrangements. Even The Process, with its sped-up computerized-sounding interjections, uses the trick fairly sparingly, in pursuit of a single sonic idea.

This is a group that knows how to have fun, and Purple Haze's energy and playfulness sold me on pop fluff like I'm Outta Love and Superhero. Woodstock, with its "crazy fish" interlude, sounds like it was a blast to record, really capturing the mood of the song. You Don't Know Me, though, almost feels a bit too playful. The song comes off as twee and overly gimmicky, with the block sounding strangely stilted at some points and just plain whiny in the bridge. I give Purple Haze credit for trying some different things here, but the overall effect is a miss for me, the flip side of the interesting collection of vocal filligree that makes Polite Dance Song so excellent. But in Purple Haze's hands, even a miss is still pretty good.

The album is front-loaded with tracks with their own stylistic signature: Woodstock, The Process, Polite Dance Song, and You're All I Need To Get By. The back half of the album is less distinct: the En Vogue Medley feels pretty similar to I'm Outta Love, and Cathedrals hits some very similar notes to Fake Plastic Trees and Coming Home, ultimately suffering by comparison. If Purple Haze is going for the "eclectic" model, I'd prefer that the group go all the way with it, but if not Purple Haze at least needs to make sure that there's a unique stamp for each song. But this is, on the whole, another strong album from a perennially strong group.

Albums like this make me glad I'm a reviewer. Purple Haze's latest release is right up there in the top tier of recent a cappella recordings, and you'd better prepare yourself for the experience of listening to it, because it's one hell of a ride. There's so much ear candy on this album from start to finish that you'd better have a killer set of speakers to listen to it on, or else you're simply not going to get the full effect of producer Ben Lieberman's and mixing engineer Bill Hare's soundscapes.

But what about the singing? Top-notch. Ben Lieberman would not have been able to edit such clean, immaculate-sounding tracks without the audio already being close to flawless on the way in. Percussion is similarly excellent almost across the board, sounding refreshingly natural while remaining consistent. A few tracks have snares that have devolved back toward the Off the Beat sneeze-snare that most of us would like to forget, but it appears rarely and really only becomes distracting if you're the kind of person who listens to a cappella drums a lot.

Where things start getting weird — and I mean that in the best way possible — is in the style of the album and its cohesion. With such a disparate spread of songs from different genres and eras, you'd expect the album to sound a little disjointed. It does ... but all in the same way. Let me clarify: the album is cohesive in its non-cohesiveness. Making a collegiate a cappella album is almost always a battle between genre and variety, where flow is what brings the album together. A lot of the songs on this album are weird by nature. Woodstock has an underwater choir break in the middle. This is immediately followed by The Process, Purple Haze's cover of a cacophony of 8-bit synthesizers and guitars by I Fight Dragons. Buried near the end of the album is a hilarious whiny, nasal chorus of what sounds like caroling grandparents on You Don't Know Me.

With all this strangeness in the middle, Purple Haze still manages to convincingly start their album with a kickass version of pop/radio standard Come On Over, and keeps you listening through all twelve tracks. Feed the Sound moves from one song to another almost effortlessly, so kudos to the group on making the track order work.

The only reason I have to mistrust this album is just how perfect it is. The girls really let go and rip on their leads, particularly Melissa Channick on Come On Over and Meredith Applegate on You're All I Need To Get By. I don't know who the lead on Free Your Mind is in the En Vogue Medley (specific solos aren't listed), but she is absolutely going off, and I could listen to her all day. However, the guys seem to default to more disconnected, Broadway-esque leads that seem stylistically inappropriate for the material. They're great singers, for sure, but it sounds like most of them are concentrating too much on singing notes instead of singing music.

Christian Gero and John Park's turns on Fake Plastic Trees and Coming Home are exceptions to this rule. Gero has a real sadness behind his lead, and Park's longing and yearning lead and arrangement are as gut-wrenching as I've heard in recent memory.

Take the time to listen to this album over and over. I was almost worn out after my first run-through of the album, so I took a break from it for a week. That was back at the end of October and it's been in constant rotation in my car stereo ever since.