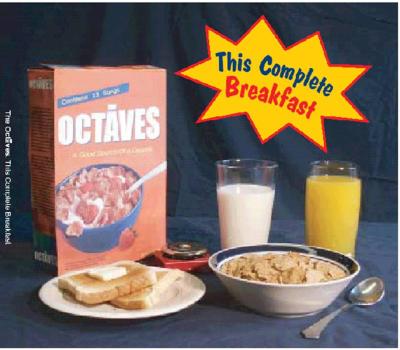 The Octâves choose an ambitious album title, claiming that they are not just part of a complete breakfast, but the whole thing, no preservatives or additives needed. A disappointment, then, that the disc starts off so lamely, with Alabama's timeworn I'm In a Hurry: nice harmonies, but too slow, too young to get things rocking from the get-go. (I don't understand why the song has suddenly become popular among a cappelloids. Was it ever good?)

The boys bring a similar feel to the follow-up, Mona Lisa, and immediately are in better form. The first two songs together sum up the disc's feel: all over the map, musically and in terms of interest and energy. In general the group is stronger on naturally slower, more heartfelt pieces, and loses something (sometimes a great deal) on faster, poppier tracks. Stronger: One Headlight. Weaker: a bargain-basement The Longest Time (another song that, like the opening track, is begging for retirement); a dull Good Ol' A Cappella as if sung by Alabama (When the last soloist tries for a blowout, he improvises "soul to soul to soul" ... just what is going on here?).

Baritones and second tenors are more often out of tune than the rest, and more often to uncomfortable effect (e.g. the first few melismatic notes of One Headlight, an otherwise moving and atmospheric rendition; the second-tenor split just before the lead on Someday). In general the tone tends to mushy, schmaltzy. If they were drums they'd have no attack. Where is the punch? Where, as the cover begs, is the protein in this complete breakfast? The amino acids? The hot sauce for the eggs?

Beginning with the packaging, the boys show honorable restraint in the humor for which all-male groups are famous. Regulate has an amusing opening homage to the Regulators of "Young Guns" fame. I Can See It In Your Eyes (an original!) marries a delicate melody and feel with lyrics bordering on lewd.

And that fence-sitting on the humor borderline leads back to the bottom line: The Octâves sound like an emotional bunch, sensitive modern boys (their best songs are odes to female friendship) who won't risk real offense and thus don't really rock. Even choruses and crescendos come across sounding like "a cappella unplugged". Next time, this promising group should skip breakfast, get to the studio cranky, and let 'er rip.

The Octâves are an all-male group with a natural, unadorned sound. This Complete Breakfast is their sixth album since their founding in 1990, which surprises me. The album sounds under-rehearsed. I'm a fan of honest recording, but there's no question that it's harder to do. If you're going to record what you actually sound like, you better sound damn good.

There are bright spots. I enjoyed several of the soloists, especially Tom Gregorio and Brent Miller. I like to see a college group pay homage to the genre's roots by tackling a barbershop number. Yet every track lacks polish. Sometimes the block has breath support trouble (I Can See It in Your Eyes); sometimes the basses are sharp on the low notes (I'm in a Hurry); sometimes the chords don't lock (The Longest Time). Everything comes together at times, so it can't be a talent issue. The rough corners just needed more time and more hard labor.

Another problem lies in the energy department. The Octâves' feel fits better with mellower numbers like Eileen's Song and the album highlight, Mona Lisa. Rock and pop songs like One Headlight are lethargic, lacking the vibe the songs need. Regulate and Eleanor Rigby are almost comically square (despite a respectable rap on the former).

The Octâves have the skills to do better than this. Do they have the work ethic? Time will tell. In the meantime, I can only call this album average.

The packaging is excellent.

Now, that's not to say that it's the best aspect of the University of Richmond Octâves' newest recording This Complete Breakfast — it isn't — but the overall thematic design is one of the best that I've seen in a while and definitely worthy of prominent mention. They integrate the cover art, liner notes and CD label into a spectacular marketing tool for the group of 21 men represented on this disc.

The rest of the album isn't half-bad. The guys can sing. And anyone picking up this album will enjoy the voices. No one really stands out either way, which is a good thing because that means you can't blame one person for completely derailing the rest of the recording.

The problems come from song selection and the multi-year recording techniques that they used. There isn't a consistent sound quality on the tracks. While not going to the production extreme of say Code Red by The Bubs, the songs vary from the clean, unadorned tracks of yesteryear with some half-hearted attempts at mid-range production values: bit a reverb here, some auto-tuning there, several overdubs scattered hither and yon. That just doesn't bode well for consistency, especially when you do a song like My Evaline that just sounds desolate and barren against the rest of your tracks, even the live version of Shenandoah.

The differing recording techniques weren't the only jarring aspect of the recording. I mean, I'm lenient and I appreciate the need for variety in collegiate a cappella song choices. Unless you are a specialized — dare I say marginalized — group like (insert the name of any number of groups that we all know here), then you have to have a pretty vast array of performance choices for your audience.

BUT YOU DO NOT HAVE TO RECORD THEM ALL!

At the moment, I can't imagine anything scarier than looking at the track list of a recording and first, seeing The Longest Time and Good Ol' A Cappella on it (not to mention If I Ever Fall In Love Again... damn, I mentioned it...) listed, but to make matters worse, secondly seeing Longest sandwiched between the rap Regulate and The Wallflowers pop pablum One Headlight. I was about to give yearbook recordings a bad name, but not even on a snapshot of your school year should those two titles appear as even a thought of being digitized as tracks. Those two songs are so deeply embedded into the lexicon of collegiate a cappella, that unless a group has tweaked the original within an inch of it's life, that is six minutes of time and money no one is able to get back. Even a solid performance seems substandard with that kind of baggage being carried with it.

I know I continue to pick on Billy Joel songs, but having been in a group in the early '90s, I no longer like his music. Hearing that song just brings back nightmares. Choose a song in the same vein but not as overdone, like Movin' Out. He's got a ton of songs (there's even a Broadway musical)!

The group understands exactly what I'm saying as they prove with their Guster and Beatles selections. Guster has become the Billy Joel of the '00s and I'm still torn choosing my favorite among the three covers of Either Way that I have, so for The Octâves to turn in a hot rendition of Mona Lisa, I am more than pleased. Eleanor Rigby is my favorite Beatles' song. They do not disappoint.

I'm even giving the group props for the original song they have on the disc! I Can See It In Your Eyes has some nice lyrics by budding writers Jeremy Darling and Mark Naylor. Currently, the song is set in that this is how you write a pop song/boy band vein, and I that if they recast in a more R&B or Jazz setting it would be much better.

One serving of This Complete Breakfast, while not essential, is a healthy addition to your collegiate a cappella diet.

For ordering info, contact The Octâves by email or send mail to