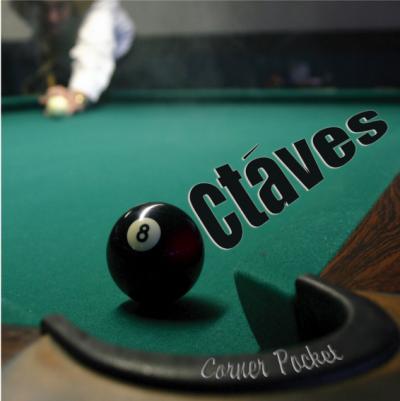 I took a look at the comments from RARB reviewers about The Octaves' last CD release This Complete Breakfast and I'm in a quandary: the group responsible for Corner Pocket claims to be the very same Octaves, but if they are, they've come a million miles from where they were back in 2003.

If they sounded underrehearsed before, they're polished and professional now (with The Luckiest perhaps the one exception). If their tuning was faulty in the past, either better singing or the first-rate production by Dave Sperandio has taken care of that. If their ballads were their strength and their energy was lacking, better song choices, better arrangements and some fabulous VP work from multiple group members (again, with the able assistance of Mr. Sperandio) make that criticism a thing of the past.

Indeed, the name "Octaves" doesn't really do these guys justice. On this album, with apologies to Sean Altman and the gang, they might as well call themselves the "Groovebarbers" for the rock-solid and "thumpalicious" (a word I learned from Gabe Mann way back when) grooves that are featured on the uptempo tracks that make up the bulk of the album. A fair of amount of the credit must go to Sperandio as this is a processed sound to say the least, but unlike the Logarhythms from MIT, the humanity is not lost and an effective, if delicate, balance is struck between what is man and what is machine. Ironically, given some of the comments from their last album, it's the ballads on this album that suffer a bit by comparison — the aforementioned The Luckiest doesn't even sound like it was sung by the same group, and even the nicely-rendered I Believe is a notch or two below the rest of the pack.

If there is a criticism to be made, it's in the lack of creative development within the arrangements. Virtually every song features a really interesting, ear-grabbing intro followed by a verse and chorus which establish a finger-tapping, head-bouncing groove. Trouble is, the arrangements don't progress much further from there. It is perhaps a tribute to how good the initial groove is that this is not as troublesome as it sounds. But on repeat listenings, it would have been nice to hear a bit more sophistication, complexity and/or variation work its way into the mix as the song progresses into verses/choruses 2 and 3.

But honestly, I'm being a bit nitpicky. This is a slickly-produced, well-sung, truly enjoyable album from an unexpected source and one which I will want to keep and eye (and ear) on in the future. Check 'em out. And look out Virginia Gentlemen. Those boys in Richmond are hot on your tail.

It seems like when I listen to an album by the Octaves, I always come away with one generalizing comment. Unlike last time, my reaction after listening to Corner Pocket definitely has to do with the music.

Why are people still recording Blessid Union of Souls?

The Octaves' version of I Believe mars a truly remarkable album, a vast improvement over This Complete Breakfast. The track is okay, though occasionally strident in the solo. It is deeply earnest and full of the smarmy sappiness required of such an optimistic song. What gets me, if I'm being honest, is the inclusion of the "N" word in the third verse. I guess having matured in an age when my community hadn't reclaimed the word as progressively as the hip-hop artists of today have, that hearing it sung in "mixed" company stings quite a bit. Especially when the drug reference of Green Day's "or am I stoned?" is made fuzzy. Where is the line drawn and why?

That being said, I still believe that the group as a whole graduated to a new level of recording techniques, confidence, artistry and musicality.

Tangled is possibly the most perfect male collegiate a cappella song that I've heard in a number of years. Nearly everything clicks with the track. Like Maroon 5, the guys infuse a deeply sensual element to the track with an eerily unpretentious sexiness. Arranger demigod Dave Raiser creates an orgiastic background bed on which soloist Mike Hinchcliffe and his posse gleefully slip, slide and seduce. I would consider it odd not to find this track on Sing II, BOCA '06 and the winner's list for CARA 2006.

I'm having a hard time believing that this is the same group who just two years ago was recording The Longest Time, My Evaline, Shenandoah and Good Ol' A Cappella as if those songs were cutting edge contemporary pop songs. Looking at the eclectic track listing of the current group (Barrel of a Gun, The Luckiest, Welcome to Paradise, For Me This Is Heaven), the Octaves decided on a definite performance shift which suited them greatly. It reminds me of the mid-'90s transition of the UNC Clef Hangers from the good ol' boy group to the pop-R&B superstars we know today. In fact I wish he Octaves had been able to submit their The Way You Move to BOCA as it far surpasses the Clefs' version. It takes a lot of confidence to move outside of your comfortable paradigm.

'Dio and James Gammon's recording magic is subtly effective and unobtrusive on Corner Pocket. When autotuning is prevalent, it almost seems like an additional instrument and enhancement rather than a pitch-correcting device. The decision to keep some of the voices digitized brings a distinctly energized feeling to songs like I'm a Believer, The Way You Move and Welcome to Paradise, which made them really sizzle.

A group should be so lucky to have a stable of percussionists like the Octaves. Matt Keil's more organic approach paired well with Tom Gregorio's processed spitting to create a pleasantly funky groove to Guster's Barrel of a Gun. Drew Setterberg kicks it up a notch on Tangled and several other tracks not controlled by Gregorio. Mark Naylor and Andrew Nalband prove their mettle on two additional tracks.

Along with Raiser, Gregorio brings his share of stellar arrangements to the mix. His best work are on the alt-punk charts For Me This Is Heaven and Welcome to Paradise. Paradise is possibly one of the most tightly arranged and well-crafted songs that I've heard, capturing the energy of new Green Day with the same sparseness inherent in the original.

The minor fault that I have with the group is that the soloists can always compete with the complexity of the arrangements or composure of the group. They lack a bit in maturity of voice and style to completely command each of their songs. Some are good, some are great, none outstanding.

The cover art of Corner Pocket is a member of the Octaves trying to sink the eight ball in the corner pocket on a long shot. If I were a betting man, I'd wager he makes it; just like I'd wager that you're going to love this album.

I mean, they sing about camel toes, what's not to love?

Richmond, Virginia is one of those places I could never pick out on a map. I've had family that lived there. I've BEEN there. Several times. I even sang with this group, for god's sake. But I still couldn't tell you where it is. This much is certain, though: the Octâves and the University of Richmond are now firmly on the a cappella map, and Corner Pocket got them there.

The album opens boldly, with the brash guitar intro of Guster's Barrel of a Gun: raucous energy and a soloist that outdoes the original make the track cook. Next is Maroon 5's Tangled, now one of my favorite songs, and I haven't even heard the original. Impressive. King of Wishful Thinking is an odd arrangement (sounds like only 6 or so people singing) that just doesn't fit with the rest, but I guess it's good for variety. Carlisle Greaves breathes new life into I Believe, the next track; he puts more into it than Blessid Union of Souls ever could.

The next three tracks are fun, but nothing too special. Welcome to Paradise is memorable only for its inclusion of Basketcase, one of my favorite songs from high school. The Freshman sounds just like the original (not much of a compliment in this case), and Standing Outside the Fire sounds like someone who sounds nothing like Garth Brooks doing his darnedest to try to. It comes across a little silly.

Next up, The Way You Move, my favorite track on the album. Actually, it's the best a cappella version I've heard (sorry, Clef Hangers). From the percussion to the solo to the de-tuned (just like Outkast!) backups, it's amazing how much they capture almost every essence of the original. But when they ask, "Can you feel that B-A-S-S bass?", all I can do is say, "No." In fact, I don't hear anything out of my subwoofer until I max it out at +7. Now, if it only went to 11...

The final four tracks are just pretty good, but overall, the album is great. It was a pleasant surprise to see this group that was so great live put out such an impressive album. There's a bit of room for improvement, but I don't care. They (and their studio, Diovoce) have outdone themselves, and I can't wait to hear more.