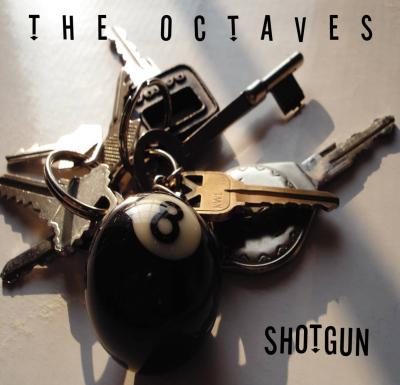 Another year, another album. And with Shotgun, the Richmond Octaves have picked up right where they left off with their 2005 release Corner Pocket. That album received much-deserved CARA nominations for Best Male Collegiate Album and Best Male Solo (For Me This is Heaven) and Shotgun is likely to earn its own fare share of accolades this year.

My vote for BOCA and at least one CARA nomination? The opening Lonely No More — a fantastic, layered arrangement from Dave Raiser. The steady, energetic solo, terrific groove and flawless production make it one of the best all-male tracks I've heard all year. OK, if I have one quibble, it's that it felt just the teeny-tiniest bit slow, but I'm really reaching to find a criticism of this track. Great, great work.

It's a good thing too, because without that song, I'd have to say that Fix You was the best thing about this CD. And given the overwhelming number of Fix You's out there, my praise for the wonderfully tender and controlled solo (by Raiser) and the arrangement's capturing of the build of the first half into the hypnotic instrumental section (also by Raiser) would be subject to challenge by the umpteen other versions out there.

Other gems to be found on Shotgun: Grant Gardner's arrangement and solo on Sold proves that the right song performed with the right energy doesn't necessarily need great complexity to make it wonderfully enjoyable and musically satisfying. And Raiser's lovely solo on Lifehouse's You and Me coupled with an arrangement that develops nicely through the first and second verses into a more expansive and open-sounding bridge actually made me enjoy a song whose original does nothing for me.

Yes, there are some missteps to be found, too: both Thong Song and Come Clean fall victim to a common problem with a cappella covers of hip-hop/dance tracks in that their bass lines and VP overwhelm virtually everything else that is going on. The rest of the arrangements almost don't matter because they can hardly be heard, and what is audible is mostly processed filler effects or block chords behind the beat. Come Clean scores higher because an all-male group offering a pretty good cover of a Hillary Duff song — especially Ben Mertz's alt-pop sounding solo which I prefer to Hillary's — gets some creativity and style points.

All of that said, if not for the occasional solo that strains a bit here and there (Chariot), the occasional errant note in some of the high tenors, and a few arrangements that are ineffective (This Side) and/or monotonous (Barely Breathing) or just a little too straightforward (All These Things That I've Done), the whole scorecard would be "5"s straight across. Indeed, the "4"s are high "4"s and probably would have been "5"s a few years back.

One more bit of praise: the expert work of Dave Sperandio is very much in evidence on Shotgun. What a pleasure it is to hear a sound that successfully navigates the fine line between vocal processing and music that doesn't lose its human sound.

All in all, more fantastic work from the Octaves. I was surprised last year but not anymore. These guys are the real deal and I hope (even with the graduation of the aforementioned Mr. Raiser) they can keep up the good work.

Like the trajectory of a bullet, an album can have an explosive release out of the barrel of a gun, do its major damage at the middle of its flight and become spent by the time of its exit wound. Such is the case with the latest from The Octáves from Richmond University. Shotgun is an album that I really enjoy, but for some reason it doesn't resonate with me as much as their last one.

What seems to be missing for me is heart. The production values are almost too good. The electronic tinge on every track is off-putting, manufacturing a sound that works against the natural ability of the group. I get the feeling that the group was shocked with the accolades and praise that Corner Pocket received and went overboard this time, thinking more processing means a better recording. The "humanness" has been nearly stripped from the group — the very quality that created the "wow factor" previously.

Sold is the most egregious example. The background sounds like it's filtered through tin cans. Highly sophisticated tin cans but tin cans nonetheless. Why? The soloist and backing vocalists are thankfully left to their more natural tendencies. Providing a warmer sonic palette overall would have engaged me a lot more. Then I could have appreciated the brilliance that is Thong Song, All At Sea and Come Clean even more. Those songs were enriched through the processing and gave the album a much needed lift halfway through the album.

Thong Song is the perfect song for the album. Richly layered (especially for a hip-hop song), there is valiant attempt at internal dynamics, and right before the bridge the group almost explodes into glorious release of sound that propels the song to a higher level.

Dynamics! That's what's holding them back. Well, the lack of natural dynamics. Again, an album has been produced where, once the song starts, there is not a viable difference between piano and forte. Each vocal section picks a level and stays there throughout the rest of the song. The only changes occur at the beginning and end of a track when the production team fades the group in and out of a song. Oh, and that one instance in Thong Song. I've talked about my issue with the loud droning in Fix You with TakeNote. The same is true here. The bridge of All At Sea is ridiculous ... so loud and so unnecessary. But it's a Jamie Cullum cover, so they are getting a "5" anyway. And the missed opportunity for the subito-piano into a crescendo during Come Clean makes me cry. Yet the song makes me dance, and the subtle lines throughout the song almost make up for tear inducing moment.

It's a shame considering the arranging talent evident in the group — especially Dave Raiser, Ben Mertz and Grant Gardner — that the musicality isn't given as much attention.

T'were I feeling more generous, this album could have garnered a "5". But groups are going have to show me a much higher level of musicianship than what's being passed off lately. And considering what The Octaves have accomplished with their two most recent albums. I have no doubts about where they are going from here.

Let's face it: reviewing an album is a difficult task, made doubly so on the day a RARB reviewer presents a workshop at an a cappella conference on the subject. And yet it's a responsibility I'm looking forward to, as the Octaves review is due this day and there's much to celebrate. A great track listing, remarkable execution and production, and hearty, convincing soloists make Shotgun an easy "5".

True, there are a few pieces that are overdone; Barely Breathing has outstayed its a cappella welcome, especially in this form with its main background theme arranged in syllables stolen from Insomniac (think "choom-ba-da chimmy chimmy"). Nevertheless, it's appropriately buried between the ubiquitous piece of 2006, Fix You, and the fantastically upbeat country number Sold that is wildly entertaining and cleverly arranged. What keeps Sold on this side of corny is its solid arrangement with complex layering of banjo and fiddle and a great voice-trumental by arranger and lead vocalist Grant Gardner. In this vein, I love the stream of a cappella country emerging from collegiate groups in Virginia — take note, southern schools! On this note I should also note that Come Clean steers clear of self-parody with a colorful arrangement by Ben Mertz and pretty decent solo by Matt Schaffer.

But when you've got pieces like Thong Song and Lonely No More that make me want to jump up and dance, and All These Things That I've Done, brilliantly executed and sharply produced, you know you've got a winner. These songs are engaging, they bring me in to the music with a polished balance between solo and background and a pop sensibility that appeals to all sorts. All At Sea, a jazzy number by one of my personal favorites, Jamie Cullum, has a steady beat with a simple yet effective arrangement on "ooh" that opens into a wide, choral "aah" at the chorus with punctuated pops at appropriate times, making the song a good fit with the overall album sound, especially when the "electric guitar" kicks in at the bridge.

Does Shotgun break into new a cappella territory? I answer with a hesitant yes, but perhaps only with moderate risk on All These Things and Come Clean. It's a fairly safe album, but it's quite listenable and in-the-now, which keeps me coming back to listen despite the piles of other a cappella albums I've got in my reviewing queue.

With a BOCA track already awarded and what I am certain will garner at least a few CARA nods considering the inferiority of the Octaves' previous release to this one, there's really no argument against Shotgun. Not every track is essential, not every arrangement is flawless or free of candy-coating, but it's a neat little demonstration of mastery over the a cappella vernacular. As a reviewer, I relish these albums with widespread appeal that acknowledge their place in the greater scheme of things and stick to their concept without straying too far. A charming album aiming to please, Shotgun makes the job of reviewing a pleasure.

To order this album, email the group; for more information, visit the group's website.