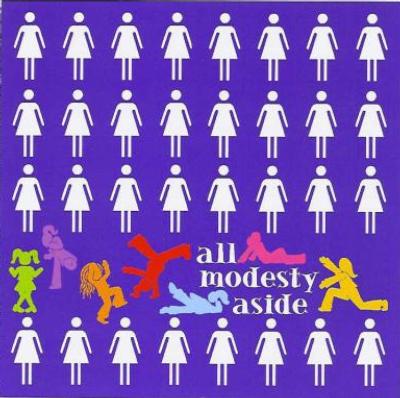 I think I'd enjoy listening to a mix tape prepared by The Chattertocks; their song choices are great. Shakira, Ben Folds, U2 and Wilson Phillips. Not bad. I bet I'd even enjoy talking a cappella with them or maybe having a drink. But in this fictional conversation over fictional drinks, I'd offer George Santayana's admonishment: "Those who fail to learn history's lessons are doomed to repeat them.". As true when applied to a cappella as to warfare.

Specifically, after about 20 years of contemporary a cappella we are simply past that point where "neerrneer", "derr derr", "BOW" and the like are effective substitutes for instruments. They are funny, clown noises and inappropriate if not used as such.

Songs which feature instrumental lines are therefore a challenge to arrange, but falling even a little short here is like seeing the wires helping Matrix characters leap or the surgery lines following a facelift. It's jarring.

As a reviewer, I'm able to put the arranging aside and enjoy the committed soloists and pervasive energy that The Chattertocks bring to songs like Ojos Asi, Release, and One. But a more casual listener might have trouble getting the cream to rise.

At first listen, I just figured I was missing something. The Chattertocks have a rich history of recording excellence (at least as evidenced by their consistency in garnering CARA nominations for their albums). Thus, I was disappointed to find nothing here that would particularly offend or excite the average listener. Not bad, but not so great either.

The fact is, the album runs the gamut from pretty good (Ojas Asi; So Have I For You) to pretty bad (Hemorrhage), but mostly sits right in the middle of decent/average. The ‘Tocks tackle a wide variety of genres with mixed success, tending to falter more on songs originally sung by men (One, Hemorrhage, Escape).

It pains me to give The Chattertocks such average marks when I believe their potential is far greater than what they present on the album at hand. Arrangements are generally interesting and well-conceived; The ‘Tocks have a good sense of pitch and rhythm and sing with decent energy and conviction. However, with few standout soloists and unexceptional production, The Chattertocks are unable to offer up much on this disc that sets them apart from the crowd (particularly when compared against the new standards that groups like The USC Sirens have set for female a cappella).

For better or worse, many groups have embraced the slick, effects-heavy sound that has dominated CARA/BOCA in recent years. The Chattertocks' choice to pursue a simpler, unadorned sound shouldn't be held against them. However, the disc has a thin, at times almost tinny sound that contributes to most of the tracks' failure to take the leap from solid to magical. Many of the harmonies fail to fully lock or sparkle, partially due to a slight imbalance between the leads and backup (e.g., the sop-heavy balance on the Hold On trio). And even without heavy use of effects or production tricks, All Modesty Aside would have benefited from a warmer, fuller sound that would better engage the listener. It's clear to me these girls sing with heart; next outing, I hope that will come through the speakers more cleanly and clearly than this time around.

At the dawn of my college a cappella awakening, I purchased BOCA 1998 at an NCCA show in Boston. Among my favorite tracks was Elsewhere from The Chattertocks' 1997 release Take It to the Bridge, a soulful, airy Sarah MacLachlan tune well-suited to the all-female genre. I was excited for a second dose of simple, moving melodies on 2003's All Modesty Aside, along with a corresponding advance in production values, arrangements, and song selection. All modesty aside, this wasn't the case.

Ladies, the "weer neer neer" revolution of guitar sounds is long over. Without the in-studio mastery and manipulation of vocals and appropriate syllables in the background, many of the songs here come off as amateurish. Nasal and often ineffective imitations of instruments detract from the sweet harmonic theme throughout the album. Case in point: Cowboy Take Me Away, that mainstay of women's vocal groups, opens with a patter of "dmm"s and "da-da"s that creates a simple rhythm and harmony. When the acoustic guitar comes in at the opening and instrumental solo, the translation destroys the melodic female vocal sound with more open syllables. A nice "ooo" or even "la" might have preserved the integrity of the sound better.

Some pieces have a spunk and energy despite sounding mechanical, forced, and even a bit off-tune. I enjoyed the CD's opener, Release, with a respectable performance by Katie Noe on solo and a complex background of "zoom"s, ubiquitous "ner"s, and a sound I can only describe as a vocal meteor shower. Ojos Asi also kept my interest with a clean bass and nice percussion created by three Chattertocks. This fun Latin number best used the energy and vocal talents of the various group members. Overall, I found The 'Tocks were at their best on the lesser-known, non-pop tracks. One, Cowboy Take Me Away, and Hold On all suffered at the hands of overanxious arrangers and performers who seemed restrained, rather than releasing a full expression of the songs' possibilities.

After so many years of albums and even a few good RARB reviews from way back when, I was ultimately disappointed with this, The Chattertocks' seventh album in twelve years. Despite an overwhelmingly cute CD and jacket design, the audio aesthetics on All Modesty Aside don't match the visual. With an average RARB score that has been steadily decreasing, it's surprising the Chattertocks haven't learned from their past. Six years ago, reviewers raved that Take It to the Bridge placed The Chattertocks at the top of the all-female genre. Today, sadly, All Modesty Aside doesn't deserve such praise. A break in the intense biennial recording cycle might help this group to reflect, reorganize, and make it back to being the best in their league.

Please email all album requests to Chattertocks@brown.edu, including the album name and quantity.