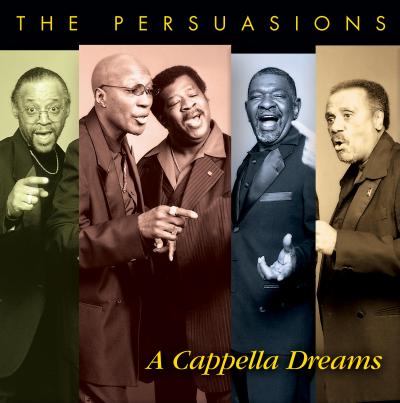 A Cappella Dreams is music with blues at its heart. Here are songs about the struggle for liberation and salvation, for civil rights, songs of life in the ghetto, the angst of love and the need to find your place in the world. The Persuasions always seem to infuse a gritty, gospel-blues and (although they would shun the term) even a "doo-wop" sound to their performances. Their voices and style are a perfect match with these songs from greats like Paul Anka, Lieber-Stoller, Bill Withers, and Otis Redding.

The Persuasions are always the real deal, and in that respect they're deserving of only the highest praise, especially when compared to the endless supply of slickly produced but heartless releases on the market today. Sadly though, in capturing that true earthy sound, The Persuasions sacrifice the precision intonation, blend, arranging and dynamics over which far lesser groups commonly display mastery.

A Cappella Dreams delivers an unaffected, nearly-live sound. Many of their fans crave a release where the power of The Persuasions' soulful deliveries is matched by equally powerful production and musicality. The Persuasions are true stars of a cappella; it's time they were presented in that manner.

With A Cappella Dreams, The Persuasions have returned to the good stuff. This is the stuff they love to sing and sing so well. For all you Persuasions fans, this is a must-have. I like the songs much more than the tracks on The Persuasions' "tribute" albums to Frank Zappa, the Grateful Dead, and the Beatles. The Persuasion's distinctive style is in full effect this time around, and the music is only enhanced.

This is good ol' a cappella: the pure, unprocessed stuff. A Cappella Dreams may have some slightly flat notes, competing vibratos, and simple arrangements, but it also has energy, soul, heart, and a depth that can be lacking on albums with heavy-handed production.

Some of the tracks are delightful, head-bobbing, and toe-tapping, like Good Luck Charm, Dock of the Bay (a great duet), and When She Was My Girl. Other tracks have significant meaning and are sung with great feeling, like I Have a Dream and Steal Away. My only complaint is about the woman saying "oh yes" in I Have a Dream. There are many ways to say that phrase, and many of them would have been better than the strident female voice declaring "oh yes" periodically and sans emotion.

I enjoyed Jim Hayes on In the Ghetto and Jayotis Washington on Please Send Me Someone to Love. Their solos are a refreshing change from The Persuasions' main (and solid) soloist Jerry Lawson.

This is a good album, and definitely one that all Persuasions fans should own. And if you like your a cappella pure and haven't tried out The Persuasions, give A Cappella Dreams a try.

If you've read at least a dozen or so RARB reviews, odds are you've encountered the term "yearbook album" at some point. A yearbook album is a disc which seems to have been created for self-indulgent and/or nostalgic purposes, rather than for the gratification of the discerning a cappella listener. The phrase, decidedly prejorative, is most commonly found in the opening and final paragraphs of reviews of collegiate albums, especially a group's first or second release. But rarely does the term crop up in professional group reviews, especially reviews of albums by legendary, time-tested a cappella stalwarts such as The Persuasions. I'm stunned, frankly, to be considering its use herein.

On one level, to describe A Cappella Dreams as a yearbook album isn't exactly accurate, nor does it tell the whole story. But on other level, it certainly seems apt. No, the music on this album isn't simply a snapshot of a brief period in the life of the group, nor is it a last-ditch effort to capture departing members' solos, as is often the case with yearbook discs. Actually, the album's repertoire spans the group's entire history. The arrangements featured on A Cappella Dreams were often performed for the members themselves, mainly during long car rides, sung spontaneously "to amuse themselves" while travelling. (Talk about a life of singing — they sang on the way to the show, sang during the show, and then probably sang on the way home!) During their multi-decade history, The Persuasions have undoubtedly logged some serious miles, and this album is designed to give you the feeling that you are simply on the road with them. The songs are the members' own old favorites, which makes for a disc that is simultaneously informal, personal, nostalgic, and self-gratifying. These are the basic characteristics of a yearbook album.

I certainly don't wish to be cast as an a cappella heretic, and I mean no disrespect, but the singing on this album showcases a lower-caliber blend than what I would expect from a professional group. Tone-wise and tuning-wise, the group displays a heterogenous sound that I suspect would turn off many listeners. Whether that's just generally understood to be "their sound" or not, I don't particularly enjoy it. Tune after tune, backing voices stick out far too noticeably, while others are not heard nearly enough. The arrangements are simple and anachronistic.

If you're unfamiliar with he Persuasions and you're still considering buying this album, let me warn you about one other facet of their performance. While I can positively say that I enjoy Jerry Lawson's sandpapery pipes, it's much harder to for me to say that I postively enjoy them for 14 tracks in a row. It's the same issue I sometimes have with Rockapella; there is no doubt that Scott Leonard is amazing and impressive, but after a while, you just want to hear someone else take the reins. Of course, if you already love The Persuasions, you'll have more Jerry Lawson than you can shake a stick at, including a few tracks where he sings duets with the bass singer alone (Dock of the Bay, etc.). Who needs background parts, anyway?

There are a few winners, primarily the opener, I Have a Dream, an emotional tour de force by the aforementioned Mr. Lawson. Other praiseworthy tracks include She's a Lady, and Good Luck Charm, which boast a spirit and energy that carry the listener somewhere timeless, which is noteworthy for an otherwise geriatric-sounding disc.

A must-have for any Persuasions fan, and a recommended "skip" for the not-yet-fan.