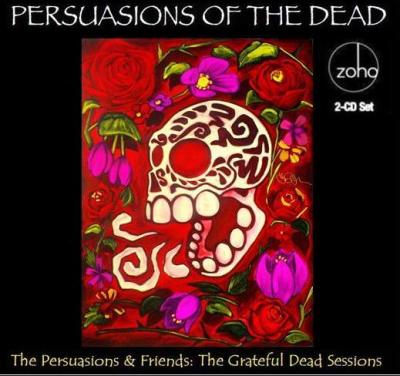 It's true, The Persuasions "still ain't got no band" as Jerry Lawson has many times declared in a raspy shout, but the Persuasions of the Dead isn't strictly a cappella, either. Mandolin (Ripple, Lazy River Road), piano (Bertha, Ship of Fools), harmonica (Sugaree), saxophone (Loose Lucy), erhu (Stella Blue), and electric guitar (One More Saturday Night) all make guest appearances with the most natural, street corner group in a cappella. The album is almost closer to unplugged acoustic folk than a cappella.

Anyone who's ever seen The Dead live will know that soul and emotion were everything. These told the story. Accuracy just wasn't on the list. The band's guitars were often wildly out of tune, but they could still be played with unadulterated heart. No group could hope to better embody this aesthetic than The Persuasions.

If you listen for pitch accuracy or vowel matching then it is you, listener, who makes the error here, just as surely as looking for straight tone in the bel canto competition is utterly missing the point. These tracks are stories that happen to have been set to song, not songs that happen to have a story. The difference is everything and the mindset, essential.

That said, RARB's numerical systems use a comparitive rubric with particular analytics. Scores here reflect the fact that the rhythm is loose, the blend is spotty, and the intonation is universally horrendous, even if this is beside the point. For overall accuracy, this album is a "1". For soul, it's a "5". And for The Persuasions, never the twain shall meet.

Deadheads, take a hit from this double disc dose of the real thing. Persuasions fans, this may be the last time you'll ever hear a Persuasions line-up with original lead, and once-in-a-lifetime talent, Jerry Lawson. Fans of musical accuracy, save yourself the heartache.

Man, sometimes you don't feel equipped to handle the monster that's ahead of you. There can appear to be mountain-sized obstacles that seem daunting at best and insurmountable when you get right down to it. And that's exactly what it feels like to review an album like Persuasions of the Dead by the legendary The Persausions and a few of their high profile and eclectic friends.

Recording a tribute album is never easy. Ask Overboard. If it's a revisionist version, you risk the ire of die hard fans who condemn you for daring to mar the memory of their beloved artist. When you do a faithful recreation of seminal works, you are called to task for not living up to the memory of the original. Then why bother trying when you are never going to be as good?

And it's especially tough when you are crossing genres and styles and instrumentation and all of that. "What do you mean you've recorded The Grateful Dead (the ultimate hippie jam band) songs using old school doo-wop and backing instruments?" Are you kidding me?

Apparently not, as this re-mastering of recording sessions from 1999, with current overdubs in the late '00s is a testament to the fact that The Persuasions weren't kidding at all.

No, this album isn't for everyone. But it should be. Believe it or not, each song sounds like it was written for The Persuasions. There was a connection and knowledge of what they were singing present in each track. Lyrically and musically, I often questioned the fact that these were Grateful Dead songs that I once heard in concert.

In fact, the album is recorded like a Dead concert. The first half includes more linear tracks — songs fully fleshed out and in a more standard format. Whereas disc two comes across as more of the highly inebriated afterparty. A lot more fun for the people in the thick of things, but not as much fun for the people who are not a part of the joy. So for me, the first disc is definitely preferred over the second. And yet, some truly magical moments happen when the guys (and gals) are let loose to really just be. When the special guest artists from Mary Schmary join in the fray, the album just soars.

Modulations aren't made with the utmost of ease (Greatest Story Ever Told). Intonation and blend aren't the best (see most of the album). Soloists aren't up to the task of the melodic line they've been given to deliver. And one song's execution is basically painful (Here Comes Sunshine 1 — the opening track of disc 2). I'm more of a traditionalist (which is funny for me to write) but I'm not real keen on the added instruments here (especially when they are simply repetitive of the vocal line).

But the spirit and loving care that permeates this album is palpable. If you are steeped at all in African American cultural history, Persuasions of the Dead is akin to a Saturday night revival held at Camp Meeting.

Persuasions of the Dead is the re-imagining of a 2000 release by The Persuasions, structured to mimic the experience of a live Grateful Dead performance. At age 22, I can't authentically tell you if that goal has been achieved. What I can tell you is this: The Persuasions have expertly adapted the Dead to fit their style. The result is a dynamic listening experience that will broaden horizons.

Album producer Rip Rense calls the marriage of these two acclaimed artists "a surprisingly natural fit." He couldn't be more right. The combination certainly isn't a no-brainer. It works because these tracks are more than just covers; they're tributes. Each arrangement is designed to draw something new out of the original. Many of them include actual instruments, such as piano, guitar, and baritone saxophone. These minimal features are a welcome addition to the mostly vocal album, adding depth.

Listening to the originals followed by The Persuasions' interpretations is really the only way to do it. You have to hear both to truly appreciate what the group has done here. Jerry Lawson's arrangements complement their original counterparts, highlighting different subtleties of each song. They exhibit a real appreciation for The Dead's work. The soulful solos are well-sung, but gritty enough to be worthy of a band that was not noted for its vocal abilities.

Being far too young to have actually attended a Grateful Dead concert, I tried to listen with my own concert-going experiences in mind. The concept itself is well thought out, and it's a valiant effort in terms of how the album is constructed. However, no recording can match the electricity of attending a live performance. Does it make for a more cohesive listening experience? Sure. Do I feel like I'm standing among a bunch of Deadheads, enjoying Space? Not quite.

If there's one thing that brings this record down a bit, it's the tuning. While not incredibly bothersome, there are certainly a few chords and key changes that struggle to stay afloat. The positive side to these imperfections is that they only enhance the "roots" feel that this album encapsulates. Perhaps an untrained ear would not mind the flat notes one bit. It is worth noting that these discrepancies are most noticeable on Stella Blue, one of only two new songs recorded for this project.

Don't count The Persuasions out because they haven't bought into sampling and Melodyne. Their unique adaptations of other styles prove that there is a right way to put together an album of "covers". You'll understand when you listen to it. When, not if. This is one group of a cappella covers that you need to hear.

This album is available at most online music retailers and persdead.com.