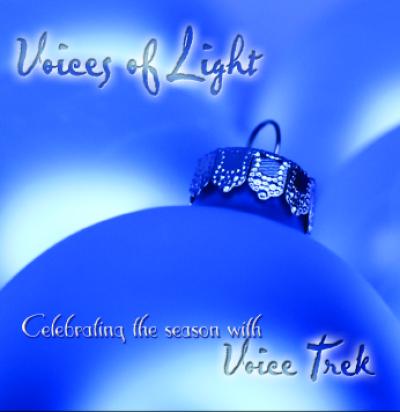 The performances are flawless, but a sure cure for insomnia. There is simply a limit to the number of adagio tempo-ed, freely interpreted tracks I can handle in a sitting. Shockingly, this CD is nothing but.

I completed this release desperately craving the driving element behind all great art: contrast. While Trek has mastered conjuring the sound of a singing cloud, they treat each phrase as gooey taffy to a sugar junkie, every sickly sweet morsel to be stretched and savored. Put another way, each phrase has a gorgeous arch, but the songs have few, and the CD has none.

If you seek the zenith of glacially passive Christmas music, you have found it, as beautiful and still as fresh snow on Christmas morn.

Clearly a talented group, Voice Trek has put out a dud of a Christmas album. Taken sonority by sonority, the album is quite beautiful, but it is thoroughly boring from beginning to end, and after four listens, I have yet to stay awake through the whole thing.

Slick: Tuning and blend are flawless, but the result is antiseptic rather than incandescent. Parts are overdubbed four or five times to create a cold, too-perfect choir. Hideous MIDI backups further dehumanize about half the tracks. Feel, expression, and dynamic contrast are curiously absent. Kristin Brinkmann turns in some lovely violin playing on a couple of songs; her contributions provide the only life on the album.

Slow: Listening to this album reminds me of watching slow-motion video; not a single song goes beyond a glacial adagio. Even Snowfall, which I'd previously known as a midtempo swing number, gets the slow treatment here. You'd better be damned musical if you're going to make me listen to 57 minutes of the aural equivalent of watching grass grow. And maybe Voice Trek is that musical, but the overly slick production makes it impossible to tell.

Also, for a group that calls itself a vocal jazz group, I was disappointed by how closely their arrangements stick to the standard ones. Maybe they were trying to put out a more "traditional" holiday disc, but I'd nonetheless recommend that they listen to New York Voices Sing the Songs of Paul Simon, my favorite vocal ensemble album of all time, to learn a thing or two about radically reinterpreting an old song without being untrue to its spirit. Some interesting moments do pop up here and there, and the group proves itself quite able to handle tricky jazz harmonies. Therefore, I'd be very interested to hear what else Voice Trek has to offer; to be fair, Christmas albums are not exactly conducive to musical risks or variety.

When compiling your holiday gift list, skip this unless you know a store owner who needs some nice, pretty, unobtrusive Muzak to play while people shop. If you're in the market for a truly interesting and unique holiday a cappella disc, I humbly suggest Chicago A Cappella's Holidays A Cappella Live.

Voice Trek's latest album is what I like to call passive listening. It's the kind of music I put on in the background when I need to take a relaxing bath, study, or fall asleep. That being said, there's absolutely nothing aurally disturbing about it that would shake my meditative state. For someone whose collection was barren of semi-classical and Christmas selections, I am delighted to make Voices of Light the first addition.

The thing is, though, this album is nearly TOO perfect. No one song stands out above any other. The voices sound almost synthesized in some pieces, kind of like the way my friend could pluck out notes on her Casio when we were in fourth grade. The songs don't particularly move me spiritually in this form, as they barely sound human. The vocals are so breathy they nearly blend seamlessly into the piano, violin, or other instruments behind them. I half expected it to be played behind the Yule Log on television this holiday season.

The sound is eerily beautiful, lulling and calming. It's difficult to pick out any highlights, as the music is well-tuned and incredibly stable throughout the album. Its semi-classical feel is both warm and inviting. I particularly enjoyed the jazz chords in Lo, How A Rose E're Blooming as a nice departure from the typical holiday fare piped through every mall, and The Coventry Carol features a lovely soprano solo.

With lots of oohs and ahhs to go around, Voices of Light is anything but innovative in the realm of a cappella (especially because nearly half the tracks feature instruments). With good arranging, much of what is achieved here through the use of instruments could have been done entirely with voice. For example, Silent Night's use of violin as a solo instrument might have translated well into a tenor solo. The Wexford Carol, done entirely a cappella, pulls this technique off nicely. So purists, be forewarned: there's a lot of non-vocal elements on this album. Nevertheless, while I'm not a huge fan of this album, Voice Trek's latest addition to the holiday collection will be welcomed by vocal jazz enthusiasts.